You are using an outdated browser. Please upgrade your browser to improve your experience.
by Bryan M. Wolfe
February 24, 2014
If he had lived, Steve Jobs would have turned 59 today. In recognition of Jobs’ birthday, we've sifted through the video archives to find some awesome clips about, and featuring, the late Apple co-founder. We hope you enjoy.

In 2005, Steve Jobs gave one of the greatest commencement addresses in recent history. In it, Jobs discusses key events that had shaped his life. One of the most famous quotes from the address is this:

I didn't see it then, but it turned out that getting fired from Apple was the best thing that could have ever happened to me. The heaviness of being successful was replaced by the lightness of being a beginner again, less sure about everything. It freed me to enter one of the most creative periods of my life.

The Mac is introduced

Jobs founded Apple alongside Steve Wozniak in 1976. It wasn't until 1984, however, that the first Mac was introduced. Take a look: http://youtu.be/MQtWDYHd3FY

A Stevenote was never complete until he mentioned "one more thing." Among the products introduced this way were the colorful iMac (1999), the iPod mini (2004), and FaceTime video calling (2010). Jobs' final "one more thing" was iTunes Match in June 2011, just four months before he died. Take a look: http://youtu.be/hvlHi7iTdaw

On Twitter, Apple CEO Tim Cook left two tweets today about his old friend and predecessor. Both show that Jobs' vision has not been forgotten at the company he loved.

Remembering Steve on his birthday: "Details matter, it’s worth waiting to get it right." — Tim Cook (@tim_cook) February 24, 2014

Remembering my friend Steve on his birthday. "Stay hungry, Stay foolish". We honor him by continuing the work he loved so much. — Tim Cook (@tim_cook) February 24, 2014

We leave with the fantastic video Apple released to commemorate the first anniversary of Jobs' death: Take a look: http://youtu.be/dInYmYI7Q20 Happy Birthday, Steve. 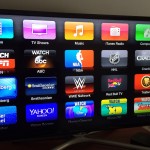 The WWE Network Launches On The Apple TV And iOS Devices
Nothing found :(
Try something else