You are using an outdated browser. Please upgrade your browser to improve your experience.
by Bryan M. Wolfe
February 17, 2014
Apple has seeded beta build 13C62 of the upcoming OS X Mavericks 10.9.2 release to developers. This is the seventh OS X 10.9.2 beta, and comes just days after the previous seed was released. Once again, Apple is asking that developers focus on Mail, Messages, graphics drivers, VoiceOver, VPN, and SMB2 in this release. As we explained in a previous article, here's what Apple has changed in OS X 10.9.2:

The latest beta can be downloaded using the Mac App Store, Software Update, or from Apple's Developer website. We'll keep you updated with further information concerning the update as we receive it. 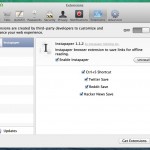 Betaworks Rolls Out Enhanced Instapaper Safari Extension For Mac Users
Nothing found :(
Try something else