You are using an outdated browser. Please upgrade your browser to improve your experience.
by Bryan M. Wolfe
April 3, 2014
We’re down to the Final Four in men’s college basketball. Connecticut, Florida, Kentucky, or Wisconsin will take home the prize on Monday, April 7. Which fans are the most destructive with their mobile devices? ProtectCELL has the answer. According to a new study, Florida Gator fans are clumsier than UConn supporters. As such, they are 48 percent more inclined to need a replacement smartphone or tablet. On the other side of the bracket, Wisconsin fans were found to be 31 percent more destructive with their mobile devices than their Kentucky counterparts. According to ProtectCELL Chief Marketing Officer Scott McLaren:

With the tournament coming to a close, we are sure to hear new stories of mobile devices lost or destroyed along the way. ProtectCELL is happy to offer mobile protection plans for our less fortunate Wisconsin and Florida fans – and anyone else looking to protect their device during the heat of battle – this tournament season and beyond.

The Final Four kicks off on Saturday, April 5 at 6:09 p.m. EDT when (7) Connecticut meets (1) Florida. Following this game, (8) Kentucky and (2) Wisconsin play. The winners of each game will meet in the 2014 NCAA Men's Basketball championship game on Monday night. 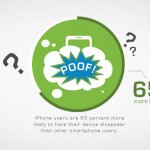 A New Survey Shows iPhone Owners Are Luckier Than Other Smartphone Owners
Nothing found :(
Try something else