You are using an outdated browser. Please upgrade your browser to improve your experience.
by Bryan M. Wolfe
April 21, 2014
Mobile payments upstart Square is running out of cash and looking to sell its business, according to The Wall Street Journal. This news follows a report earlier this month that said Square CEO Jack Dorsey would like to sell his company to Apple. According to this most recent report, Square is bleeding cash and seeing its losses widening. As a result, the San Francisco, Calif.-based company has discussed a possible sale to “several deeper-pocketed rivals,” including Apple and Google, in recent months, according to “people familiar with the matter.” The Wall Street Journal says Google and Square discussed a possible acquisition earlier this year, but "it isn’t clear whether the talks are continuing.” Square representatives also had “informal” discussions abut a deal with Apple and eBay in the past. Those “conversations never developed into serious talks.” On April 9, Re/Code said both Apple and Google have considered making acquisition offers for Square in the past year. In recent weeks, “acquisition rumors have run rampant for Square, including chatter among its competitors, with Google being named as the most likely acquirer.” Apparently this hasn’t sat well with Square CEO Jack Dorsey who would like a sale to Apple, believing that his company’s “design aesthetic and values” match more closely with the maker of the iPhone. Dorsey is the co-founder and co-creator of Twitter. He founded Square in 2009. In January, Apple CEO Tim Cook hinted that his company was working on a mobile payment system that works with Touch ID. At the time, it was noted that PayPal, not Square, could become a partner in this endeavor. 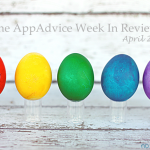 The AppAdvice Week In Review: The Next iPhone, 'iPad Air 2' And Other Apple News
Nothing found :(
Try something else