You are using an outdated browser. Please upgrade your browser to improve your experience.
by Bryan M. Wolfe
May 16, 2014
In April, Pioneer became the first company to announce it would bring Apple CarPlay to the aftermarket. This week, the first demos of Pioneer’s new system have been published by MacWorld and DigitalTrends. So far, the reviews have been mostly positive, with Digital Trends summarizing:

Having played around with it, I totally want it in my car, and I think others will feel the same. There’s no way to tell just by looking at the screenshot just how much easier CarPlay makes using an iPhone while driving. It is exponentially safer, and a ton of fun to boot.

MacWorld reminds everyone that Apple's product isn't finished quite yet:

CarPlay isn’t a final product yet. Both in the prototype I saw at Mercedes-Benz a few weeks ago and in the Pioneer demo this week, ambient noise distracted Siri. Pioneer’s Cardenas said that as the CarPlay technology continues to undergo tweaks, Siri will acclimate to your car’s sounds—the whoosh of the air conditioner, the hum of the engine (the sound of your kids bickering in back?)—and learn to distinguish your voice from everything else.

CarPlay will be available from Pioneer through a firmware update for the AVIC-8000NEX ($1,400), AVIC-7000NEX ($1,200), AVIC-6000NEX ($900), AVIC-5000NEX ($750), and AVH-4000NEX ($700). Each receiver is already on sale at authorized Pioneer Car Electronics dealers nationwide, including Best Buy, Crutchfield, and Car Toys. Apple CarPlay was first unveiled in 2013, and arrived this past winter with the iOS 7.1 update. The feature will first be available on select car models from Ferrari, Honda, Hyundai, Mercedes-Benz, and Jaguar. Twelve other carmakers have signed on to offer the software in the future, which promises users “a smarter, safer way to use your iPhone in the car.” 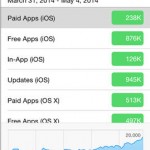