You are using an outdated browser. Please upgrade your browser to improve your experience.
by Bryan M. Wolfe
June 27, 2014
Apple is ceasing Mac development of Aperture and iPhoto. The recently introduced Photos for OS X will serve as a replacement, according to 9to5Mac. Cupertino notes:

With the introduction of the new Photos app and iCloud Photo Library, enabling you to safely store all of your photos in iCloud and access them from anywhere, there will be no new development of Aperture. When Photos for OS X ships next year, users will be able to migrate their existing Aperture libraries to Photos for OS X.

In another report, TechCrunch says that Apple will offer an OS X Yosemite update for Aperture, but otherwise development has ended. Apple has not announced what happens to iPhoto for iOS once the Mac version is retired. As 9to5Mac concludes, “its outlook doesn’t seem good.” Development on Apple’s Logic and Final Cut Pro will continue as normal. First announced at the Worldwide Developers Conference (WWDC) earlier this month, Photos is a new application coming with iOS 8 this fall and OS X Yosemite in early 2015. With Photos, videos and photos are now stored in a new iCloud Photo Library. These files are accessible across multiple devices. Under the current system, Photo Stream, shared photos must be stored on each device. 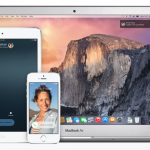 Continuity Feature In iOS 8, OS X Yosemite May Be Coming To The Apple TV
Nothing found :(
Try something else