You are using an outdated browser. Please upgrade your browser to improve your experience.
by Bryan M. Wolfe
July 9, 2014
Apple is once again feeling some heat over accessibility. The National Federation of the Blind (NFB), which successfully sued Apple over iTunes, is now turning its attention to the App Store. Members of the organization recently approved a resolution to press Apple to create and enforce accessibility standards for apps, according to Reuters. In 2008, thanks to pressure from the NFB, Apple began adding captions and other accessibility improvements to iTunes. Since then, many of these features have been added to the iPhone/iPod touch, iPad, and Apple TV products. These features, however, only relate to each device's operating system. There are no accessibility standards for the third-party apps that run on those devices. Though the NFB passed a resolution, there is a divide within the blind community on how to proceed. Michael Hingson, who serves as a board member for the National Association of the Blind’s California chapter, believes litigation is “the only resort.” Chris Maury, whose Conversant Labs builds apps for the visually impaired, suggests taking a different approach, explaining:

I try to lead with the carrot and not the stick. It’s better to inform developers that accessibility is the right thing to do and an opportunity to reach a whole new base of users. It shouldn’t just be about compliance or avoiding legal risks.

Attorney Daniel Goldstein, who represented NFB against Apple the last time around, says the 2008 action could provide a model for a suit focused on apps. The Federation, at least for now, says no lawsuit is being considered. As part of the 2008 settlement, Apple paid NFB $250,000. Though Apple has yet to comment on the NFB resolution, Tim Cook did address accessibility during a 2013 speech at Auburn University. The CEO described people with disabilities "in a struggle to have their human dignity acknowledged," adding "They're frequently left in the shadows of technological advancements that are a source of empowerment and attainment for others." Personally, I think Apple should take the lead on this and implement an accessibility standard for apps. And do so voluntarily and without litigation. 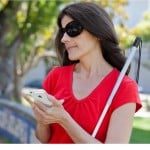 National Federation of the Blind reaffirms Apple's stance as 'accessibility champion'
Nothing found :(
Try something else