Some iPhone 6 Plus owners are reporting that their handsets are bending after they have been placed in their pockets. The problem comes less than a week after Apple released the 5.5-inch handset. The issue is now being discussed on the MacRumors forum.

THIS! I test this in a front pocket sitting down and I could swear it was bending. You felt the pressure points on the ends. Clearly if I got the plus I’d never be able to sit at a table with it. This is bringing back the holster.

Yesterday, I left at 10am with the iPhone in my left FRONT pocket of my suit pants. I drove 4 hours to a wedding, which also involved a lot of sitting during dinner etc but also 2-3 hours of dancing. I left at 2am and went to bed, driving home 4 hours back.

So in total, the 6 Plus was about 18 hours in my pocket while sitting mostly.

As I lay it on the coffee table and sat down on the couch to relax from the drive (yes, sitting again ), I saw the reflection of the window in the iPhones slightly distorted.

The iPhone 6 and iPhone 6 Plus are the thinnest handsets Apple has ever produced. The former is just 6.9 mm, while the latter is a tad thicker at 7.1 mm. The iPhone 6 Plus is also rather long, coming in at 158.1 mm.

As an iPhone 6 Plus owner, I have yet to experience this issue. So far, my biggest concern is that I’ll drop the device.

My advice: put a sturdy case on your new phone — or don’t put it in your pocket. Otherwise, you might have some problems. 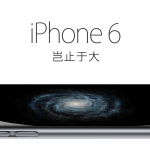 Apple PR saves Tim Cook from discussing 'iTV'
Nothing found :(
Try something else