You are using an outdated browser. Please upgrade your browser to improve your experience.
by Bryan M. Wolfe
October 21, 2014

On Monday, Apple announced another quarter of record iPhone sales. At the same time, iPad sales once again dropped. How can Apple turn iPad sales around? Here are some thoughts:

It wasn’t that long ago when buying an iPad meant purchasing the latest and greatest model, or last year’s device. Heading into 2015, Apple is now selling five iPad models, including the recently announced iPad Air 2, iPad mini 3, plus the iPad Air, iPad mini, and iPad mini 2.

This is too many choices.

I already noted that Apple’s release of an iPad mini 3 was a terrible move, as was the decision to keep the original iPad mini around.

At the minimum, Apple should only be offering the iPad Air 2, iPad Air, and one iPad mini model. Ideally, that smaller model would be the iPad mini 3 which would look a little bit less silly when it isn’t sitting beside the less expensive (and equally powerful) iPad mini 2.

One of the reasons often cited for slowing (or declining) iPad sales is that people simply don’t see the need to upgrade. Apple tablets are made to last, and as the iPad 2 shows, upgradeable to the next version of iOS for a long period of time.

In the future, Apple should ditch annual iPad updates, and instead put them on a two-year schedule.

This year, Apple was wise in releasing the iPad Air 2. However, they should have left the iPad mini 2 alone and waited until 2015 to offer a serious upgrade for the 7.9-inch tablet.

Following this renewed schedule, the 9.7-inch model wouldn’t be updated again until 2016, followed by a new iPad mini version in 2017.

Right now, developers can only make apps that are compatible with iOS versions, not the devices themselves. In other words, if a game is iOS 8-compatible, developers are pressed to make sure it works on all devices that support that iOS version. In not doing so, developers often suffer the wrath of users (in terms of App Store ratings), even when they spell out that the game has not been designed to run on older devices.

This is nonsense and actually forces developers to dumb down apps so that they work across multiple devices.

Moving forward, Apple should make it far easier for developers to draw the line on compatibility between devices. For example, if the hottest game in the App Store won’t work on the iPad 2, Apple shouldn’t allow it to show up for those users in the store. Seeing the omissions piling up may force users to upgrade more often.

Earlier this year, Apple and IBM announced a sweeping partnership that will bring IBM services to iOS devices. As ZDNet recently noted, this type of partnership is great for both companies, and could lead to an “iPad recovery on deck.”

Jefferies analysts Sundeep Bajikar and Mark Lipacis said the deal could bring in 42 million new users for Apple, many of these on iPad.

These are just a few of the ways Apple could jumpstart iPad sales, but there are many more. What are you thoughts on this? 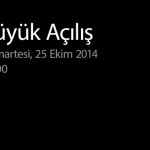 Apple to open second retail store in Turkey on Oct. 25

Demand for iPhone 6 Plus in China prompting Apple to shift production away from iPhone 6
Nothing found :(
Try something else