You are using an outdated browser. Please upgrade your browser to improve your experience.
The People Behind Apple
by Jeff Byrnes
March 3, 2015

Does the world need another biography of Steve Jobs? Perhaps it doesn’t need one, but according to Daring Fireball’s John Gruber, the upcoming book, Becoming Steve Jobs, is “the book about Steve Jobs that the world deserves.”

Brent Schlender and Rick Tetzeli have penned the biography, due out in October, based on Schlender’s more than 25 years of interviews with Steve Jobs as well as interviews with those closest to the man. The book makes it clear that Jobs and Schlender had a very personal relationship, and that association ties heavily into the writing of the book.

Schlender has written about nearly every major figure and company in the tech industry, and Tetzeli is the executive director of Fast Company. Together, the two have more than 45 years of experience reporting on the tech industry.

Schlender and Tetzeli describe Jobs as a man, and also provide a wealth of insight into the industry Apple leads. The two authors have also garnered a surprising amount of cooperation from colleagues and friends of Jobs, such as Tim Cook and his widow, Laurene Powell Jobs.

Gruber points out that the book is “an accurate, engaging retelling of the known history of Jobs’s life and career,” but the book does not stop there. There is also a significant amount of new reporting, with stories that Gruber says will be sensational.

Becoming Steve Jobs is due in bookstores on March 24, but you can preorder your copy now. 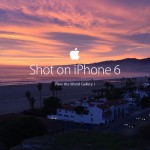 Apple unveils a gallery of stunning photos from around the world shot with an iPhone 6
Nothing found :(
Try something else