You are using an outdated browser. Please upgrade your browser to improve your experience.
Apple On The Street
by Bryan M. Wolfe
March 6, 2015

Apple is already the world’s largest company. Later this month, they’ll be one of only 30 companies that make up the Dow Jones industrial average. Apple will replace AT&T on the Dow on March 18, according to The Wall Street Journal.

The iPhone maker will be one of six technology-based companies on the Dow, which first launched in 1896. The others are Cisco, IBM, Intel, Microsoft, and Verizon.

The Dow was last updated in 2013 when Goldman Sachs, Nike, and Visa replaced Alcoa, Bank of America, and Hewlett-Packard.

In January, Apple announced net income of $18 billion, the largest quarterly profit on record, thanks to iPhone 6 and iPhone 6 Plus sales. This has helped propel Apple stock to new levels.

With a market cap of nearly $750 billion, Apple is currently the world’s largest publicly trade company. Year to date, Apple stock is up nearly 18 percent; year over year, it’s up almost 60 percent. 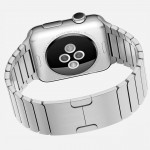 Apple could allow personalized engraving on the Apple Watch

Apple is reportedly planning to unveil the revamped Beats Music streaming service at WWDC in June
Nothing found :(
Try something else