You are using an outdated browser. Please upgrade your browser to improve your experience.
All Things Mac
by Jeff Byrnes
March 9, 2015

When you’re out in the wild, you see Macs everywhere now. The definition of portability has changed, so Apple wants to keep innovating. “We challenged ourselves to reinvent the notebook, and we did it. And here it is.”

Cook turned over the stage to Phil Schiller. “This is the most extreme and efficient notebook we have ever created, and it took reinventing every technology in it.”

The new MacBook weighs just 2 pounds, and is 13.1 mm thick. This is 24 percent thinner than the previous MacBook Air. It features an all-metal enclosure with antennas integrated right into the enclosure. The full-sized keyboard goes all the way to the edge; defining the size of the computer.

The keys on the keyboard feature a new butterfly mechanism. A single assembly with a stainless steel dome. The new keys are four times more stable and 40 percent thinner. The key cap is 17 percent larger, and the keys are much more precise and accurate, even if you strike them on the side. Each key has its own LED for illumination.

The display panel offers a resolution of 2,304 pixels by 1,440 pixels. The panel is 0.88mm thin which is the thinnest display that Apple has ever used.

Apple has even redesigned the trackpad on the MacBook, doing away with the “diving board” effect of a hinged trackpad. Called the Force Touch trackpad, it is a glass surface with four pressure-sensitive touch sensors and a new “Force Click” gesture. If you Force Click on a phrase, it automatically opens up in Wikipedia. If you Force Click on an address, it automatically opens a map of that location. The trackpad also provides you with taptic feedback. The trackpad’s stiffness is even user controlled, because it is software-configurable.

Inside the new Macbook, you will find:

The batteries are terraced and contoured, so the most interior space possible can be utilized. Schiller quipped, “We don’t want to ship air, we want to ship batteries.” With these state-of-the-art batteries, the Macbook can run all day with up to nine hours of wireless Web use or up to 10 hours of iTunes movie playback.

To reduce the number of connectors on the computer, there is a single USB-C connector that supports power, displays, storage devices, and more.

The new MacBook comes in silver, space gray, and a “stunning” gold.

For environmentally conscious users, Apple noted that the new MacBook has the following environmental features:

The new MacBooks will retail at $1,299 with a 1.1 GHz dual-core Intel Core M processor, Intel HD Graphics 5300, 8GB of memory and a 256 GB SSD storage drive. If you want a faster processor, you can have it with a $1,599 MacBook containing a 1.2 GHz processor and 512GB SSD. The new MacBooks launch on April 10, with preorders beginning today.

Next, Apple is bringing the Force Touch Trackpad to the 13″ MacBook Pro as well as faster processors and memory, plus more battery life. 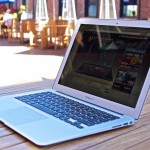