You are using an outdated browser. Please upgrade your browser to improve your experience.
That iThingy You're Wearing
by Bryan M. Wolfe
March 11, 2015

The Apple Watch arrives in stores on Friday, April 24. Should you buy one on launch day? Maybe not, when you consider that new models could be arriving as early as this fall,  according to AppleInsider.

In a research note to investors, KGI Securities’ Ming-Chin Kuo notes that Apple could be prepping three additional casing materials for the Watch. These would arrive ahead of the holiday shopping season.

Kuo didn’t indicate the new materials Apple is prepping. A recent rumor suggested that the company was toying with using platinum on a future Watch model.

Other materials that Apple could introduce include white gold, titanium, or even ceramic. Less common materials include carbon fiber, rubber, or custom creations from fine watchmakers like Rolex’s “Rolesor” and Hublot’s “Magic Gold.”

At launch, the Apple Watch will ship in aluminum, stainless steel, and 18-karat gold.

The most expensive Apple Watch is priced at $17,000. No doubt, platinum and white gold models could cost even more.

Is this the direction Apple should be taking? I’m not so sure. Of course, the market will be the one that ultimately decides.

See also: New Reserve and Pickup system for Apple Watch is in the works, Apple welcomes developers to test their Apple Watch apps, and The Apple Watch contains 8GB of storage and has a replaceable battery. 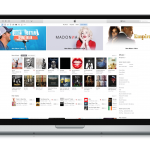 Update: iTunes is down, as is the rest of Apple's digital marketplace
Nothing found :(
Try something else