You are using an outdated browser. Please upgrade your browser to improve your experience.
Pocket Gaming
by Jeff Byrnes
April 8, 2015

Brisbane, Australia-based studio Spunge Games will be releasing its debut game, Cartoon Survivor, in the next few weeks. An adventure runner with a diagonal twist, the game is set in a beautiful, vibrant 3-D world full of lovable dynamic characters. The game will be a free download for iOS devices.

Spunge Games has spun out of award-winning animation studio Liquid Animation. Liquid Animation was established in 1999, and has overseen the creation, development, and production of animated and live action projects for major international entertainment studios like Disney, Warner Brothers, and Mattel. 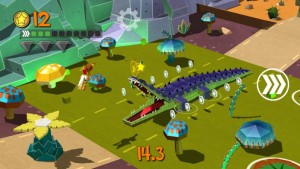 Cartoon Survivor features finely-tuned tilt mechanics, allowing the player to intuitively run, jump, and glide through the levels. In the game world, Cartoon Survivor is the producer’s last chance for a TV mega hit, with ratings at rock bottom. The main character, a dodo bird named Doo Doo, is the only applicant to star in the show, and must maneuver through death defying obstacle courses littered with feisty creatures and deadly prehistoric environments before the dynamite strapped to his back explodes.

Difficulty of each level is determined by how much time the player has to complete the episode. You can set this yourself by choosing the length of the wick on the dynamite. Players collect coins along the way to unlock different costumes and abilities. Cartoon Survivor will include four seasons of six episodes each. The first season is included with the free download, and additional seasons can be unlocked with coins or through in-app purchases. See the video below for gameplay, or click here if the video doesn’t load.