You are using an outdated browser. Please upgrade your browser to improve your experience.
That iThingy You're Wearing
by Jeff Byrnes
April 17, 2015

Beginning April 24, select Apple Stores around the world are offering “Apple Watch Basics” workshops. These workshops will help customers get started with Apple Watch, showing them how to use Glances, gestures, watch faces, and more.

The workshops are not available at all retail locations at this time, but select stores in both the United States and other countries are offering the classes starting on April 24. The courses take place at one hour intervals all day long in most locations, and are also available on Saturdays and Sundays. According to a recent MacRumors report, some locations even appear to be offering extended hours in order to host more workshops. 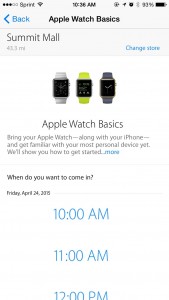 Certain stores are also hosting a “Stay in Touch with Apple Watch” workshop. This class helps you learn how to respond to messages and mail, share your location, take a call, and even send your heartbeat to someone else. 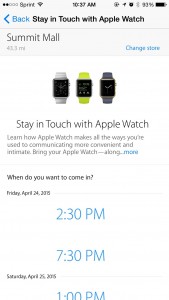 Most customers will not yet have their Apple Watches, but those who have preordered and do not yet have their devices can attend to learn more about the smartwatch. Because of the slow delivery times of the wearable device, Apple recently stopped emphasizing the launch date on its website. References to “available 4.24.15” have been replaced with “the Watch is coming.”

Preorders for Apple Watch began at 12:01 a.m. PDT on April 10, and began selling out very quickly. Within six hours, all models of Apple Watch were sold out and no longer offered the initial April 24 to May 8 shipping estimate. If you order your Apple Watch today, it will not ship until June or later.