You are using an outdated browser. Please upgrade your browser to improve your experience.
iDevices
by Jeff Byrnes
April 23, 2015

It’s been a long time since we’ve seen any new models in the iPod lineup. In fact, there have been no signficant changes to the media players since late 2012. According to a recent AppleInsider report, though, Apple will release at least one new model in the iPod lineup this year.

One of AppleInsider’s sources, familiar with Apple’s future product plans, has pointed to an upcoming refresh of the iPod touch later this year. The source suggests that the new iPod touch will retain the same 4-inch screen size as the current model, but there is still the possibility for the device to take on the larger screen size of the iPhone 6.

Any new models of the iPod touch could also see upgraded storage capabilities. Currently, the media player is available with 16GB, 32GB, and 64GB of storage. The iPhone 6 and iPhone 6 Plus offer a higher-capacity option of 128GB, and that option could very well make its way into the iPod touch lineup.

Next, we would surely see an upgrade to the camera in the iPod touch. Right now, the media player features a 5MP iSight camera capable of 1080p video with image stabilization, and a forward-facing FaceTime camera capable of 720p video. The iPhone 5s that might see parts recycled for use has an 8MP rear-facing camera and a 1.2MP front-facing camera.

It would certainly be nice to see the iPod touch refreshed, since the media player has not been updated since September 2012. However, I’m not so sure we will see such an update, myself. Sales of the iPod touch have been dwindling to the point that Cupertino no longer reports unit sales of the media player. Instead, sales of the iPod touch are lumped in with services and Apple Watch. The last period in which iPod sales were reported, the fourth quarter of fiscal 2014, only 2.6 million units were sold, earning Apple a mere $410 million in revenue. 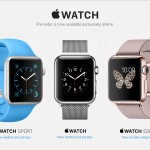 Update: Some Apple Watch orders could arrive earlier than expected

On second thought, there might not be a new 4-inch iPhone this year
Nothing found :(
Try something else