You are using an outdated browser. Please upgrade your browser to improve your experience.
iWallet
by Jeff Byrnes
June 9, 2015

When Apple Pay launches in the U.K. in July, transactions will be limited to £20, according to a recent report from BBC. All of the major U.K. banks, with the exception of Barclays, have announced the adoption of Apple Pay and many retailers are expected to begin accepting the contactless payment method soon.

Apple Pay allows owners of an iPhone 6, iPhone 6 Plus, or Apple Watch to handle their purchase by holding their devices to a contactless pad. Many banks in the U.S. have been supporting Apple Pay since it launched in October 2014, with more joining the ranks monthly. U.S. banks do not impose transaction limits on Apple Pay purchases other than the normal restrictions placed on credit or debit cards.

The limit on contactless debit and credit card payments, due to rise to £30 in September, is believed to be because of fraud on such transactions. That fraud currently accounts for 0.7p for every £100 that is spent, according to the UK Cards Association. Since Apple Pay is thought to offer greater protection against fraud, Visa believes that higher transaction limits might be possible for Cupertino’s payment method. “Not all retailers will have the limit at launch – and there will be others who will choose to get rid of it all together in time,” a Visa spokeswoman told BBC.

The U.K. banks currently offering support for Apple Pay beginning in July include American Express, First Direct, HSBC, Nationwide, NatWest, Royal Bank of Scotland, Santander, and Ulster Bank. Barclays has come under fire for not providing support for Apple Pay, and responded on Twitter that talks are in progress to change that.

Thanks for your tweets this evening. We can assure you that we’ve been talking with Apple about how our customers (1/2)

could use Apple Pay in addition to our existing mobile and payment services, and that these talks remain constructive. (2/2)

We thank reader Richard for bringing this to our attention. 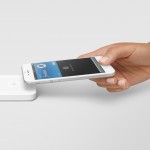 Small businesses can accept Apple Pay with the Square Reader

Apple Pay will be offering even more flexibility this fall
Nothing found :(
Try something else