You are using an outdated browser. Please upgrade your browser to improve your experience.
iDevices
by Jeff Byrnes
June 15, 2015

The keyboard view in iOS 9 has been found to have much better adaptability support than before, rearranging itself to make better use of more space. Developer Steve Troughton Smith has discovered that the on-screen keyboard also adds Tab and Caps Lock keys to the left side and a new top row of symbols. These changes appear to confirm the upcoming 12-inch “iPad Pro.”

The screenshots below show the new keyboard, which appears at larger resolutions than the current 2,048-by–1,536 pixel iPad displays. The Tab and Caps Lock keys have never appeared on an iOS keyboard before, and the top row consists of symbols that are usually typed using specific keystroke combinations.

Rumors of an iPad Pro have been bouncing around for some time, possibly confirmed by a well-informed LG Display official we cited in April. The larger, but currently hidden, keyboard seems to be another bit of proof for the 12-inch iOS device, since it would make sense to offer more keys on the larger screen. The inclusion of the extra keys would also better bridge the gap between the current 9.7-inch iPad Air 2 and the recently launched 12-inch Macbook.

For regular iPad users, iOS 9 still improves upon the virtual typing experience. A new row at the top of the keyboard provides access to functions like cut, copy, past, attachments, and more, as you can see in the image below. Third-party apps can also now register their own keyboard shortcuts, and a there is a two-finger gesture that turns the keyboard into a virtual trackpad. 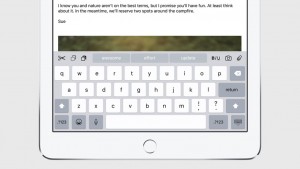 It’s great to see Apple improving on the iOS 9 keyboard. The larger keyboard hinting at an iPad Pro is also a good sign that Apple isn’t done releasing new products for 2015 and might actually be taking on the larger tablet market.

The 10 biggest tech stories this week: Apple Music and the rest from WWDC