You are using an outdated browser. Please upgrade your browser to improve your experience.
That iThingy You're Wearing
by Jeff Byrnes
June 2, 2015

Some people claim that wristwatches have already died, and therefore Apple Watch will be an ultimate failure. Still others claim that traditional wristwatches are still on life support, and that Cupertino’s wearable device will pull the plug. If all you look at is the lower-end watch like those made by Casio and Timex, that might seem to be true. Luxury watch manufacturers such as Rolex and Tag Heuer, on the other hand, are doing quite well and are unfazed by the launch of Apple Watch.

In total, there are around 600 high end wristwatch brands from makers like LVMH Group, Swatch, Rolex, and Richard Mille, to name a few. These timepieces are sold in boutiques and jewelry stores around the world, along with collectible vintage models that sell at auction. Each of these brands is responding to Apple Watch in their own way, but most seem largely unaffected by Cupertino’s foray into timepieces.

Take a look at Tag Heuer, for example. In a partnership with Google and Intel, Tag Heuer’s offering will be powered by Google’s Android Wear and is expected to retail for $1,400 when it comes out in November. Tag Heuer seems to be so unconcerned about truly competing with Apple in this segment, though, that nobody has even seen a prototype of the smartwatch yet.

Other manufacturers are taking a platform-agnostic approach, such as the Frederique Constant and Alpina Horological Smartwatches I covered several months ago. These smartwatches work with either iOS or Android, and are powered by the same fitness tracking technology found in Jawbone, Nike Fuelband, and other wearables.

Finally, let’s check out how Rolex is responding to the smartwatch movement. In short, they aren’t. Rolex, perhaps the first name to come to mind when you hear about luxury wristwatches, has not announced any plans for their own entry into the smart timepiece market. Randy Brandoff, CEO and founder of Eleven James, which rents luxury watches on a subscription-based pricing model, told CNBC, “Those who enjoy getting the latest gadget will get the latest gadget. But it’s not going to replace years of wearing a Rolex. It’s just different.”

What ultimately happens in the smartwatch market remains to be seen, but reviews of Apple Watch have been both favorable and mixed. Some believe that the rise of Apple Watch will make the younger generation more aware of what’s on people’s wrists, rejuvenating even the lower-end timepiece market and ensuring the luxury market maintains or improves its position as the Millennials become the majority members in Swiss watchmakers’ target market. 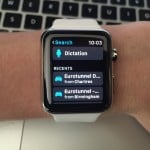 Take Me There for Apple Watch gets directions for your favorite places in fewer taps
Nothing found :(
Try something else