You are using an outdated browser. Please upgrade your browser to improve your experience.
That iThingy You're Wearing
by Jeff Byrnes
July 8, 2015

A research team from the Penn State University is exploring how wearable technology might translate into learning technology. Ben Brautigam, who manages the advanced learning projects at Penn State’s Teaching and Learning with Technology program, is overseeing a program that targets self-regulated learning, according to a report from Government Technology. In short, self-regulated learning means an educational process that allows the student to monitor and control the process through their own knowledge, self-awareness skills, motivation, and strategies.

“The thing with wearables is that these are highly personal devices, even more personal than your smartphone,” Brautigam said “We can take this customized point of view to provide recommendations to students to enrich certain aspects of their learning.”

Rayne Sperling, a self-regulation researcher and associate professor of educational psychology at Penn State, believes Apple Watch and other wearables are powerful tools with the potential to change student behavior and academic achievement. Sperling is leading the research, and hopes to help students track their learning progress while also reminding them to study and presenting course strategies and content via mini quizzes.

Lessons from FitBit and Apple’s HealthKit

Part of the research will involve using Apple Watch to chart data points on a dashboard interface, much like FitBit and Apple’s HealthKit do for personal fitness awareness. Sperling hopes that allowing students to see their progression in learning, like study time and academic achievement, will improve their overall educational experience.

Just like Apple Watch reminds you to stand up and move around, the technology could also be used to remind students when it is time to study or take a break from their schoolwork. Improved study habits lead to better achievement overall, and wearable technology could be a great way to accomplish that.

A work in progress

The strategies Sperling and her team will use are already established and backed by research that prove they facilitate learning, but the exact interface that the group will use is still being developed. Sperling is currently planning what will be the best way to design and conduct the research, as well as determining the most effective learning prompts to help students regulate their studies.

It’s interesting to see Apple Watch already taking hold in education. Apple, of course, has always been involved in educational pursuits, but I am a bit surprised to see wearable technology already being considered for learning purposes. Brautigam hopes that the early research will give educators some advantages if adoption of smartwatches really takes off. “If it does become prevalent, I think we’ll have a leg up here,” Brautigam said, “because we’ve been sort of investing in this and exploring this since the inception.” 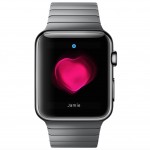 Does the Apple Watch Sport offer users the best display?
Nothing found :(
Try something else