You are using an outdated browser. Please upgrade your browser to improve your experience.
Pocket Gaming
by Jeff Byrnes
August 26, 2015

Who doesn’t love the old school days of anime and arcade games? The popularity of that combination comes together with a great premise and exciting game play. That is one of the reasons stylistic 2D science fiction shooter Galak-Z: The Dimensional has been such a hit and received so much critical acclaim following indie publisher 17-Bit’s release of the title on the PlayStation 4. In 2016, that popular game will blast its way onto your iOS device as Galak-Z: Variant Mobile.

The game casts players in the role of Adam “A-Tak” Takamoto, piloting a spacecraft or mechanized suit through hostile alien territories in a valiant effort to warn the people of earth about an impending invasion. Players will have to collect valuable resources and carefully manage upgrades and weapons, salvaging what they can in order to survive.

Players and critics have embraced GALAK-Z: The Dimensional since its release earlier this month and we have the same high expectations for GALAK-Z: Variant Mobile. GungHo Online Entertainment’s expertise and 17-BIT’s creative vision provided a perfect match for the mobile game, and it’s guaranteed to deliver an entertaining experience for everyone.

According to Jake Kazdal, CEO of 17-Bit, “Galak-Z: Variant Mobile will have all the explosive high-level combat and skill-based action as the original, but tailored and optimized for the mobile player on the go.”

For a sneak peek of what you might be able to expect out of Galak-Z: Variant Mobile, take a look at this trailer from the PlayStation 4 title. If the video doesn’t load, click here. 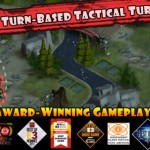 Skulls Of Shogun Brings Fun, Fast-Paced Turn-Based Gaming To iOS
Nothing found :(
Try something else