You are using an outdated browser. Please upgrade your browser to improve your experience.
iDevices
by Jeff Byrnes
August 5, 2015

We suspect that Apple’s manufacturing partners are stepping up production of Force Touch panels for the next-generation iPhone, but what difference will the technology really make for the smartphone? Some people don’t see what benefits, if any, Force Touch would bring to the iPhone, so YouTube user Maximilian Kiener has done a concept video that shows one possible use for the technology.

Kiener’s video shows him using Force Touch to quickly jump to a Settings menu without having to launch the app and navigate to the correct section. Instead of going through all of that, he just hard-presses the Bluetooth or Wi-Fi icon in the Control Center, and the corresponding section of the Settings app comes right up. Watch the video below, or click this link if it fails to load.

“Settings is one of the few domains where Android has usability over iOS. With Force Touch, that’s about to change,” Kiener says. In a conversation with Cult of Mac, he explains how he created the concept video:

I created the prototype like most of my other prototypes in JavaScript, HTML and CSS. I then just open it in Safari and save it to the home screen. Then I can let it run in fullscreen.

We have already been able to see how Force Touch is implemented on Apple Watch and the new MacBook, and this concept video makes a strong case for how it could be used on the iPhone. According to Cult of Mac, KGI Securities’ analyst Ming-Chi Kuo has previously pointed out that Force Touch on the new iPhone will be slightly different from previous implementations, gauging pressure sensitivity instead of duration to activate the feature.

Seeing this video makes the possibility of Force Touch on the iPhone even more exciting, and I hope more ideas will show up for how the technology could improve our smartphone experience. 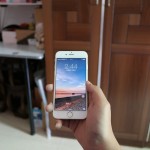 Production ramps up of Force Touch panels for next iPhone