You are using an outdated browser. Please upgrade your browser to improve your experience.
Pocket Gaming
by Jeff Byrnes
September 25, 2015

The port of 2K Games’ BioShock was met with tremendous enthusiasm last year, but those happy thoughts came crashing down when iOS 8.4 was released. The reason for this dismay is that the $15.99 title is so incompatible with iOS 8.4 and later that the app won’t even run. Now, 2K Games has removed BioShock from the App Store completely, meaning you can’t get it back if you delete it. Here’s what makes matters even worse, though: it doesn’t seem you can get a refund for the game if you bought it and now can’t play it.

A handful of users have already tried, according to TouchArcade, and have been rebuffed by both 2K Games and Apple. The customer representatives at 2K Games are saying that it is Apple’s responsibility, but Cupertino is dodging responsibility and saying that this circumstance doesn’t “meet the conditions for a refund.” 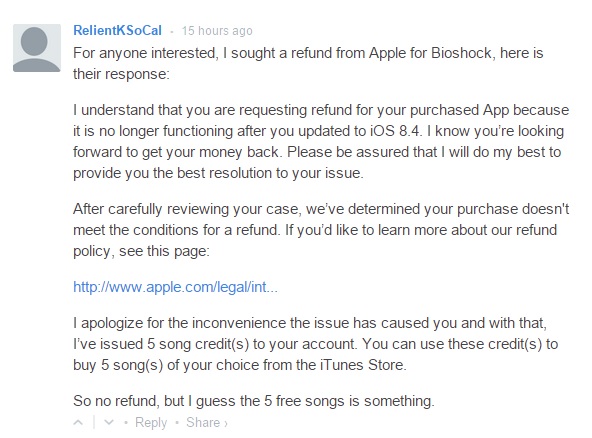 Yes, 2K Games is working to bring BioShock back to iOS, but in the meantime we’ve got customers who spent a fair bit of money on a game they can’t play. Couple that with the fact that nobody is taking responsibility for getting these customers their money back, and it’s a very dire situation that demonstrates the real drawback of an App Store populated with third-party software. The left hand says, “Sure, the right hand can give you back your money.” Then the right hand says it can’t. This kills customer trust, the basis for a successful App Store.

Somebody, either 2K Games or Apple, desperately needs to figure out how to restore customer trust in this case. It’s only natural that problems with compatibility will come up, but this could have been handled in a much better way. 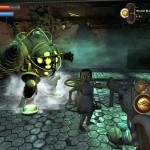 Bioshock for iOS has seemingly been removed from the App Store permanently
Nothing found :(
Try something else