You are using an outdated browser. Please upgrade your browser to improve your experience.
iPhotographer
by Jeff Byrnes
September 11, 2015

One of the coolest new features coming with the iPhone 6s is the Live Photos capability, which captures three seconds of video for every picture you take. Not many details have been released about the new image format, but we do know that it captures both video and audio and is viewable on existing iPhones, iPads, Macs and Apple Watch devices with the latest operating system. Thanks to some digging by Tech Crunch, we also know roughly how much space Live Photos will take on the new iPhones. The information revealed by Tech Crunch also coincides with discussion within the iOS Developer Library of guidelines for displaying and sharing Live Photos.

Thanks to how the technology works, each Live Photo will only take twice the storage space of a normal 12-megapixel image, so it won’t be a huge drain on the storage space of your iPhone. The way it was explained to Tech Crunch, the technology involves saving one 12-megapixel image and then approximately another picture of the same size with the “sidecar” data, or the differences in the photograph on either 1.5-second side of the shot you choose to capture.

The reason the iPhone can do this is pretty nifty. Currently, when you take a picture, you’re actually saving the last image of a buffer of data that your iPhone has been capturing since you launched the Camera app. The only difference with Live Photos is that instead of ditching that extra data, it’s being incorporated into a special format based on JPEG that allows the device to present you with three seconds of live motion and sound within your image. Amazingly, this file format will read as a normal image file on devices that don’t support Live Photo.

This is an awesome feature for anybody with children or pets, who know the constant challenge of trying to capture that most heart-warming or funniest moment when your little one does something adorable. You can almost never get just the right shot, but Live Photo will help you capture the moment like never before. As more developers adopt the open technology, it will be amazing to see what sort of moments people are able to capture and share with the world. 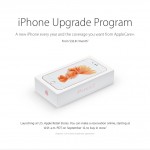