You are using an outdated browser. Please upgrade your browser to improve your experience.
iDevices
by Jeff Byrnes
September 10, 2015

One detail that was missing from Apple’s announcement of the iPad Pro’s specifications was the amount of system memory the new tablet would have. This is important information for anybody tempted by the multitasking capabilities of the iPad Pro, because many users believe that the less memory your tablet has, the less smoothly it can run multiple apps simultaneously. A recent press release from Adobe announcing the release of Photoshop Fix temporarily let the cat out of the bag.

Apple has never been particularly generous about the amount of RAM they install in iOS devices, and they would probably argue that the amount of system memory isn’t so important when the hardware and software are so deeply integrated with each other. This seems to generally be the case, since the iPhone consistently performs well even with its limited system memory, whereas other devices are designed with more memory to achieve similar results.

What really interests me, though, is the fact that Adobe released the information and then pulled it. It is obvious that Apple is calling the shots here, even dictating what the Creative Suite developer can and can’t discuss. It’s a common misconception held by many people I’ve talked to that the more RAM a computer (or tablet) has, the better in all cases. However, the performance of the iPad Pro in the demonstrations appears to be much better than the Microsoft Surface Pro model with double the memory. We’ll have to wait for the official benchmarks to know for certain, though.

Some highs and lows from today’s 'Hey Siri' Apple event 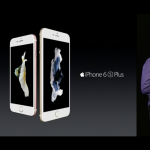 Apple officially unveils the iPhone 6s and iPhone 6s Plus
Nothing found :(
Try something else