You are using an outdated browser. Please upgrade your browser to improve your experience.
Pocket Gaming
by Jeff Byrnes
November 23, 2015

Futurama had a long run, but some might say it wasn’t long enough. For fans still mourning the show’s passing, there’s hope for its resurrection in the form of a mobile game. As reported by Engadget, 20th Century Fox has signed a deal with Wooga, a German game developer, to create the title Futurama: Release the Drones. In the game, players will join the Planet Express crew challenging MomCo in a delivery war. This game will challenge players to connect groups of drones to solve puzzles and make the fastest deliveries.

Wooga is bringing in some heavy hitters to develop the game. Dave Grossman, developer of The Secret of Monkey Island, Sam & Max, as well as Tales of Monkey Island, will be teaming up with former Futurama producer Patric Verrone to bring the game to life. Verrone was co-executive producer in the last years of Futurama’s run, and wrote episodes like “The Problem with Popplers” and “That’s Lobstertainment!”

Neither Wooga nor 20th Century Fox have provided a release date for the game yet, but it’s in active development so it shouldn’t be long before the title hits the App Store. It definitely isn’t the first animated television show to come to mobile devices, instead joining the ranks of The Simpsons: Tapped Out and Family Guy: The Quest for Stuff. Hopefully it will be as well done as those titles. 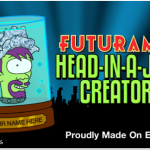 Live Into The Future By Putting Your Head In A Jar
Nothing found :(
Try something else