You are using an outdated browser. Please upgrade your browser to improve your experience.
iOS Reading
by Jeff Byrnes
January 4, 2016

Julian Fellowes, the creator of “Downton Abbey,” isn’t going to be resting on his laurels after the end of the hit television series. Up next for the author, who has written screenplays, musical books, as well as television shows, is a new concept in digital publishing, a serialized novel called “Belgravia.”

The novel will come in eleven installments, each of which will be released weekly by way of an app. The “Belgravia” app will launch in April via the project’s official website, which contains an introductory video and way to subscribe to an email list about the novel’s progress. The printed book will be published in June, but the digital packages will contain bonus content like videos and other features hidden within each episode.

The first installment of “Belgravia” will be free to download. After that, you can subscribe to the full 11-episode weekly serial for $13.99, or buy individual episodes for $1.99 each. The episodes will be automatically delivered to your iOS device the moment they are released each Friday.

According to Fellowes, “Belgravia is where up-to-the-minute technology meets with the age-old art of storytelling.” Charles Dickens was famous for releasing his own Victorian-era novels in serials, and Fellowes is following in those footsteps.

Curious what “Belgravia” might be about? According to the project’s Web page, the novel is “the story of a secret. A secret that unravels behind the porticoed doors of London’s grandest postcode.”

Set in the 1840s when the upper echelons of society began to rub shoulders with the emerging industrial nouveau riche, Belgravia is peopled by a rich cast of characters. But the story begins on the eve of the Battle of Waterloo in 1815. At the Duchess of Richmond’s now legendary ball, one family’s life will change for ever …

To find out more, visit the project’s Web page or watch the introductory video below. If the video fails to load, just click here. 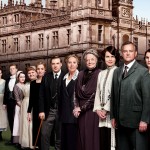 Protect the Crawley family jewels in Downton Abbey: Mysteries of the Manor 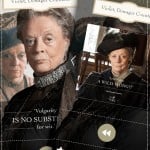 Downtonisms lets you enjoy and share memorable lines from 'Downton Abbey'
Nothing found :(
Try something else