You are using an outdated browser. Please upgrade your browser to improve your experience.
Connected Theater
by Jeff Byrnes
February 12, 2016

It’s been bandied around for months that Cupertino was in talks with major networks to build out its own streaming television service for the Apple TV. According to the latest CNN Money interview with CBS CEO Les Moonves, those talks remain stalled, several months after we first reported the hiatus in December 2015.

Moonves says the talks have stopped, at least for the time being. “We had conversations awhile back, and we haven’t had recent conversations with them,” he told CNN Money. That’s all Moonves would really say about Apple’s plans to enter the market in 2016 with its own streaming TV service. When pressed on the matter, the CEO would only say, “You’ll have to ask Apple that. I don’t know that.”

Granted, Moonves’ comments don’t necessarily mean that Apple has stopped its talks altogether. Cupertino has been looking to acquire exclusive content, and the company could still be in talks with other networks. However, as The Verge points out, CBS is the most-watched network in the United States, so it’s definitely a company Apple needs to be in touch with if it’s going to offer its own “skinny bundle.”

To be honest, I’m beginning to doubt that an Apple-branded streaming television service will ever come to fruition. The idea of it runs contrary to something Apple CEO famously said when the fourth-generation set-top box was announced: “We believe the future of television is apps.” I believe Cupertino will continue trying to get various networks to offer standalone apps for the Apple TV, rather than building its own alternative to cable television. 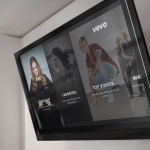 Stream all your favorite music videos with Vevo on Apple TV
Nothing found :(
Try something else