You are using an outdated browser. Please upgrade your browser to improve your experience.
Pocket Gaming
by Jeff Byrnes
February 2, 2016

A hit PC and console title from 2011, The Binding of Isaac, is currently in development for a remake and expansion. What’s really interesting, though, is that the developer for this new title, The Binding of Isaac: Rebirth, is teasing us with ports of that game for iOS devices like the iPad and iPhone.

One of the developers, Edmund McMillen, posted a FAQ for Rebirth more than two years ago, confirming it for release on PlayStation 4, Vita, and Steam, but that’s not all. McMillen noted that “we miiiiight also test the game out on ipad and see how it works, if it works ok then we will also release there.”

Fast-forward to the present, and we have even more indications that an iOS version of The Binding of Isaac: Rebirth could be brewing. Tyrone Rodriguez, founder of game developer Nicalis and producer of The Binding of Isaac: Rebirth, tweeted a short video showing him playing the game on an iPhone 5s with a Bluetooth controller. The controller looks exactly like the SteelSeries Nimbus, so I would guess that this video is fairly recent.

Other tweets from Rodriguez show that he’s working with Bluetooth controller support on iOS for something, and is asking for advice on dealing with lag issues. It’s definitely an interesting development.

If you’re a fan of demon children and bodily humor, The Binding of Isaac: Rebirth could be your next favorite iOS game. Let’s hope that Rodriguez isn’t just messing with us, and the game truly will arrive on the iPhone in the near future. Who knows, maybe it’ll even come to the Apple TV. Check out the trailer of the game below, or click here if it fails to load. 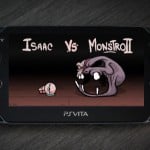 The Binding Of Isaac: Rebirth Could Be A Perfect Fit For Apple's iPad
Nothing found :(
Try something else