You are using an outdated browser. Please upgrade your browser to improve your experience.
App Bargain Bin
by Tyler Tschida
February 11, 2016

Combine numbers to achieve a goal, customize the sky, and get Forever Lost with today’s collection of apps and games.

Play as a former USAF pilot that’s called upon to deliver certain illicit goods for the criminal underworld. You’re able to control your helicopter’s direction and height using separate on-screen joysticks. Fly around the huge randomly generate maps and land to pick up cargo, which you can sell to upgrade your helicopter. The game includes two locations, 50 islands, AirPlay support, the ability to use your iPhone as a controller, and achievements via Game Center.

Pilot’s Path is available for free for a limited time. It has a 4-star rating with a total of 673 ratings.

System Monitor is one of the most comprehensive and accurate apps in the genre. You’re able to switch between views via tabs at the bottom of the screen. You’re also able to get a more detailed look at your memory and battery usage with a double-tap. The app also includes other detailed information like your IP address, MAC address, UDID, last boot time, and iOS version.

System Monitor – Battery Health, Free Memory, Used Space. is available for free for a limited time. It has a 4.5-star rating with a total of 656 ratings.

Alien Sky – Space Camera ($2.99 → Free, 76.0 MB): Customize the sky in your photos with Alien Sky. It’s a great way to add a futuristic look to your favorite outdoor photos.

Like every other BrainFeverMedia photography app, Alien Sky is loaded with effects. Only these effects focus on cosmic objects. You’re able to utilize any photo in your library or grab a pre-built scene from the app. Each effect acts as a separate layer, allowing you to customize them in a variety of ways. Alien Sky includes loads of filters, textures, and lens flares as well.

Alien Sky – Space Camera is available for free for a limited time. It has a 4.5-star rating with a total of 89 ratings.

Piece together the puzzle of your life by following the clues scattered around the 3-D environments. Collect items, scribble notes, and snap photos to work your way out of the haunted nightmare. The game also includes an eerie soundtrack, and a full hint guide so you’ll never be stuck for too long.

Forever Lost: Episode 1 HD is available for free for a limited time. It has a 4.5-star rating with a total of 806 ratings.

The Mesh is one of the more innovative puzzle games you’ll play this year. The object of the game is to move numbered tiles around the screen in order to achieve a target number. Tiles of the same color will add to each other while opposite colors will subtract. Simply double-tap on a tile to change its color. If you have a tile left within The Mesh without achieving the target number, you’ll lose the number of cells indicated on the tile, which makes it more and more difficult to combine them. Keep combing until you can’t combine anymore.

The Mesh is available for free for a limited time. It has a 4-star rating with a total of 42 ratings. 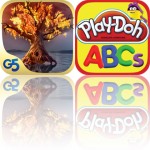 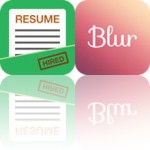