You are using an outdated browser. Please upgrade your browser to improve your experience.
Connected Fitness
by Jeff Byrnes
February 8, 2016

How often do you think about the privacy and security of your wearable device, particularly when it comes to your fitness data? According to a recent study by Open Effect, you might want to think about it more. The research, carried out with contributions from the Citizen Lab at the Munk School of Global Affairs, University of Toronto, found that many fitness wearables have security vulnerabilities that put your data at risk. Out of the devices tested, only the Apple Watch proved to be secure, according to the researchers’ findings.

The researchers evaluated seven fitness tracking devices, in addition to Apple Watch. Devices from Jawbone, Withings, Fitbit, Garmin, Intel, and Mio were included in the study, with all but Apple Watch posing vulnerabilities that could expose wearers to long-term tracking of their location when the accessories were not paired and connected to a handset or tablet.

On top of that vulnerability, the researchers found that applications by Jawbone and Withings could be exploited to create fake fitness band records. Since this information can be used in court cases and insurance programs, the findings are very troubling indeed. Garmin Connect also exposes fitness information to surveillance and tampering, because the app doesn’t employ basic data transmission security.

The researchers attempted to engage seven of the manufacturers in dialogue, only leaving Apple out of the loop. According to the study, Cupertino was not contacted because “researchers found no technical vulnerabilities in the Apple Watch using their methodology.” Fitbit, Intel, and Mio responded to and engaged with the researchers, and Fitbit even expressed an interest in working alongside the team to improve Bluetooth security on their devices.

If you take your personal privacy seriously when it comes to your fitness data, this research should make you pause and rethink what fitness tracking device you choose to wear. While Apple Watch obviously isn’t for everyone, someone who wants to be completely safe from tracking or having their fitness data tampered with would clearly be better off with Cupertino’s wearable device instead of the competing products. 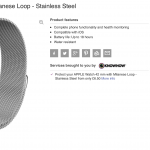 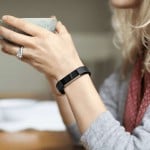 Track your activity and get notifications with Fitbit Alta
Nothing found :(
Try something else