You are using an outdated browser. Please upgrade your browser to improve your experience.
App Bargain Bin
by Tyler Tschida
October 15, 2016

Guide a noble circle through a two-dimensional world, send a message with typography, and save the solar system with today’s collection of apps and games.

Modern Labyrinth is casual gaming at its best. It doesn’t have a ton of bells and whistles. Just launch the game and get rolling. As with all labyrinth games, your job is to avoid falling down the wrong hole on your way to the highlighted one by tilting your iDevice. Try to move quickly and achieve the best time possible. The game includes 36 levels.

Modern Labyrinth is available for free for a limited time. It has a 4.5-star rating with a total of 47 ratings.

Your child is able to explore the sea by tapping and dragging Tiggly and his submarine around. When they come across a character, they can latch on to an anchor point and start creating short words. There’s no wrong way to play. Just explore and create.

Tiggly Submarine: Preschool ABC Game is available for free for a limited time. It has a 4.5-star rating with a total of 40 ratings.

Tiggly Story Maker: Make Words and Capture Your Stories About Them ($2.99 → Free, 190.0 MB): Build a world powered by your imagination with Tiggly Story Maker. It’s for children ages five and under.

Your child is presented with two consonants that sit at the bottom of the screen with a space in the middle. They get to pick any vowel they wish from the top of the screen to create a word. If the word is valid, an object, person, or animal will appear. If it’s invalid, it will be ejected from the screen. When they’re done generating words, they can use any or all of them to create an animated story.

Tiggly Story Maker: Make Words and Capture Your Stories About Them is available for free for a limited time. It has a 4.5-star rating with a total of 36 ratings.

Blurify – Create custom blurred iOS 7 style background wallpapers ($1.99 → Free, 5.5 MB): Turn your everyday photos into colorful blurred images with Blurify. It’s designed for anyone who wants to use their own photos as wallpapers.

Blurify is remarkably easy to use yet its results are unmatched. Pick a photo from your library or take a new one from within the app. Then tug at the sliders that are popping out from the right side of the screen to adjust the blur, saturation, color, and contrast levels. Not really sure what you’re trying to achieve? Don’t worry, just give your iDevice a shake and have Blurify randomize the sliders.

Blurify – Create custom blurred iOS 7 style background wallpapers is available for free for a limited time. It has a 4-star rating with a total of 17 ratings.

A Noble Circle ($0.99 → Free, 57.7 MB): Guide a noble circle through a two dimensional world in A Noble Circle. It’s one of those games that just has to be experienced.

A Noble Circle is from the creator of A Dark Room and The Ensign. If you’ve played those games, you’ll have a better idea of what to expect from A Noble Circle. If not, you have to try it anyway. On the surface it’s a high score game that has you moving a circle higher and higher with taps. But as you progress, a rather unique story will unfold right before your eyes.

A Noble Circle is available for free for a limited time. It has a 5-star rating with a total of 1708 ratings.

TypiMage makes it fun and easy to create beautiful text designs. The app contains a collection of stock images that you can utilize or you can import your own. You’re able to create your message using as much text as you like. Then tap on a style and watch the magic happen. Every tap results in a new typographic design, so if it’s not something that fits your mold, just keep tapping. The app includes 62 different styles, endless randomizations for each style, text effects, filters, and the ability to add your own watermark.

TypiMage – Typography Editor is available for free for a limited time. It has a 4.5-star rating with a total of 198 ratings.

A galactic syndicate has invaded our solar system. It’s up to you and your squadron to fight them off using all of the weapons at your disposal. The 35 missions will take you from the clouds of Jupiter through the Rings of Saturn. Earn medals and credits for defending key targets in order to build up your squadron and unlock new weaponry.

The Last Squadron – Battle for the Solar System is available for free for a limited time. It has a 4-star rating with a total of 17 ratings.

Tiggly Story Maker: Make Words and Capture Your Stories About Them
Tiggly
Free

The Last Squadron - Battle for the Solar System
Banzai Labs 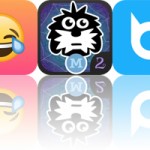 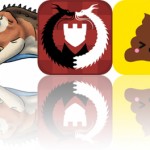