You are using an outdated browser. Please upgrade your browser to improve your experience.
App Bargain Bin
by Tyler Tschida
December 14, 2016

Play as a Rat On A Snowboard, get control over your inbox, and improve the sound of your favorite songs and albums with today’s collection of apps and games.

MailTime Pro-Yahoo Mail,Outlook,Gmail Messenger ($2.99 → Free, 54.2 MB): Get control over your inbox with MailTime. It’s for anyone interested in improving the way they manage and respond to emails.

MailTime reimagines the way you deal with email. It grabs your email threads and turns them into bubble chats, allowing you to cut through the clutter and communicate more efficiently. If you want to view the original email, just tap the bubble. MailTime’s smart inbox system also learns from your email behavior, automatically sorting email from accounts you’ve already interacted with into a separate tab, helping you quickly find the threads that matter. The app also includes a bunch of other handy features like the ability to quickly create and assign to-dos using the “@” symbol, warnings for messages that ramble on, and quick access buttons to cloud services.

MailTime Pro-Yahoo Mail,Outlook,Gmail Messenger is available for free for a limited time. It has a 4-star rating with a total of 134 ratings.

SomaFM doesn’t require any registration or additional purchases. Just launch the app, pick a station, and enjoy! Stations can be filtered by popularity or genre, and they can be marked as favorites for quick access. SomaFM offers high and low bandwidth streaming to help avoid data overages. It also includes background streaming support, the ability to share what you’re listening to, and Apple TV and AirPlay support.

SomaFM Radio Player is available for free for a limited time. It has a 4.5-star rating with a total of 291 ratings.

You won’t be able to resist the charm of this jigsaw puzzle game. Each of the 36 jigsaw puzzles features an adorable kitten photo to reconstruct. The jigsaw puzzles can be broken up into as few as four pieces and as many as 24. You’re also able to choose whether or not you want a colored background and outline hints. What more could you ask for?

Jigsaw Wonder Kittens Puzzles for Kids is available for free for a limited time. It has a 5-star rating with a total of 7 ratings.

Rat On A Snowboard ($1.99 → Free, 15.3 MB): Ratty takes on another extreme sport in this arcade game from Donut Games. It’s for fans of one-tap gameplay.

Rat On A Snowboard includes three game modes, two of which are endless distance games. In all three modes you’re required to jump over obstacles, perform tricks, and collect stars and cheese to achieve the highest possible score. The game also includes achievements and leaderboards via Game Center.

Rat On A Snowboard is available for free for a limited time. It has a 4.5-star rating with a total of 25898 ratings.

Magic Launcher Pro – Launch anything Instantly ($2.99 → Free, 81.9 MB): Launch apps and actions from your lock screen with Magic Launcher. It’ll change the way you use your iDevice.

Magic Launcher has the ability to launch over 100,000 different apps and actions right from your lock screen. Upon launch it’ll need to determine which apps are supported. After it has finished you’ll able to add quick access icons for your favorite apps, contacts, settings, and services to your lock screen. The app also includes 3D Touch support.

Magic Launcher Pro – Launch anything Instantly is available for free for a limited time. It has a 4.5-star rating with a total of 109 ratings.

Equalizer PRO – volume booster and sound effects ($2.99 → Free, 41.7 MB): Improve the sound of your favorite songs and albums with Equalizer Pro. It’s perfect for anyone who wants more control over the way their music sounds.

We really like Equalizer Pro because it’s so easy to get great results. If you like to fiddle around with your sound, you can manually adjust the equalizer bars. If you just want to hear your music in its best possible form, choose from the 23 professional effects. While your music is playing you can activate one of the 10 visualizers and watch as they react in real-time. The app also includes the ability to adjust the equalizer quality and output gain. Equalizer Pro is able to tap into your SoundCloud and Spotify accounts as well.

Equalizer PRO – volume booster and sound effects is available for free for a limited time. It has a 4-star rating with a total of 705 ratings. 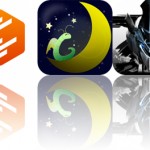 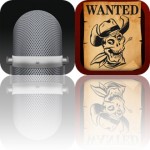