You are using an outdated browser. Please upgrade your browser to improve your experience.
App Bargain Bin
by Tyler Tschida
September 1, 2017

Compete with sketches, conquer an astonishing amount of enemies, try to capture stars with a bouncing ball, beautifully showcase an event of motion, and secure your Web travels with today’s collection of apps and games.

FrameLapse – Instant Moving Pictures ($0.99 → Free, 30.4 MB): Turn every moment of your life into a video with FrameLapse. Social photographers.

FrameLapse allows you to capture new content from within the app, or you can import your own images or videos. You’re then able to change the playback order, apply filters, adjust the brightness and contrast, change the playback speed, add text and stickers, and attach a soundtrack. When you’re finished, simply export your new video as a GIF or MP4.

FrameLapse – Instant Moving Pictures is available for free for a limited time. It has a 4-star rating with a total of 32 ratings.

Take the role of a great warrior and try to survive against waves of enemies. You may be a ninja wielding a katana or perhaps a combo as strange as a Viking firing rockets.Some things you’ll choose, others you’ll just be thankful for. No matter what, it’ll be a time of adrenaline-filled fights you’ll never forgot.

WinKings is available for free for a limited time. It has a -star rating with a total of ratings.

SnowHaze provides several mechanisms to prevent others from snooping on your transmitted data and logging everything you do online. You can choose to inhibit certain scripts, including tracking and popover and pop-ups, restrict media playback, requiring your permission to start inline videos, etc. receive warnings about known offending sites, force the use of secure connections, and even prohibit origin tracing, i.e. a VPN. Some features, such as the VPN, are only available if you maintain a subscription to SnowHaze’s premium service.

SnowHaze Private Browser is available for free for a limited time. It has a 4.5-star rating with a total of 5 ratings.

Little Luca ($2.99 → Free, 26.5 MB): Collect all of the stars by launching the ball from various surfaces. Those who enjoy charming stories and causal strategic challenges.

Help Luca gather up the stars by bouncing the ball from wavy-jiggly hills, squish-able moons, and more. Collide with as many stars as you can, all three per level is best, before launching the ball into the dark, mysterious portal. It’s a crazy quest spanning three realms and nearly 100 stages, depicted in comic book-style art.

Little Luca is available for free for a limited time. It has a 4.5-star rating with a total of 31 ratings.

Samurai Duel ($2.99 → Free, 19.3 MB): Fight with your friends for honor in this intense multiplayer game. Anyone who has a friend to duel with locally.

Pick a side of the screen and prepare for a duel to the death. A square box below your samurai will fill up with a symbol. The first player to correctly trace the symbol will land a blow to their opponent. You must land three blows to claim victory. The game includes a total of five symbols, or weapons, to master.

Samurai Duel is available for free for a limited time. It has a 4.5-star rating with a total of 27 ratings. 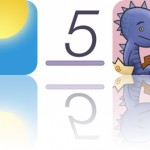 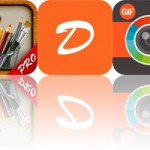