You are using an outdated browser. Please upgrade your browser to improve your experience.
App Bargain Bin
by Tyler Tschida
May 31, 2018

Judge your friends with a game of cards, break a secret code, and make photos look more realistic with today’s collection of apps and games.

This is the type of game that will kick start your brain and get those juices flowing in the morning. You’re provided with 10 attempts to guess the secret four-digit code. After each attempt you’ll receive a hint. Use the hints to progressively work your way to the correct code. The game includes single and hot-seat multiplayer modes, and online leaderboards.

Smash the Code is available for free for a limited time. It has a 4.5-star rating with a total of 83 ratings.

You’re able to import any photo from your library or take a new one from within the app. Then allow Orasis to automatically enhance your photo, or you can tweak the settings to get the exact look you want. In the end, your retouched photos should look closer to what your eyes perceived when you took them. The app includes 14 presets and the ability to share your correct photos via email, Facebook, or Twitter.

OrasisHD is available for free for a limited time. It has a 4.5-star rating with a total of 305 ratings.

Honey Stickers allows you to show your affection in a wide variety of ways. It includes 80 stickers in total, allowing you to add things like sweetie, bright eyes, amore, stud muffin, and more to your conversations. Just peel and stick.

Honey Stickers is available for free for a limited time. It has a 4.5-star rating with a total of 6 ratings.

Accusation Nation will help bring the crew together or break the ice in a room full of new people. The idea is to gather at least four people around your iDevice and take turns being the judge. The judge draws a card and reads it aloud, and each player gets a chance to explain why they don’t deserve to be associated with the card. The judge makes the ruling and a player will be awarded a negative point. The first player to the target number is the loser. There are no winners in this mode. However, there is an Ice Breaker mode for groups that don’t know each other well, and in this case you lobby for cards and earn positive points to win.

Accusation Nation-A Party Game is available for free for a limited time. It has a 4.5-star rating with a total of 11 ratings. 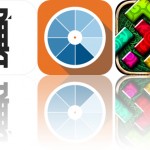 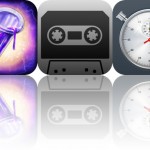 Today’s Apps Gone Free: The Secret of Chimera Labs, Tape and Stopwatch
Nothing found :(
Try something else