You are using an outdated browser. Please upgrade your browser to improve your experience.
App Bargain Bin
by Tyler Tschida
July 8, 2018

Rescue the Enchanter, throw sick tricks, and zero out the game board with today’s collection of games.

In True Skate, your fingers act as your feet. The flick controls work exactly as you would expect them to, allowing you to pump, ollie, flip, and grind with little effort. The tutorial at the beginning of the game will walk you through the basics to ensure you get the hang of things before taking on missions. The game includes realistic physics, the ability to challenge other players, replays, slow motion, and the ability to unlock loads of additional content.

True Skate is available for free for a limited time. It has a 4-star rating with a total of 12279 ratings.

Rescue the Enchanter is a continuation of The Enchanted Books adventure series. With the final book collected, the last piece of the puzzle is to recover the enchanter himself. To achieve your goal you’ll have to choose the correct paths, pickup clues, and solve puzzles. A built-in hint system will assist you when you’re stuck, and a dynamic map will ensure you won’t simply go running around in circles.

Rescue the Enchanter is available for free for a limited time. It has a 4.5-star rating with a total of 156 ratings.

The basic gameplay mechanics in Zero are simple enough. You must slide positive and negative numbered tiles around the board in order to achieve zero. The first few levels consist of just ones and twos, but things get crazy pretty quickly when large numbers and new kinds of modifier tiles enter the mix. Also, keep in mind that tiles won’t stop sliding unless they run into something. The game includes a total of 120 levels.

Zero+ is available for free for a limited time. It has a 5-star rating with a total of 83 ratings. 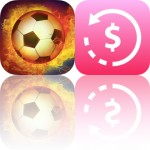 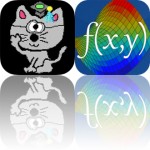