You are using an outdated browser. Please upgrade your browser to improve your experience.
App Bargain Bin
by Tyler Tschida
January 12, 2019

Fly the unfriendly skies, manage media, and claim squares to best your opponent with today’s collection of apps and games.

Jump into a WWI aircraft and take to the skies to complete challenging missions. You’re able to control your plane’s ascent and descent via two arrow buttons in the bottom left corner of the screen. The plane’s machine gun and bomb controls are located on the right. Take out air and ground forces and complete missions to earn medals and unlock new planes. The game includes a single player campaign, online multiplayer, and achievements and leaderboards via Game Center.

Sky Aces is available for free for a limited time. It has a 4.5-star rating with a total of 167 ratings.

You Against Me will help scratch that competitive itch. It’s a head-to-head turn-based board game that has trying to claim more squares than your opponent by playing numbered cards. Each covered number on the board earns you one point. After a card is played, you’re able to replenish your hand by taking a card from either player’s draw pile since each card has two sides. To lock a number on the board, simply cover the numbers directly above and below or to the sides of the number. The game includes a full tutorial, two AI opponents, pass and play multiplayer, and online multiplayer.

You Against Me is available for free for a limited time. It has a 4.5-star rating with a total of 71 ratings.

Ratio Rumble is an educational math game about equivalent ratios, and it will help drive home Common Core topics. Your child or student is able to pick from 18 different characters and head into battle. During each turn they’ll be required to recreate recipes by connecting ingredients in order to deal damage, defend against attacks, and refill their health bar. As the game progresses, new elements will be added along with the ability to unleash power-ups.

Ratio Rumble is available for free for a limited time. It has a 4.5-star rating with a total of 18 ratings.

Pixave is a mobile version of the developer’s Mac app by the same name. It aims to bring the same convenient media management tools to your iPad. You’re able to import media in a variety of ways including by simply dragging and dropping it into the app or capturing it from websites. Pixave supports tons of popular file types including GIF, JPEG, TIFF, PSD, PDF, RAW, MOV, M4V, and MP4. Pixave utilizes machine learning to automatically create and add tags based on the detected contents of media. The app also supports multiple libraries and iCloud syncing.

Pixave is available for free for a limited time. It has a 3.5-star rating with a total of 19 ratings. 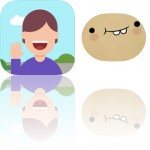 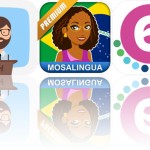