You are using an outdated browser. Please upgrade your browser to improve your experience.
App Bargain Bin
by Tyler Tschida
February 26, 2019

Turn any iPhone into a personal photo booth, set off on a galactic adventure, and break the code with today’s collection of apps and games.

4tomatic turns your iPhone into a personal photo booth. Position yourself within the viewfinder and tap the shutter button. The app will begin to take four photos in succession while allowing for a little time in between to change your expression. A signal light above the viewfinder will warn you when the next shot is about to happen. After the four photos have been taken, they’re automatically stitched together into a strip. You can then apply different filters and frame colors before sharing.

4tomatic is available for free for a limited time. It has a 4.5-star rating with a total of 7 ratings.

Coin Wars allows you to compete against players from all over the world in coin flipping battles for real prizes. In the game’s head-to-head mode, heads always wins. In the case of a tie, the coins will go into a pot and you’ll flip for the pot. In the game’s three, four, and five-player modes, you’ll want to be the odd player out. Weekly contests allow you to play for real cash prizes.

Coin Wars | Win Real Stuff is available for free for a limited time. It has a 3.5-star rating with a total of 28 ratings.

Out There Chronicles is an interactive game book based on the acclaimed space exploration game, Out There; but you don’t have to have experienced the original to enjoy this adventure. After having been kept in cryostasis for a very long time, you find yourself on a planet colonized by humans who have fled Earth. It’s up to you to develop relationships, learn the language of alien races and discover their cultures, and make decisions that change your fate. The game includes beautiful illustrations by Benjamin Carré, captivating music, and an original story by FibreTigre.

Out There Chronicles – Ep. 1 is available for free for a limited time. It has a 4-star rating with a total of 133 ratings.

This is the type of game that will kick start your brain and get those juices flowing in the morning. You’re provided with 10 attempts to guess the secret four-digit code. After each attempt you’ll receive a hint. Use the hints to progressively work your way to the correct code. The game includes single and hot-seat multiplayer modes, and online leaderboards.

Smash the Code is available for free for a limited time. It has a 4.5-star rating with a total of 97 ratings. 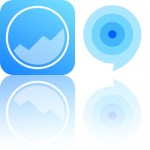 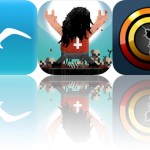