You are using an outdated browser. Please upgrade your browser to improve your experience.
Apple In Court
by Bryan M. Wolfe
October 31, 2017

The long-running Apple-Qualcomm chip partnership could be doomed as we head into next year, according to The Wall Street Journal.

Apple and Qualcomm are likely to part ways when next year’s iPhones and iPads launch. This decision comes nearly a year after Cupertino accused Qualcomm of using its market dominance unfairly to block competitors and to charge exorbitant patent royalties.

For next year’s iOS devices, Apple’s likely to turn to modern chips from Intel and possibly MediaTek. These chips handle the communications between wireless devices and cellular networks. Qualcomm remains the biggest supplier of such chips for the current wireless standard.

Apple once only used Qualcomm chips for its iPhone lineup. In 2016, however, Intel got part of the business for the iPhone 7 and iPhone 7 Plus. The split arrangement continued with this year’s iPhone 8 and iPhone 8 Plus.

Replacing Qualcomm with Intel and MediaTek comes with some risks:

Jettisoning Qualcomm chips would create risks for Apple. Semiconductor analysts widely consider modem chips from Intel and MediaTek, a smaller chip designer based in Taiwan, to lag Qualcomm in performance in areas such as download speeds. For example, Qualcomm has shipped a chip in phones that can process 1 gigabit of data per second, while Intel and MediaTek haven’t demonstrated modem chips that fast, said Patrick Moorhead, principal analyst at technology research firm Moor Insights & Strategy.

An Apple-Qualcomm divorce hasn’t been finalized and could still be scrapped, according to people familiar with Apple’s manufacturing process. In fact, Cupertino could still change modem-chip suppliers as late as next June for the 2018 iPhone lineup. In other words, stay tuned. 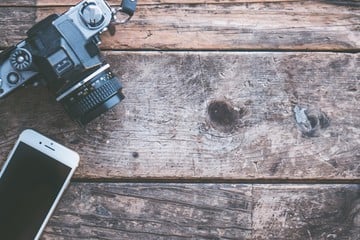 With Photo Editor - Picture Effects, You Have a Host of Filters and Blur Effects at Your Fingertips