You are using an outdated browser. Please upgrade your browser to improve your experience.
by Christine Chan
March 27, 2018

Paste 2 (Free) by Dmitry Obukhov is a smart clipboard and snippet manager for your iOS device. If you've been looking for a replacement for the defunct Pastebot, then you should consider Paste 2. It's similar to the also excellent Copied.

I'm constantly on my iPhone, Mac, or iPad mini 4 (to a much lesser extent). While I'm using my devices, I'm always copying various bits of text or images to send someone, paste into an article I'm working on, or just reference later. Back in the day, I remember Pastebot as being the clipboard app to have on iOS. Unfortunately, Tapbots didn't keep it around after a while, as they decided to focus solely on Tweetbot and Calcbot. Fortunately, this meant it was possible for other clipboard managers to rise in the ranks, and Copied was one of them. I've been using Copied to get data on my iPhone and Mac, while also using Alfred's built-in clipboard to keep track of stuff for work. While I was familiar with Paste on Mac, it didn't win me over since it was Mac only. That is, until now. 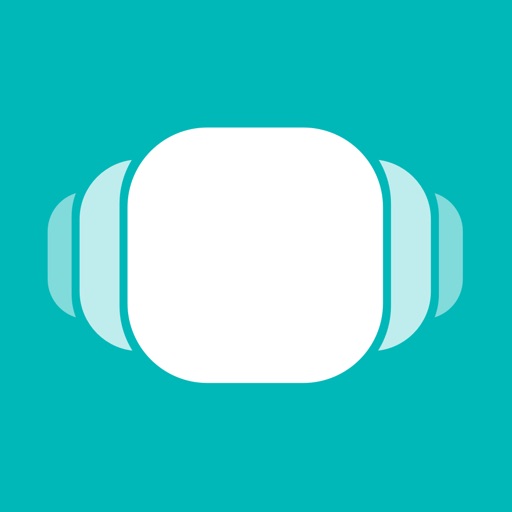 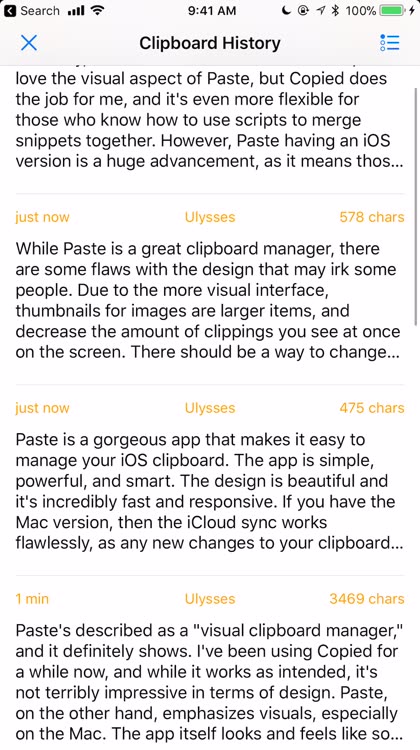 Paste's described as a "visual clipboard manager," and it definitely shows. I've been using Copied for a while now, and while it works as intended, it's not terribly impressive in terms of design. Paste, on the other hand, emphasizes visuals, especially on the Mac. The app itself looks and feels like something that Apple made themselves, and it features plenty of white (unfortunately no dark theme like Copied yet). Images appear as larger thumbnails to give you a better idea of what it was, in case you forgot. However, because of this, you do get to see less on the screen at once, compared to Copied.

But if you prefer a bit more visual oomph, then Paste is the way to go. It also provides extra bits of detail, such as image dimensions, what app you copied from, and how long ago. So while Paste focuses more on looking good, it still manages to pack in a lot of useful information that other apps don't include.

Paste is free on iOS, and works fine on its own. However, it works best as a companion to the Mac version, which is on the Mac App Store for $14.99. If you're not sure about committing to the Mac version, there's a free trial available from their website. If you want to use Paste on your iPad, though, you need to unlock that via a $4.99 in-app purchase.

I have both the Mac version of Paste 2, as well as the iOS version, and they are seamless when iCloud sync is enabled. Anything that I copy to my Mac's clipboard appears on the iOS version of Paste, and vice versa. At the moment, Paste supports text, images, links, files, and pretty much whatever else you can copy.

I'm a bit disappointed that the iOS version doesn't have the colorful visual headers to tell you what kind of snippet it is, such as a link from Droplr, Safari, or Tweetbot. Maybe this can be changed in the future, but it's not a big deal since there is text that indicates what the source is.

Paste, like Copied, also has support for lists, though they're called Pinboards. These pinboards serve as categories to help you organize your clippings, and you can create as many as needed. To add a new one, make sure you're out of the default "Clipboard History" view (just tap on the "X" or swipe down on the screen). Then tap on the "..." button in the top right to select "Manage Pinboards." Paste includes a "Useful Links" pinboard by default, but you can delete it (and any other ones) by tapping on the minus button next to it. Add new ones by tapping on the "+" button in the top left. Give it a name, choose a color to label it with, and then "Save."

To view a clipping, just tap to select it, and you'll be able to view it in all of its glory. For example, large images show up full size, so you may need to pan the image around to see every last detail. When you want to copy an item in the clipboard, you can tap on the "copy" button in the bottom left when viewing it, or just swipe to the right from the list. When you swipe left, there are actions for deleting, renaming, pinning to a board, or sharing via the iOS Share Sheet. You can also do actions on a batch of items by tapping on the button in the top right corner.

Looking for a particular clip but don't remember exactly what it was? Paste also has support for searching, and it's able to search through any text that's attached to a snippet. However, if you want this to work with images, you may need to rename them to be searchable first.

Paste is a beautiful and intelligent clipboard manager that helps you keep your snippets intact from Mac to iOS. 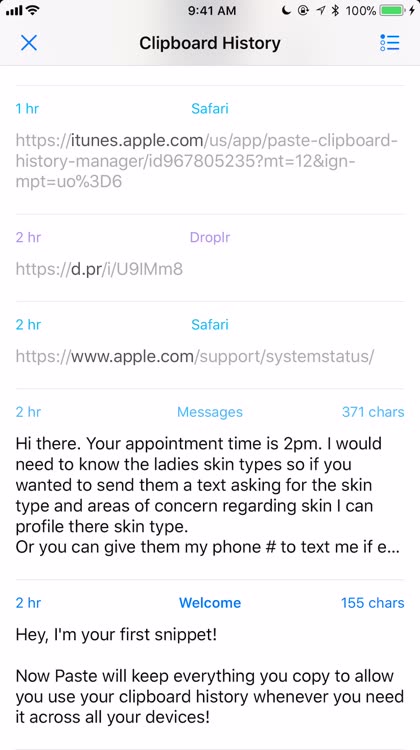 Paste is a gorgeous app that makes it easy to manage your iOS clipboard. The app is simple, powerful, and smart. The design is beautiful and it's incredibly fast and responsive. If you have the Mac version, then the iCloud sync works flawlessly, as any new changes to your clipboard are reflected immediately on the other device. Paste's emphasis on the visual elements also means it's easier to recognize your clips, and the detail about each is handy to have for reference. 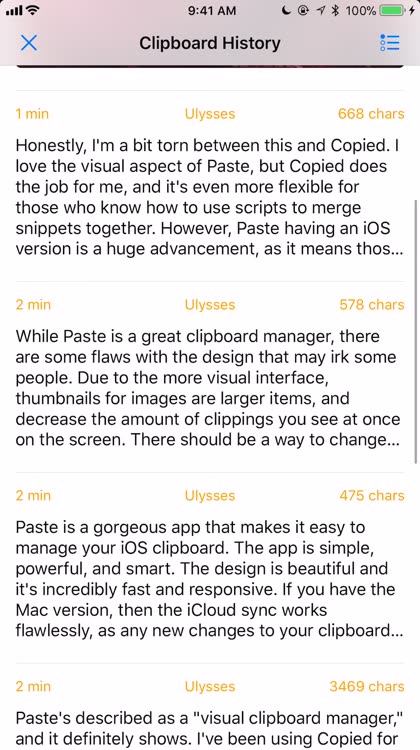 While Paste is a great clipboard manager, there are some flaws with the design that may irk some people. Due to the more visual interface, thumbnails for images are larger items, and decrease the amount of clippings you see at once on the screen. There should be a way to change the size of thumbnails if one desires it.

This one may not be a big deal for some, but I wish that the iOS version had colored headings and icons for items to show their original source. This would be more consistent with the Mac version, and look better for an app that focuses on visual elements.

Honestly, I'm a bit torn between this and Copied. I love the visual aspect of Paste, but Copied does the job for me, and it's even more flexible for those who know how to use scripts to merge snippets together. However, Paste having an iOS version is a huge advancement, as it means those who prefer Paste can now have their snippets on all of their Apple devices.

Paste is available on the App Store as a universal download for your iPhone and iPad for free. To use it on the iPad, you must unlock it through the $4.99 in-app purchase. The Mac version is available for $14.99 on the Mac App Store. 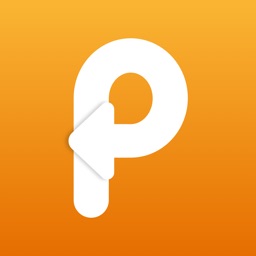 Paste (legacy)
Dmitry Obukhov
Nothing found :(
Try something else