You are using an outdated browser. Please upgrade your browser to improve your experience.
by Christine Chan
August 8, 2016 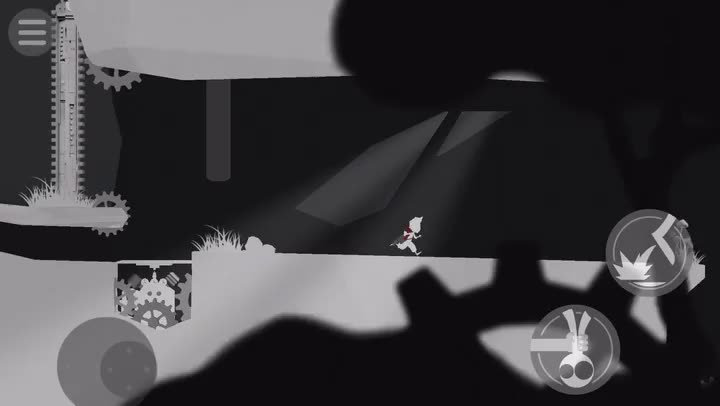 Albert & Otto ($0.99) by Mokuni LLC is a stylish and haunting puzzle platformer that is reminiscent of the cult classic LIMBO. If you’re a fan of eerie black-and-white platformer worlds that make you think, then you will probably enjoy Albert & Otto as well.

When I was growing up, I remember I put in a ton of hours on classic platformers like the original Super Mario Bros. As a kid, I didn’t really think too much about strategy and how to solve things, because hey, I was a kid and liked to just push buttons and see what would happen on the screen. But as I grew older, I learned about some strategies and how to actually solve those puzzles I always ended up getting stuck on. So I’ve grown to love platformers even more as time passed, and now I just can’t get enough of them. When LIMBO first came out, I was in awe with the style, and let’s face it — the challenging puzzles were fun too, and quite rewarding once you figure them out. Since LIMBO originally came out, there have been many other games that follow in its footsteps, with some being up to par and others not so much. When I saw Albert & Otto on the App Store, I was intrigued enough to check it out myself. 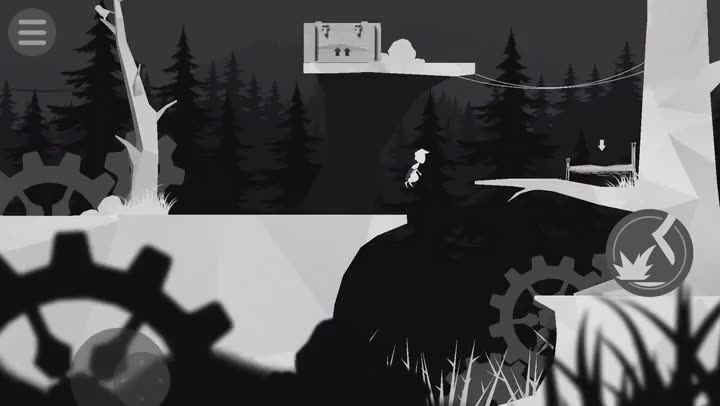 In terms of visuals, Albert & Otto falls in line with the black-and-white silhouette style of LIMBO and other similar games. However, unlike LIMBO, Albert & Otto has much sharper graphics, since it isn’t a “dreamscape” environment that you’re in. In fact, the game carries a somewhat minimalistic design, as everything is flat and sharp, with some rough shading on elements in the setting. The backdrop is rather nice with the black silhouettes set against the dark gray background, and the foreground is full of beautifully designed architecture and obstacles that contrast nicely with the gloom-and-doom of the backdrop. Since the game is like LIMBO, you’ll only find shades of black, gray, and white in the game, with the occasional splash of blood red due to Otto the bunny and shards of drawings that you will need to collect. To top things off, the game has an atmospheric and haunting soundtrack that truly immerses you in the game world, so I recommend using your favorite pair of headphones while playing. There are also some fun and grisly sound effects, which I don’t recommend if you’re squeamish, though everything is in good fun.

Albert & Otto is a rather interesting game. The story takes place in a creepy, 1939 Germany where the focus is placed on a mysterious girl with bunny ears, who also appropriately has a red bunny companion named Otto. You’ll want to find out who this girl is, and the only help you’ll have is from Otto, who you eventually find as you set out on the journey with Albert. As you venture out into the eerie Germany setting, you’ll find clues about who the girl is through painting shards and letters in mailboxes that contain child-like drawings. And while the game features chapters, there’s a seamless transition between each level so that you’re never abruptly interrupted. It all flows together flawlessly, and the only time you know you’re in a new level is when the chapter title reveals itself in the beginning. You can also go back and replay specific chapters you’ve completed with the Chapter Select screen. The game also has plenty of checkpoints, so you don’t have to go back very far if you end up dying while solving a tough puzzle or encounter a difficult boss battle.

The controls in Albert & Otto are simple and straightforward, though some actions take a bit of getting used to. To move left and right, you’ll use the virtual joystick in the bottom left corner, thought it “floats” to wherever your thumb is. To jump, you’ll press on the jump button in the bottom right corner. The ability to do a double jump is gained once you find Otto the Rabbit, who you can also drop, pick up, and remotely control with a touch of a button. Albert is also equipped with a pistol, which you can use to shoot down crows and other enemies by placing your finger on the right side of the screen, drag to aim, and then release to shoot. You can also go in and out of buildings with the button that shows up as you’re in front of a door, or interact with switches in a similar fashion. Pushing objects is done by just going up to them and moving forward, and eventually you gain the ability to levitate objects (like sheep) with Otto. Sometimes obstacles that you need to progress can be shot at with your gun as well, so make sure to keep an eye out for things on ropes that can be shot and the like. 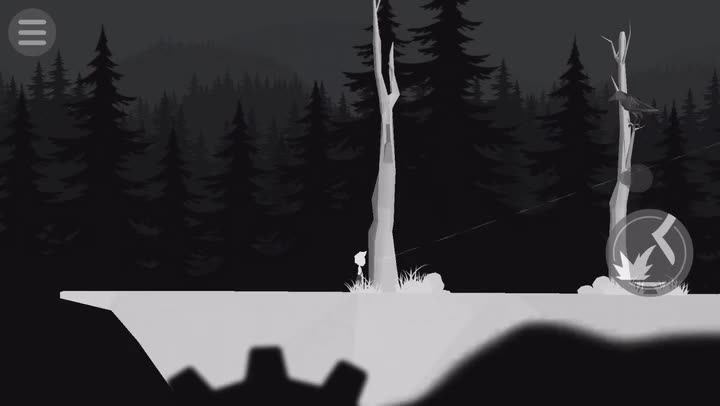 Like I said, the controls are simple enough, but I think they could be better optimized. I found the sensitivity for aiming to be a bit too sensitive, as sometimes it was hard to get the line to line up correctly with where I wanted to shoot. I also felt that the joystick wasn’t sensitive enough, so I would really have to push my thumb in one direction to make Albert move as fast as he could. It would be nice to see some sensitivity adjustment options in the future.

I’m pretty early on in the game still because the puzzles themselves are rather challenging, and some of the platforming will take all of your skill to get through. I just think the game would be better if the control sensitivity was improved a tad, but it is still manageable in its current state, as long as you have a little patience. I am in love with the dark and eerie visuals and music, though, and will be coming back to this one. At the moment, Albert & Otto only has one episode, but more are coming in the future. If you don’t mind cliffhangers at the end, then this game is worth a look.

I recommend Albert & Otto if you enjoy creepy, but fun, puzzle platformers with an engaging story. You can find the first episode of Albert & Otto on the App Store as a universal download for your iPhone and iPad for just $0.99. 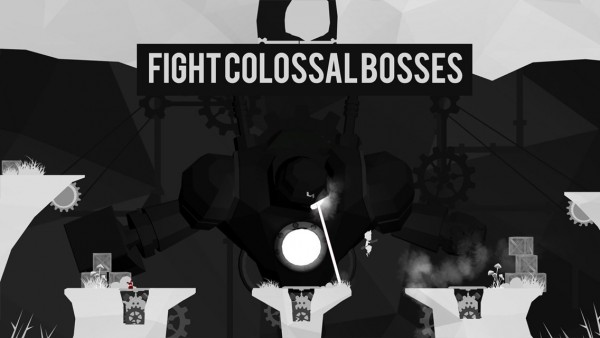 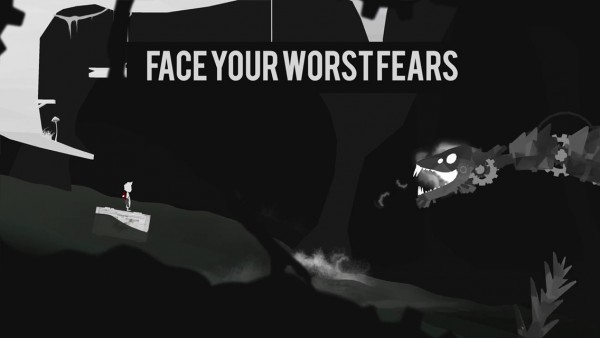 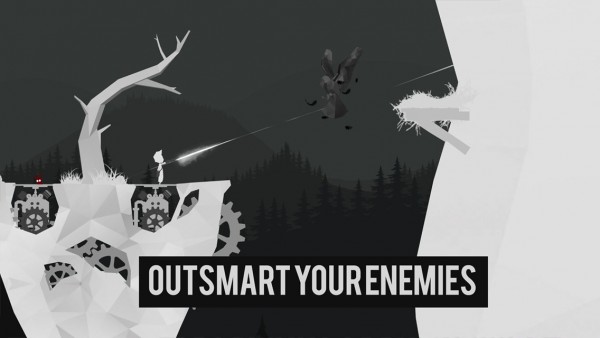 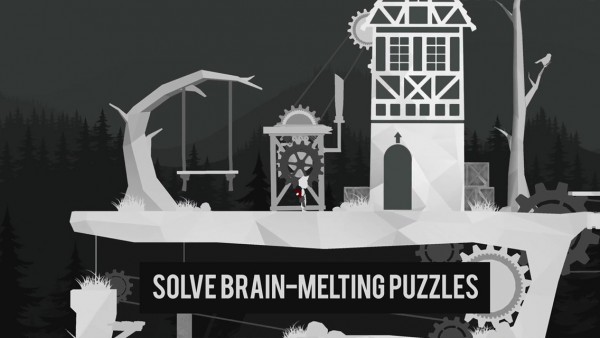 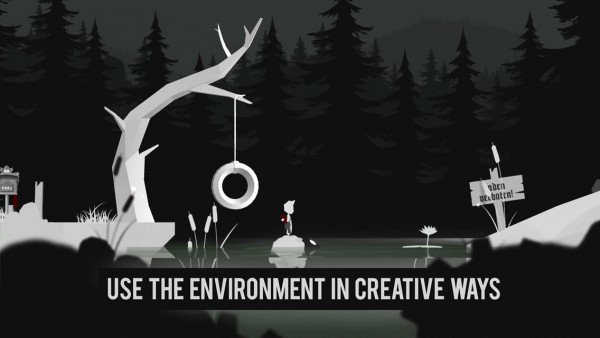