You are using an outdated browser. Please upgrade your browser to improve your experience.
by Christine Chan
November 17, 2016 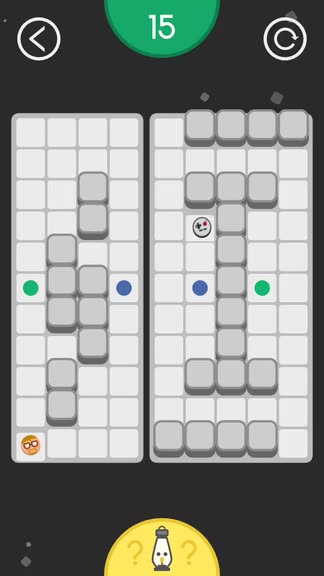 Asymmetric ($1.99) by Klemens Strasser is a puzzle game that will give your heartstrings a slight tug. If you enjoyed games like Stay, Mum and Love You To Bits, then you will enjoy what Asymmetric brings to the table, especially if you’re a fan of puzzles.

Lately, there’s been a deluge of great action and arcade games on the App Store, and while they’re great and all (like SteamWorld Heist and RunGunJumpGun), I do need a break from these games every now and then. When I want to relax but still keep myself entertained and stimulated with a game, I tend to pick a puzzle game to do the job. So when the message about Asymmetric, a simple puzzle game from a student and indie game developer, hit my inbox a few days ago, I was intrigued and caught my attention. I’ve tried it out, and it’s rather impressive and worth a look for puzzle lovers. 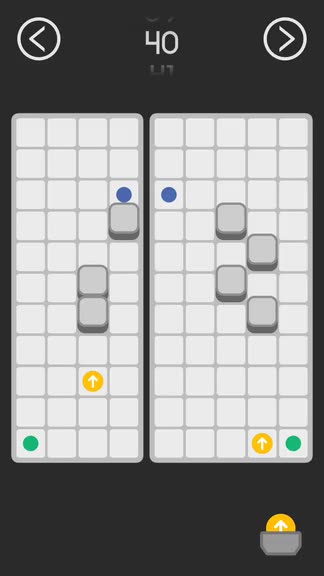 Visually, Asymmetric features a simple and clean aesthetic that would appeal to fans of minimalist design. The game has a nice color palette that consists of whites, grays, blacks, and splashes of color that provide a great contrast with the background tones. Even though the two main characters are nothing more than basic circles, they have their own facial expressions drawn on them that breathe a bit of life into them, and the various obstacles that you’ll eventually come across, such as portals and rocks, are easy to recognize when you encounter them. While there is not too much detail otherwise with the visuals, the developer did give it a bit of depth with the shadowing on blocks, so it’s not completely flat. To top things off, Asymmetric features an atmospheric and soothing piano soundtrack that is composed by Stefan Putzinger, and it’s an absolute delight to listen to while you play. I truly love puzzle games that have tranquil music like this, because it helps me relax and focus on the puzzles at hand.

Like other puzzle games, Asymmetric is level-based. The game has six different chapters with a total of 66 levels to go through (12 in each except the first one, where there’s only six). In order to unlock a chapter, you’ll have to clear at least nine stages in the previous one, but you can access any level in a chapter as you please — they don’t have to be played in chronological order. The goal of the game is easy enough: get Groopert and Groopine to their respective goal points (green circle) from the starting point (blue circle). But be warned — it is much harder than it first appears.

The controls in Asymmetric is straightforward and intuitive, but it does take some time to master because there’s a catch: they move in opposite directions of each other. To have them move, just swipe anywhere on the screen, and both move at the same time. With this in mind, you’ll have to plan your moves before you move them, because things get more complicated once the other game mechanics come into play, like blocks in your path, portals, holes, speed pads, and more. On top of that, each level only gives you a limited amount of moves, so you have to think carefully about the most efficient way to get to the goal. The move counter does not go down if both characters are stuck and unable to move in the opposite direction of your swipe. 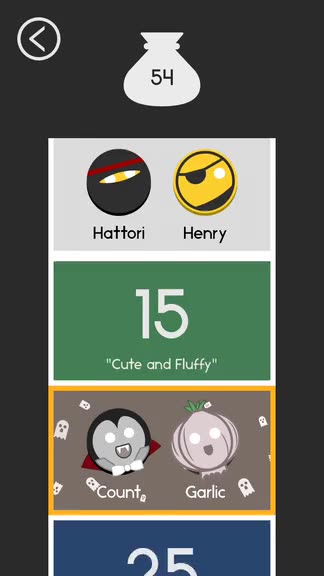 Once you get both Groopert and Groopine to their proper destination, then the level is complete. You get awarded coins depending on how many moves were left by the time you completed it. This means one coin per move remaining, so the more moves remain, the better. The coins can be used to get new character sets in the shop, or you can spend them to get hints on levels that you are stuck on. The hints will partially solve the puzzle for you, and it’s up to you to figure out the rest. Considering that you can get coins quickly if you’re good at the game, it shouldn’t be too hard to make up for used coins. There are no in-app purchases for coins, which is rather refreshing to be honest.

For those who are much more creative, there is a built-in level editor for you to create your own Asymmetric stages. While there is a “Featured” tab while you’re in the level builder section, it’s not active at the moment and only says “Coming Soon!” so we can only assume that it will be available after more players submit their creations to share with other players.

I’ve only spent a bit of time with Asymmetric, but it’s a rather enjoyable experience so far. I love the minimalistic graphics, the classy piano soundtrack is top-notch, and the controls are intuitive and responsive, though it does require some patience and practice. The levels are challenging enough, and the coins are a nice reward that can’t be bought, so it’s rather refreshing and a true test of your mental prowess. Plus, with the level editor ready from the get-go, it gives players even more reason to keep playing even after beating all of the main levels. Hopefully the featured section opens up soon so new user-created levels can be downloaded.

I recommend giving Asymmetric a look if you’re a fan of puzzle games and want something challenging to check out over the upcoming holidays. You can find Asymmetric on the App Store as a universal app for the iPhone, iPad, and Apple TV for just $1.99. There is even an iMessage sticker pack and zero in-app purchases. 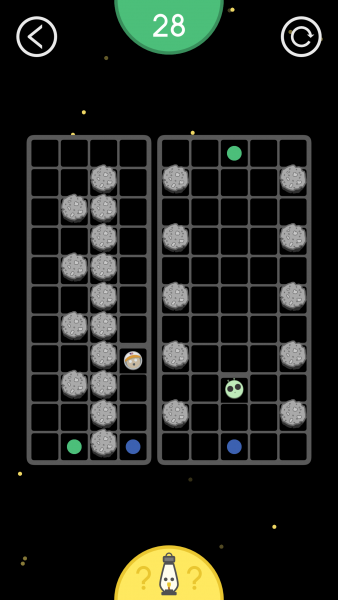 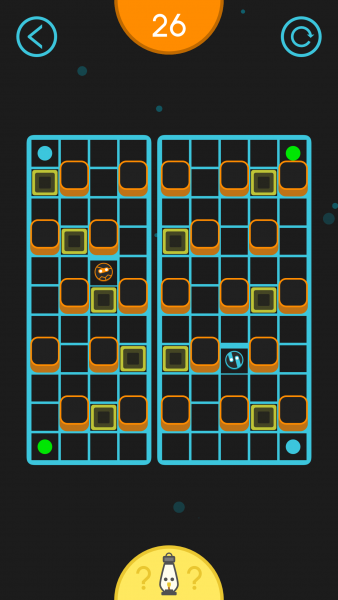 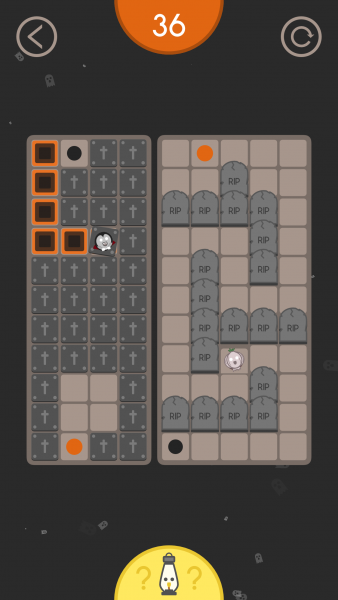 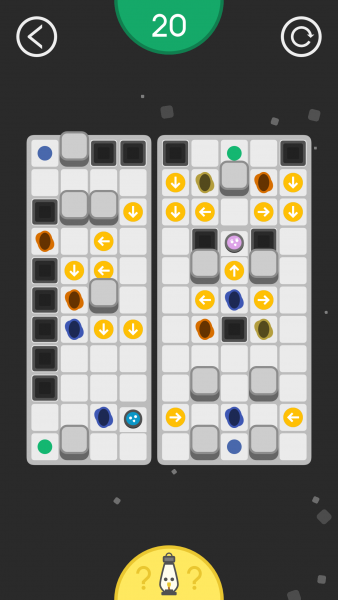 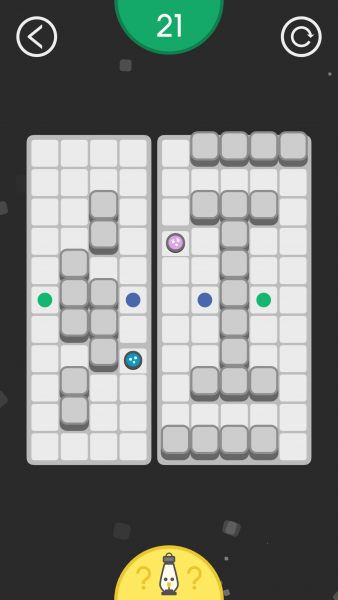 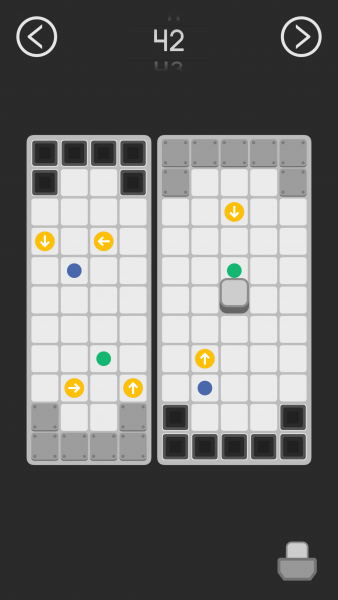 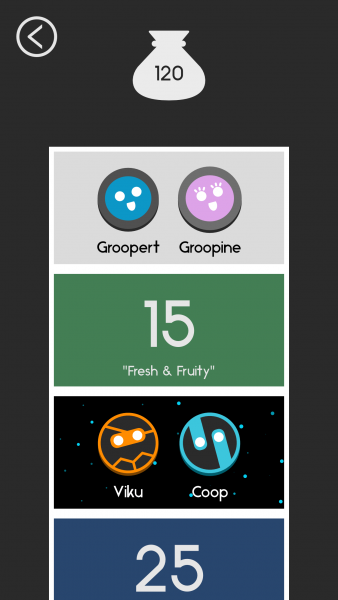