You are using an outdated browser. Please upgrade your browser to improve your experience.
by Christine Chan
April 30, 2015 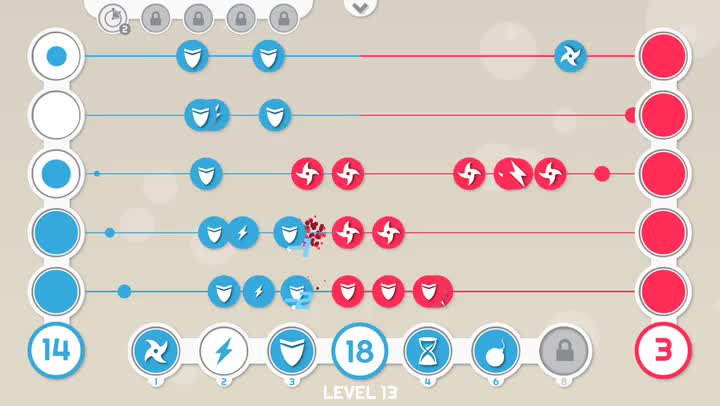 Battledots ($0.99) by Kloppe Media is a fast-paced strategy game of wits and speed. If you are looking for a strategy game that is unlike anything you’ve played before, then Battledots is a fine addition to your game collection.

I admit it — I’m not the best when it comes to formulating a strategy in most games. Regardless, I just love games, and I am always open to trying out something new and different. So while strategy is not my best forte, I will still dabble with it from time to time. So when I first saw the trailer for Battledots, I was intrigued, since there aren’t many offerings on the App Store that are like this. Now that it’s out in the wild, I gave it a try, and am not disappointed. 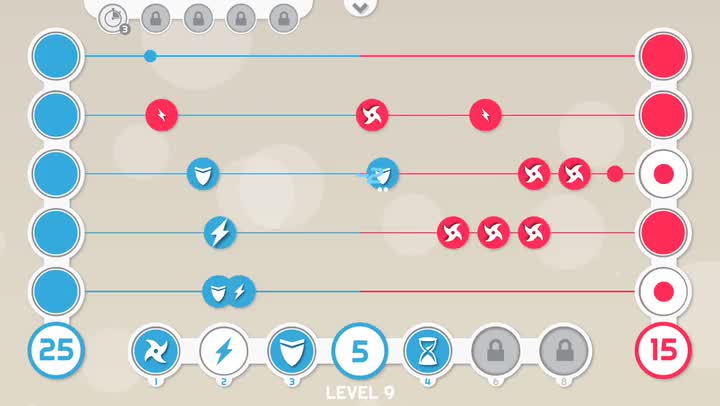 The visuals in Battledots is minimalistic and flat, so it follows along with the latest trend in gaming. Regardless of how you feel about the trend’s popularity, you have to admit — Battledots looks pretty darn good for what it’s worth. The off-white, creamy beige color for the background (more can be unlocked as you play) works nicely since the bright blue and red dots contrast well with it, especially with the white iconography. Animations in the game are buttery smooth and move fluidly together, and there are some pretty cool particle effects that can occur in the heat of battle. The electronic soundtrack is delightful to listen to, and does help you get pumped up for the impending dot battle.

There are several different game modes in Battledots: single-player campaign with over 100 levels, endless, and local (one device) or online cross-platform multiplayer. Regardless of the mode you choose, the basic premise of the game is the same: you attack the opponent while defending your own base, and this is all done with dots that travel on straight line paths that connect both bases.

Over the course of the game, players will unlock 15 different dots that they can pick and choose to use in their arsenal. Each dot has its own unique ability that will aid or hurt you in battle. You start out with the basic attack shuriken, but you’ll soon find the lightning dot that travels faster and does more damage, a shield that will block you from enemy attacks, an hourglass to freeze all opposing dots on a line, and more. After each game, you may also get the chance to obtain a powerful Special Dot that can affect the entire battlefield, so make sure to use these wisely.

The controls in the game are simple to pick up and learn, but difficult to master since the game moves so quickly. Along the bottom of the screen will be your equipped dots. On the left side will be five large dots that serve as your bases — the right side of the screen is for the opponent. The thin line that connects the bases together starts out evenly split from the middle with the appropriate color on each side, but this will shift as one side begins to overwhelm the other. To attack, tap on the dot you want to summon, and then tap on the lane you want it to travel on towards the opponent.

While you can switch back and forth between summons, you can also just keep spamming one type of dot to overwhelm your opponent too. However, keep an eye on the number at the bottom — this is the amount of summoning points you have, and it’s crucial to know this because each dot costs some points to call out. You get more of these points once your attacks hit their base and chip away at their hit points, which is shown in the bottom corner of both sides, respectively. Whoever can get their opponent’s hit points to zero first will be the winner. 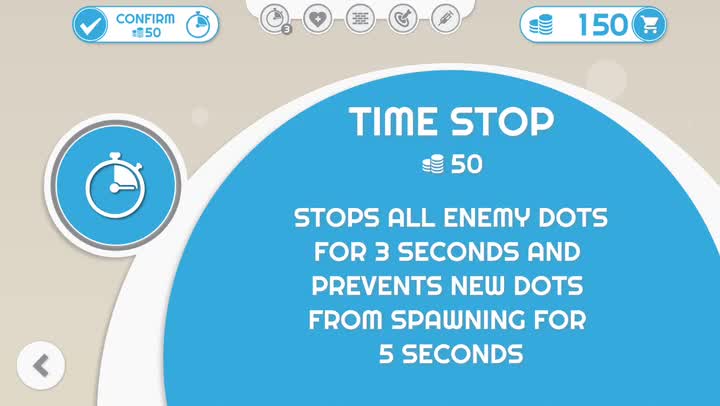 While it sounds easy, the game is fairly difficult. You have to manage your resources while also seeing how the opponent is attacking you, and react in a timely manner, or else you will be swarmed, and that’s not a pretty picture. Things start out easy enough in the beginning of the single player mode levels, but things pick up rather quickly. You can also earn coins for successful runs, and these can be used to purchase power-up dots to use in battle.

Surprisingly enough, Battledots does not implement Game Center integration, but I think this has to do with the cross-platform support for online games. What this means is that the developer handles all online matchmaking with their own servers, and you can play against people who have the game on other platforms, like Android and Windows Phone, as well as other iOS players.

I did notice an annoying glitch as you input your nickname for the online leaderboards though. If you make a mistake and hit the backspace button on the keyboard, it just moves the cursor one space back, but doesn’t actually delete the letter or character that you wanted to get rid of. The only remedy to this was to cancel and try again. Considering that the landscape keyboard is annoying to use on my iPhone 6, this was a bit irritating, resulting in multiple attempts to get my name in.

So far, even though I’m still trying to make some progress in the single player mode, I’m finding the game to be fun and challenging. I love the simple style and music, and the controls are easy enough. The gameplay itself is unique, fast-paced, and challenging, which rewards strategy and punishes those who don’t plan ahead. Be warned — this game is not for those who may get easily frustrated.

I recommend checking out Battledots if you are into strategy games and want something that moves at a rapid pace. Battledots is available on the App Store as a universal download for $0.99. 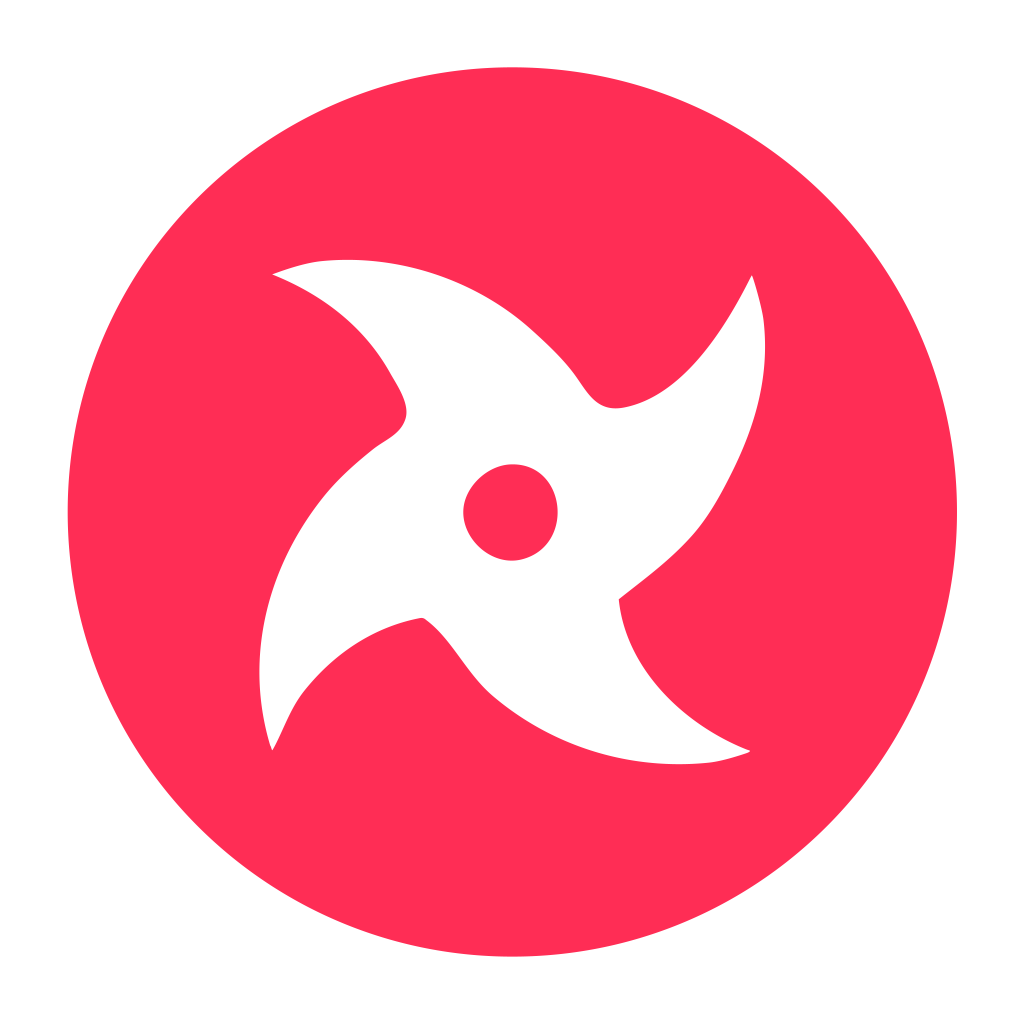 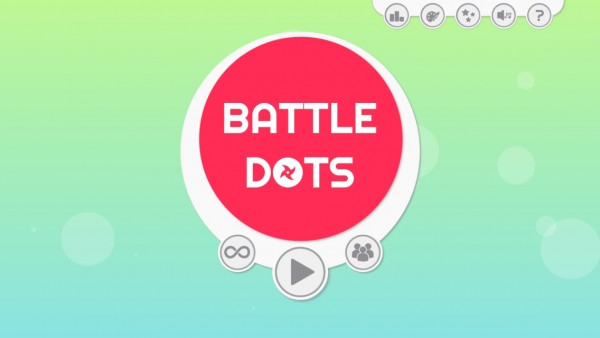 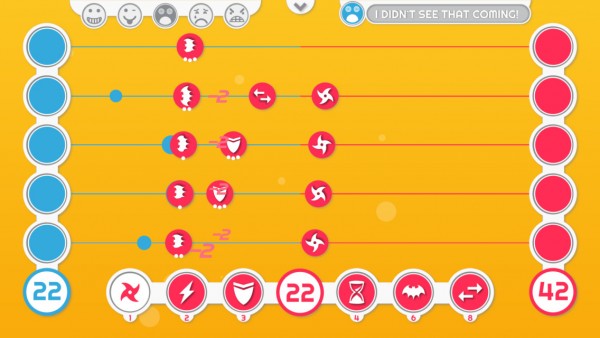 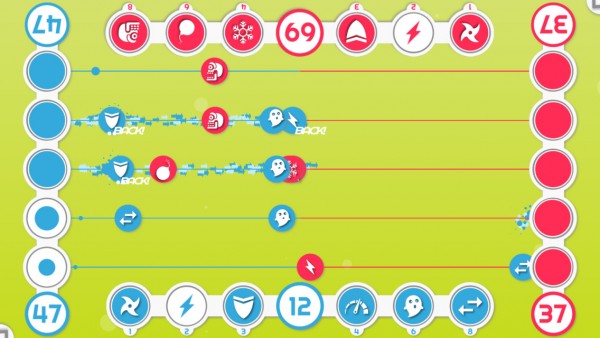 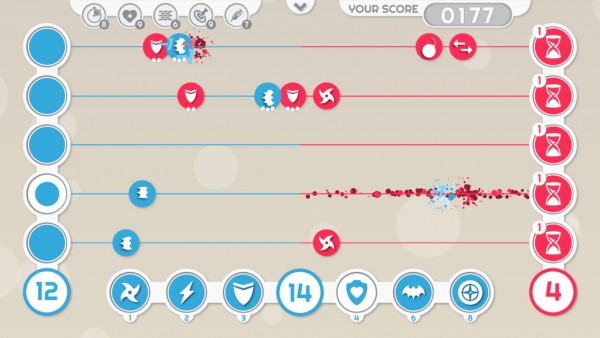 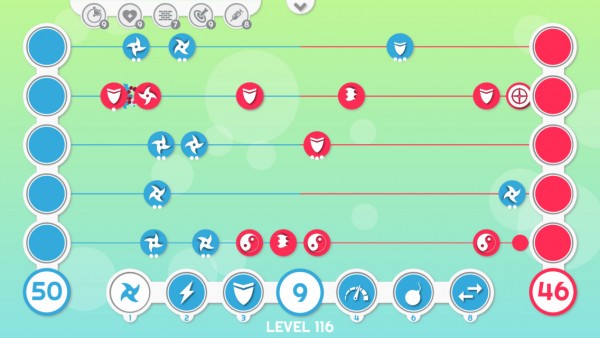