You are using an outdated browser. Please upgrade your browser to improve your experience.
by Christine Chan
March 2, 2016 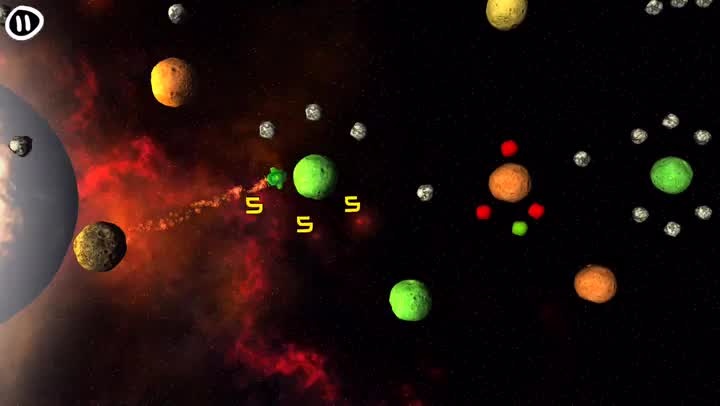 Chased By The Sun ($1.99) by Jonathan Rubinger is a somewhat endless runner where you must outrun, well, the sun. You know, that giant thermonuclear plasma ball that lights up the universe? It’s right behind your little green ship and will burn it up if you fall behind. If you enjoyed games like Tiny Wings, Space Chicks, and Ski Safari 2, then chances are high that you will like what Chased By The Sun has to offer.

When times are rough, I like to take my mind off of things by playing some games on my iOS device since I always have it on hand. While I do like lengthy games every now and then, I find myself playing quick mobile titles more frequently since I can enjoy them in short bursts throughout the day. Typically, these games are arcade style or puzzles, or even endless runner types. Regardless, they give me enough simple joy throughout the day to keep me from going insane at times. Plus, I love a bit of humor every now and then. So when the news of Chased By The Sun hit my inbox, I was eager to give the game a try, thanks to a hilarious trailer. Now that I’ve given the game a shot, I’m definitely not disappointed. 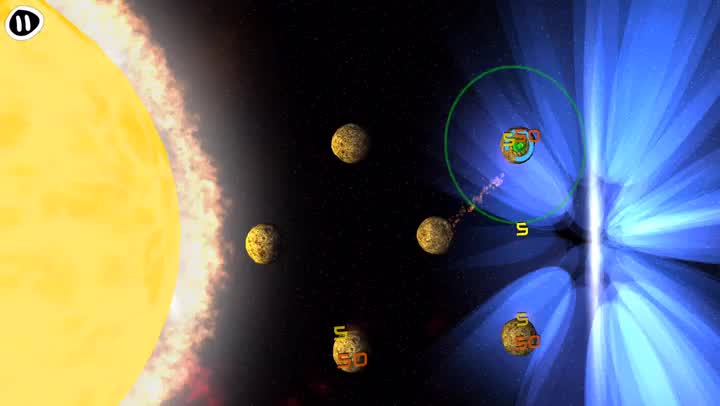 The graphics in the game are fairly simplistic but polished, so it looks pretty good on Retina screens. As you’d expect from a space-themed game, Chased By The Sun has an intergalactic backdrop that is full of dark and rich colors that contrast nicely with the pitch black darkness of the universe. The moons that you will be hopping onto are bright and vibrant, so they stand out nicely against the otherwise vast emptiness of space. The small asteroids are also clearly indicated whether they will harm your ship if you don’t go in the right order, or whether you are able to collect them as a resource. Everything in Chased By The Sun is also incredibly detailed, from the lavish backdrops to the textured surfaces of moons and asteroids. Animations are smooth and fluid, which is good since the game makes you move quickly due to the fast-paced nature of the sun being right on your tail. The soundtrack is also a nice touch to the game, since it has a rather suspenseful and thrilling tone to it, which is oh so fitting for you know, being chased by the sun that will eventually end you if the asteroids don’t.

In Chased By The Sun, the levels are split up into five different solar systems, with about five levels in each. While a total of 25 levels may not sound like a lot, the game is rather challenging, so it will take some time to get through all of the levels. Plus, the game utilizes a star system, so you can earn up to three medals on a stage by collecting enough minerals, being fast, and not dying so much. Your total score on a stage is also determined by these three factors, so the game forces you to think before you jump while also having you be quick about it. When both of these things are taken into consideration, Chased By The Sun is a real test of quickness, reflexes, and skill. 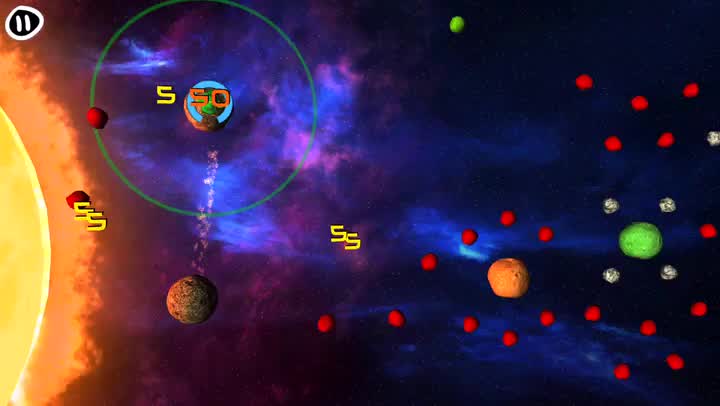 The controls in the game are simple enough: just tap on the screen to launch your ship from one moon to another. While you can tap while floating in space, your thrusters will lose momentum each time until you land again, so it is recommended to make your moves in a single bound. To control where your ship flies to, just tap on the spot you want to land on, and you’ll fly in that general direction. Sometimes there will be asteroids that surround a moon, which you’ll need to avoid since you die if you crash into it, or it’ll use up a shield. There are also some asteroids that are red, meaning they’re unstable, so you have to jump onto the moons in the right order to get them to turn green, allowing you to pass them and gather minerals from the surface. Due to this, the game has a bit of a puzzle element to it, as you’ll have to pay attention to the formation of the asteroids and moons, locating the correct path to take while making sure you don’t fall behind, because then you’ll be engulfed by scorching hot plasma, and well, that’s no fun.

Each stage will also be split up into several different sectors, and there are checkpoint gates that you can reach. These let you pick up from that point if you die, so you don’t have to start over from the beginning unless you want to (for the perfectionists). While the game doesn’t give you a limited number of lives, you do get penalized for each death in your final score, so while you technically get unlimited lives, it’s best to not be so haphazard about it if you care about high scores and earning stars. And while the game starts out pretty easy enough, the different systems introduce new game mechanics, such as detonating moons, flinging rocks, shattering ice, and more. Due to the rather testing nature of the game, it’s needless to say that the replay value is high, and there is also Game Center integration.

Due to some unfortunate events that have occurred in my life recently, I haven’t been able to spend as much time with Chased By The Sun as I originally planned. However, the short time I have spent with the game has been rather enjoyable so far, and I love the fine details that the developer gave to the visuals and audio. The one-touch controls are simple and intuitive, so you can play with one hand if you really tried (or have large enough hands). Chased By The Sun is definitely challenging, and I can see myself coming back to this one a lot, at least until I perfect each stage.

I recommend giving Chased By The Sun a try if you enjoy hectic arcade puzzle games. You can find Chased By The Sun on the App Store as a universal download on the iPhone and iPad for just $1.99. There are no in-app purchases.

Chased By The Sun
Jonathan Rubinger 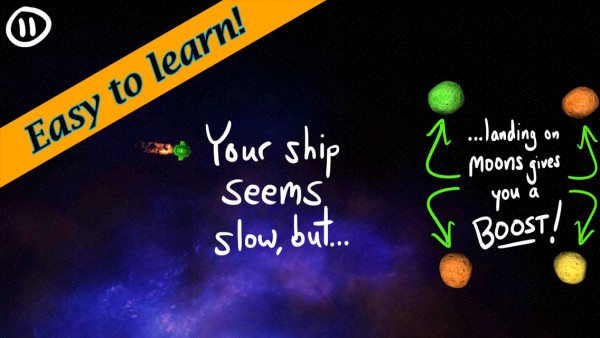 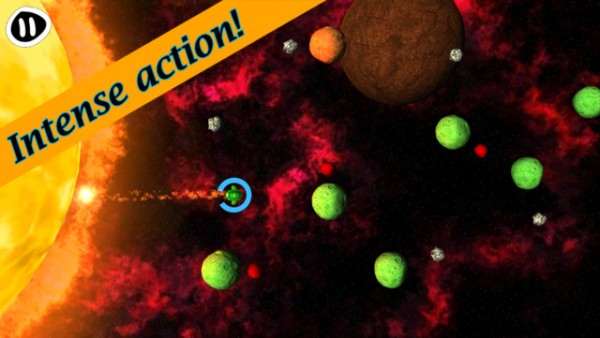 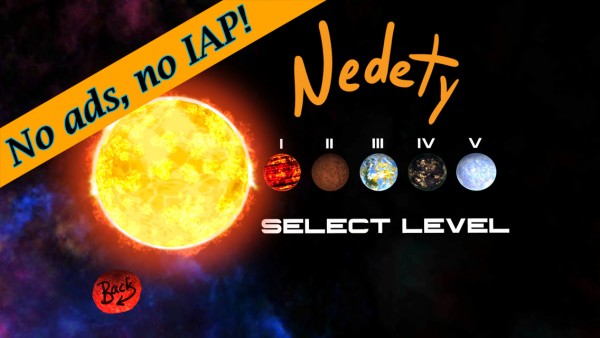 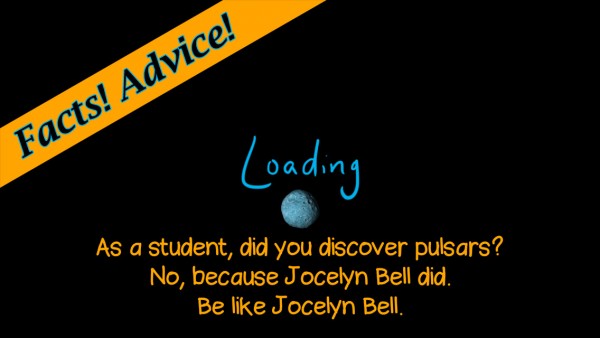 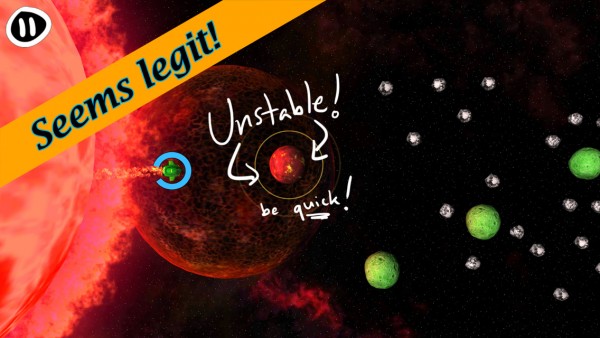 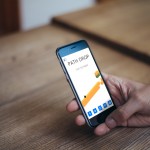 Create shapes to keep your ball rolling in Path Drop!

Investigate a secret society in Angels of Deception: Part I
Nothing found :(
Try something else