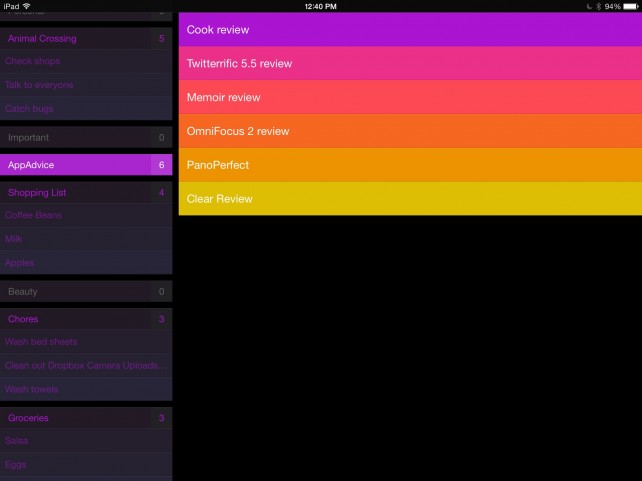 Clear - The Revolutionary Todo App ($2.99) by Realmac Software is the brand new reboot of the original Clear that launched last February. With this new version, Clear gets a slightly tweaked interface on iPhone (the font is different), but the bigger news is that it is now a universal app, with a completely new view on the iPad.

Even though I talked about another to-do list app today, Begin, Clear is still one of those “classics” that you can always turn to for basics. The iPhone version works essentially the same way, so I’m going to be covering the iPad version in-depth with this review. 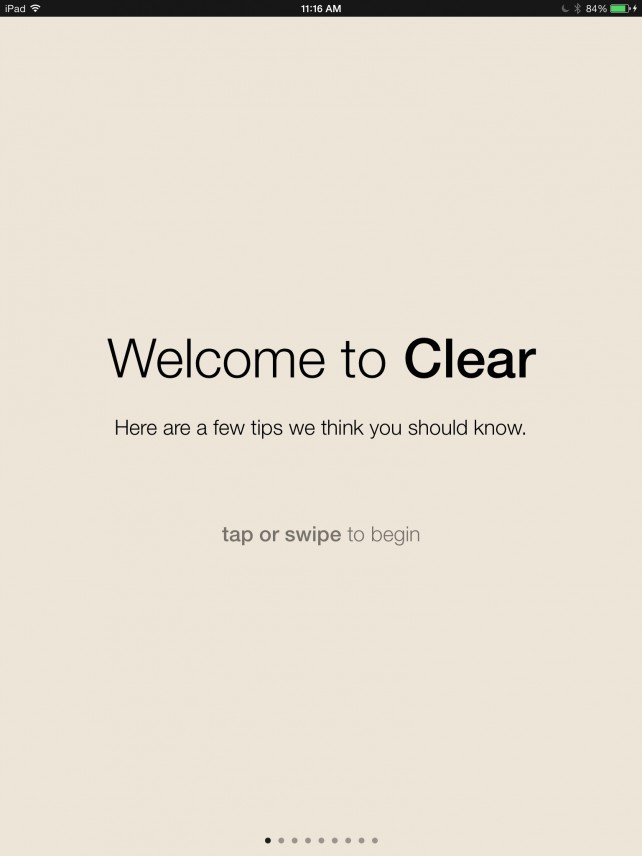 However, if you still have Clear for iPhone installed, you can copy your lists over from the old version, and then enable iCloud sync so that your lists will be available in the new version on iPhone and iPad. Your previously unlocked themes will be carried over as well, so you do not need to go through the process of unlocking them again.

On the iPad, regardless of being in portrait or landscape orientation, Clear will always be in a two-pane view. To the left, you will have all of your lists, and tapping on one will bring up the items in the right pane. To add a new list or item, just pull the screen down in the appropriate pane, and then hit “Done” or pull down again to save it and add another. This should be a familiar gesture, as it is found in the original.

While you’re viewing one list, you can get “peeks” at the contents of other lists in the left pane, with up to three items being shown. If you use two fingers and swipe down on a list in the left pane, you will unfold the list and see the rest of the items you have in it.

Now, thanks to having the two panes at once, users are able to freely move items from one list to another. To do this, just tap-and-hold an item, and then drag it to the list you want to move it to. This is a great new feature that makes task management easier when you have a lot of lists to handle. 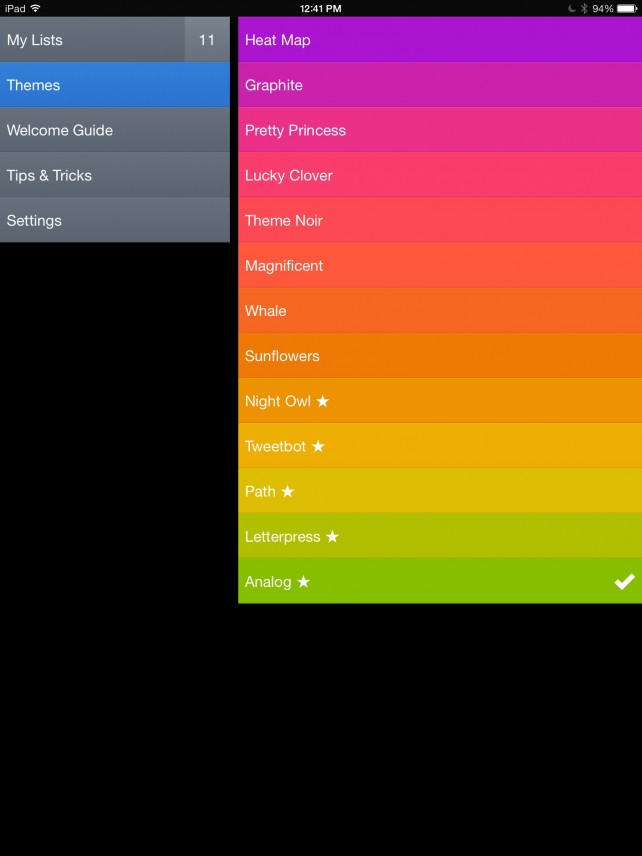 Like with the original iteration of Clear, completing an item is done by swiping right, and deletion is done with a left swipe. To access the menu, swipe from the left edge of the screen.

The Settings are largely the same as the original version of Clear, with just a new iPad toggle of Sidebar Preview Items. Other than that, Clear comes with some new themes and the ability to see what list you’re in when viewing tasks on the iPhone. Oh, and there’s a cool parallax effect in appropriate areas of the app to give users a sense of depth.

I’m really enjoying Clear on the iPad, but I’m not entirely happy with the fact that the iPhone version couldn’t just be updated, rather than be a completely new app. If you don’t have an iPad, then I don’t really see the point in grabbing this version, as the original still works fine. However, if you have been waiting for Clear for the iPad, the new features make it worth the purchase.

For those who have been waiting for reminders to come to Clear, then I recommend keeping an eye out. The developers are working on this for a future version of Clear, and I’m not entirely sure if it will be making its way to the old version.

You can find Clear – The Revolutionary Todo App in the App Store as a universal download for $2.99. 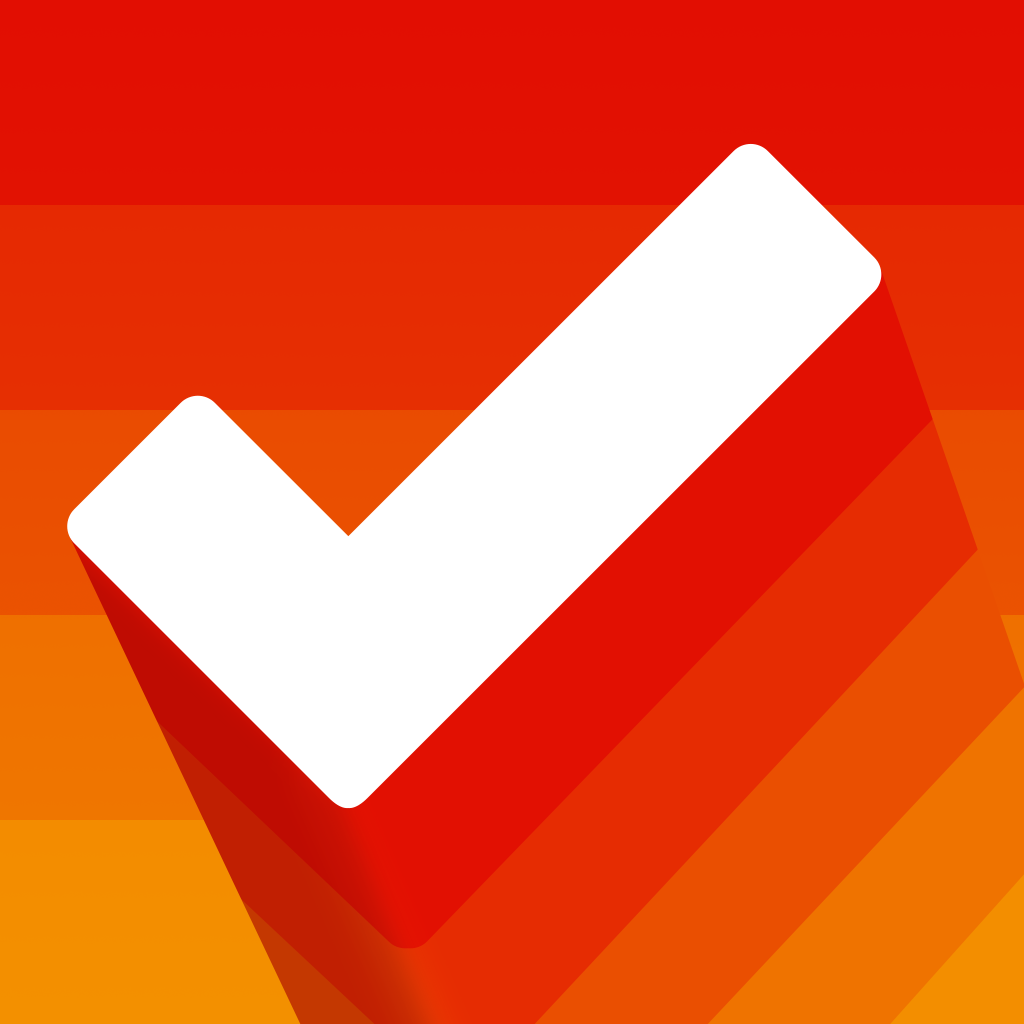 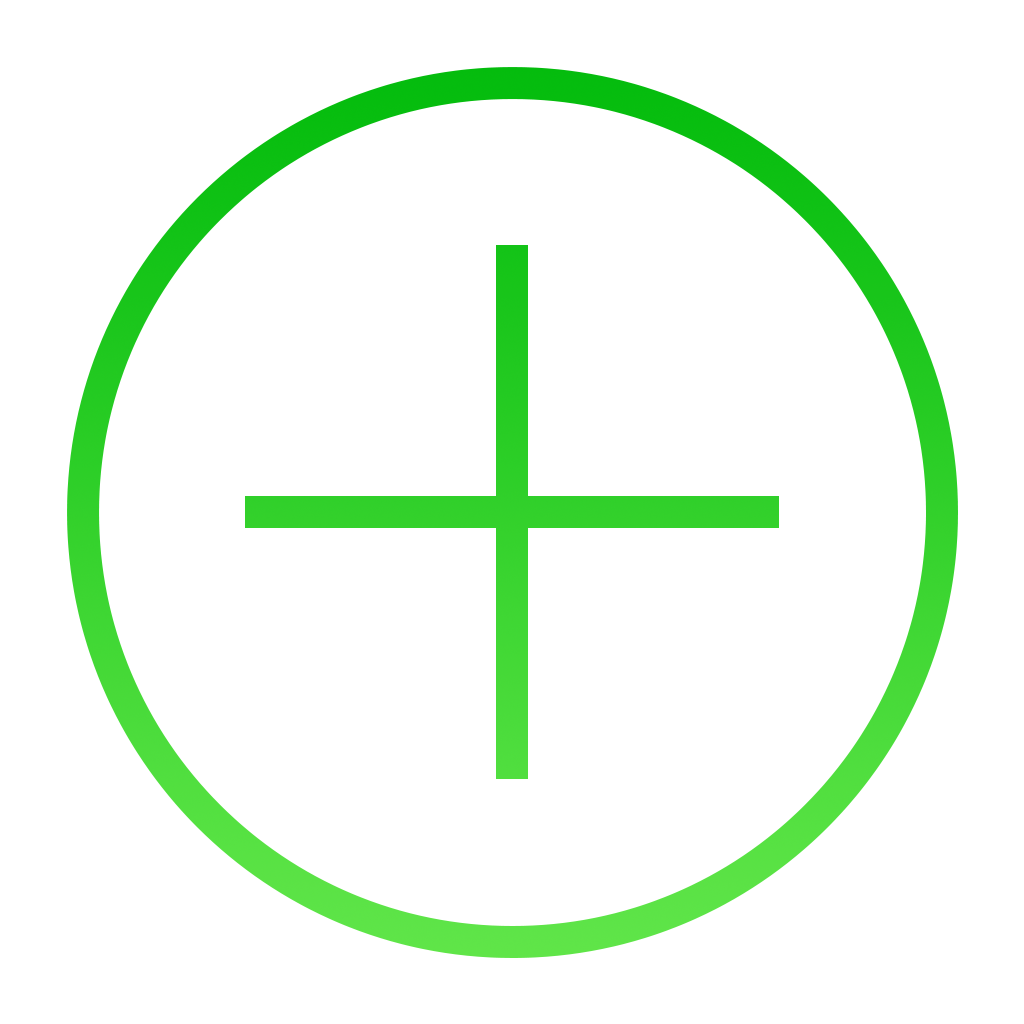 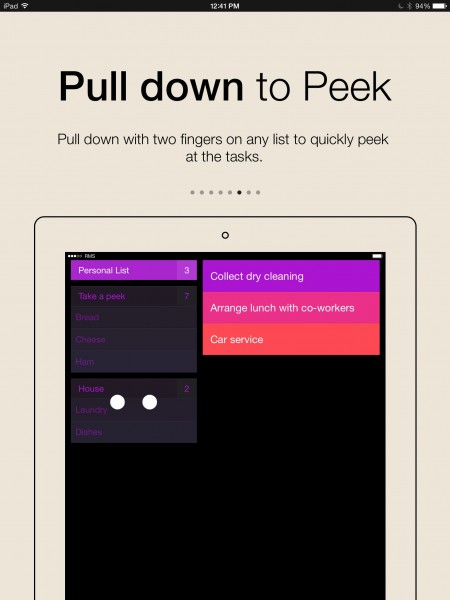 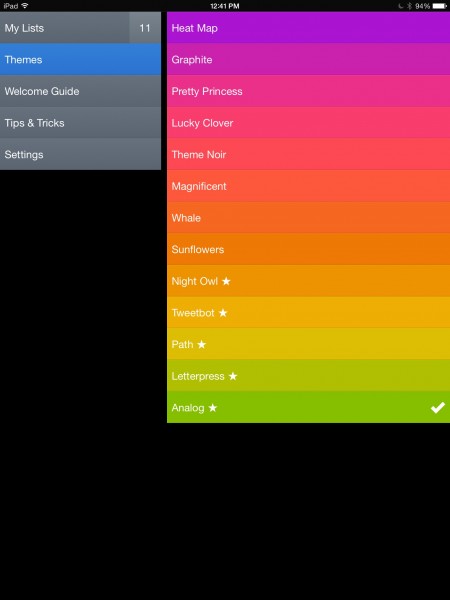 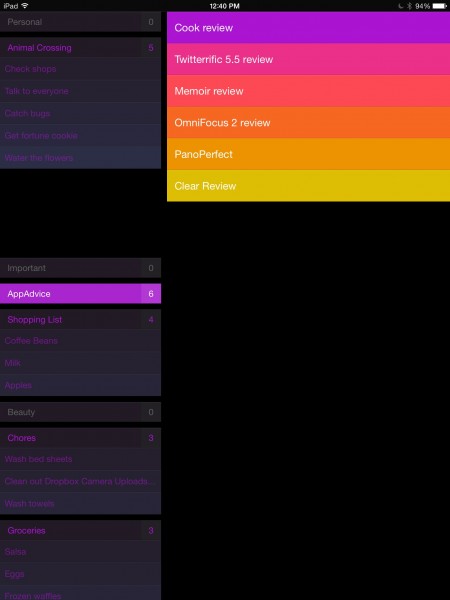 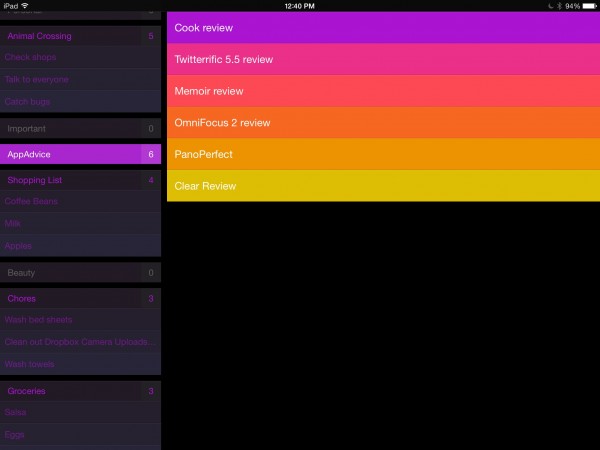 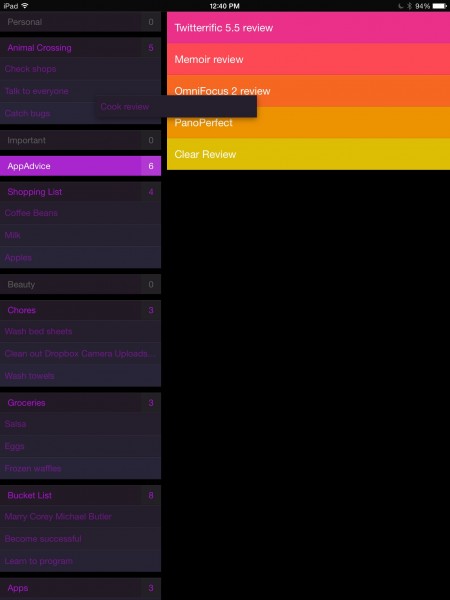 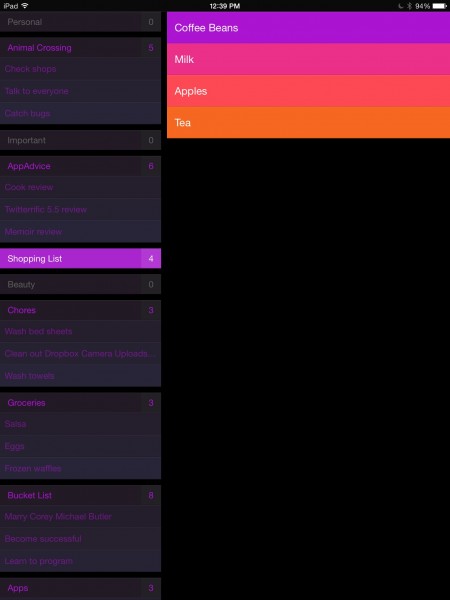 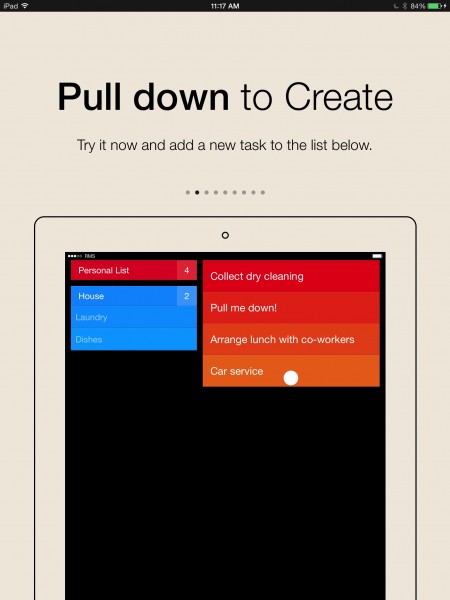 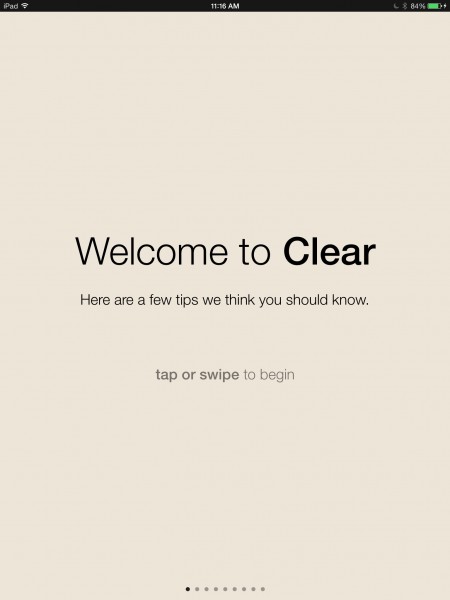