You are using an outdated browser. Please upgrade your browser to improve your experience.
by Christine Chan
May 29, 2015 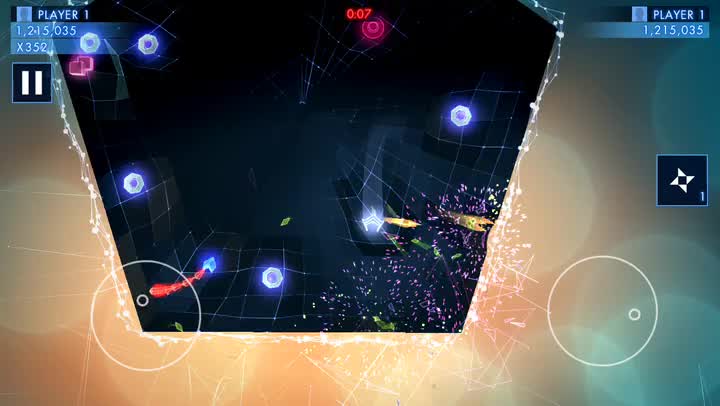 Geometry Wars 3: Dimensions ($4.99) by Activision Publishing, Inc. with Lucid Games and Sierra Entertainment is the mobile port of the explosive dual-stick shooter game that launched late last year on Windows, Mac, Linux, PlayStation 3, PlayStation 4, Xbox 360, and Xbox One. It has been a long time since the last Geometry Wars game on iOS, which has been pulled from the App Store for a while now, so this new port has been a long time coming.

When I was still in high school, I recall hearing something about a game called “Geometry Wars.” At first I thought it would be something kind of dumb, because I didn’t like geometry in school. But the moment I saw that it was an awesome looking space shooter type of game, I was intrigued and had to try it out somehow, but I didn’t have an Xbox (the original game was a mini-game that came out in 2003). Several years later, I eventually got my first iPhone as well as a Nintendo DS handheld, so I was rejoicing at the fact that I could get the new versions available at the time, which were Geometry Wars: Evolved and Geometry Wars: Galaxies. I played the heck out of both of these during those times, because they were just a fantastic way to let some hours slip by, plus I was in love with the colorful lights and explosions. This began my love for dual-stick shooters, and ever since then, I’m always eager to get my hands on these types of arcade games on any platform.

Last year, when I first heard that Geometry Wars 3 was coming out, I knew I had to get it — it’s been years since my last Geometry Wars game, and I was unable to find Evolved from the App Store. I got Dimensions on my Mac from Steam and played it a lot over the holidays, but something always stayed on in the back-burner of my mind: When is this coming to iOS?

Now it’s here, and I couldn’t be happier. 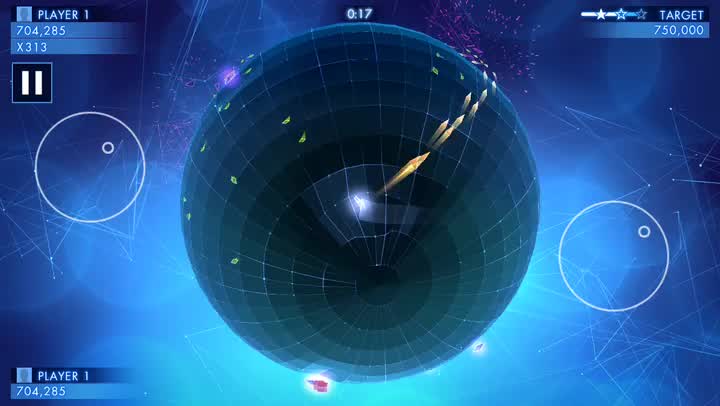 For those who are unfamiliar with Geometry Wars, the game always had a fairly retro look to it, due to the bright neon colors set against a plain black background. However, Dimensions now brings a new, 3-D perspective to the franchise, and it works out well, especially if you have a newer device since there is Metal support. In some ways, it reminds me of Super Stardust HD on PS3, which I don’t think is a bad thing. The 3-D aspect is mostly in the new Adventure mode, and the battlefields take place on 3-D objects or shapes, where your ship can move freely. However, those who prefer the traditional flat battlefield can have that in the Classic Mode, which includes some familiar challenges and some new depth. Dimensions has bright and rich colors, smooth, fluid animations, and the EDM soundtrack is a delight to listen to.

In Dimensions, there are two main game modes: Adventure and Classic. Adventure is the new level-based mode that takes place on 3-D battlefields, and each stage will be different from the one before it, since it has a nice mix of different play styles (including new game modes like Titan and Claustrophobia) and objectives to meet. You can also earn up to three stars on levels, depending on how many points you manage to rack up. There are even some challenging boss battles thrown in, where you have to learn the unique strategy involved to take them out.

Additionally, there is another section that is appropriately named “Bonus Levels.” These will unlock once certain conditions are met, and they bring some new challenges to the table. So far I only have two bonus levels unlocked: Invasion and Rhythm Duck, with both goals being to score as many points before time runs out. While they sound similar to the Classic version, they have the 3-D battlefield and a much faster pace. 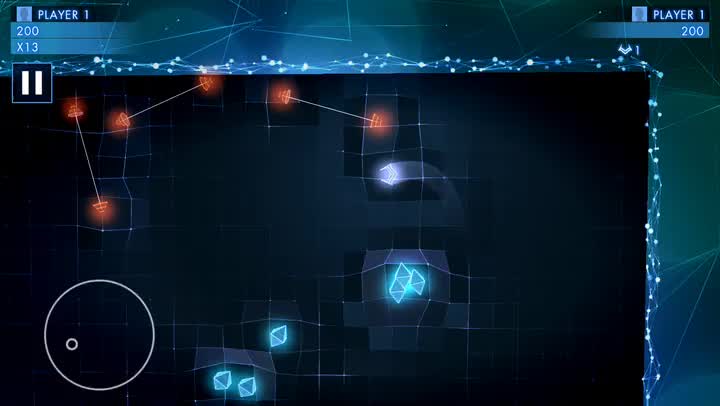 The controls in the game are fairly simple and straightforward, considering that this is designed for touch screens. A virtual joystick on the left side will control your ship’s movement, while another joystick on the right allows you to aim and shoot. These joysticks aren’t stuck in the corner either — they follow your thumbs around, which can be both good and bad (sometimes you’ll block your own view). However, if you don’t want to deal with two joysticks, you can just use the one for movement, and your ship can automatically target enemies and fire on its own. The controls can be further customized in the options, with things like draggable or fixed joysticks, toggling auto fire on or off, switching the joysticks around for left-handed people, and there is also support for MFi controllers if you happen to have one.

In addition to the variety of game modes that Dimensions offers, there are companion drones that you can use in the Adventure mode that aid you in battle. These provide extra firepower, can ram or snipe enemies, or can even help you collect geoms (the green things enemies leave behind once defeated that increase your score multiplier). To add to that, your ship can get new super abilities that can clear the battlefield and turn the tide of battle in your favor, such as Homing, Black Hole, and Turret. Of course, all of these can be obtained after you reach a certain point in the game — you have to earn this kind of stuff, you know?

Even though I’ve played this same game on my computer, I’m thoroughly enjoying having it on my iOS devices as well. The graphics are stunning, the music gets your adrenaline going, the customizable controls are simple, and the gameplay is fun and fairly challenging. There is also full iCloud support for game saves so you can pick up where you left off, and you can compete with friends for the best score. I just wish that this had a local multiplayer option like the original version, but I suppose I’ll just have to keep using my computer for that.

I highly recommend checking out Geometry Wars 3: Dimensions if you’re a dual-stick shooter fan or just enjoy the Geometry Wars games. Even if you have this title on a console or your computer, it’s worth buying it again just to have it on-the-go.

Geometry Wars 3: Dimensions can be found on the App Store as a universal download for $4.99. 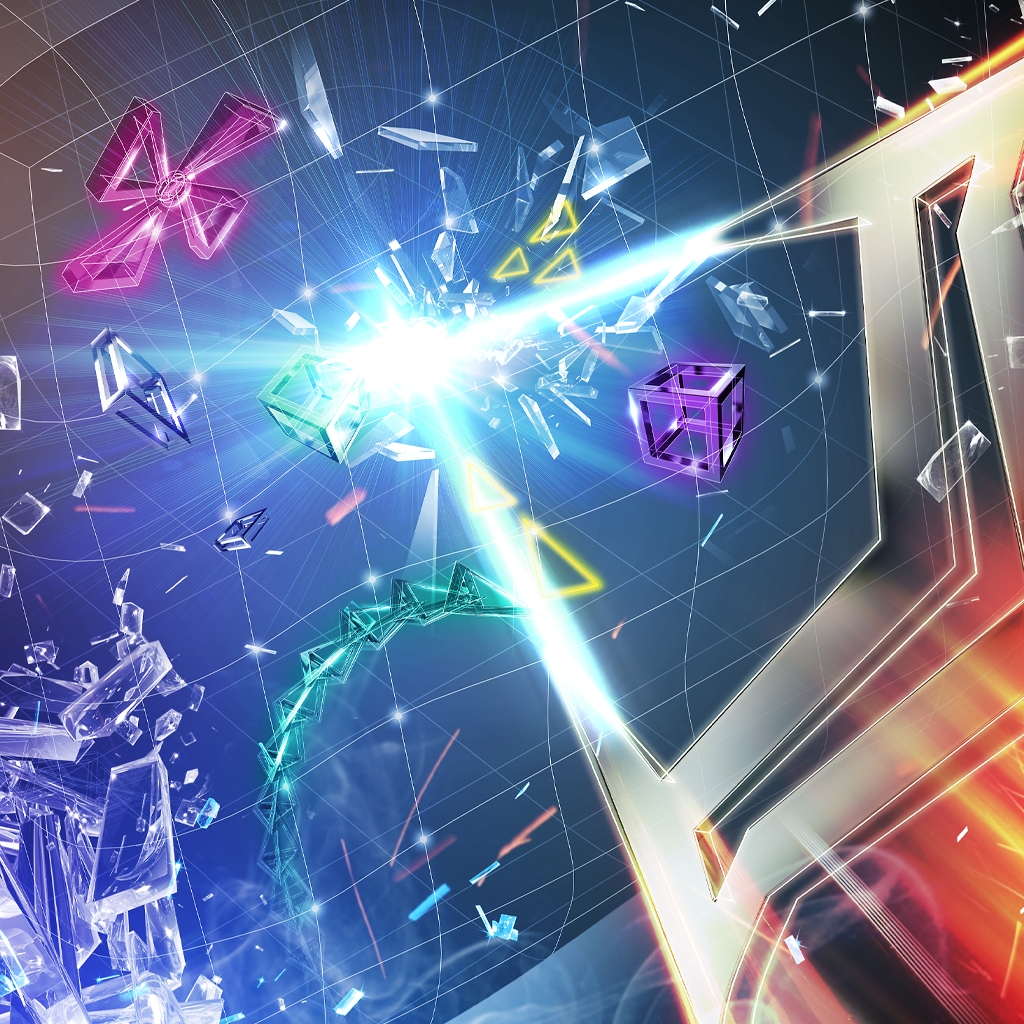 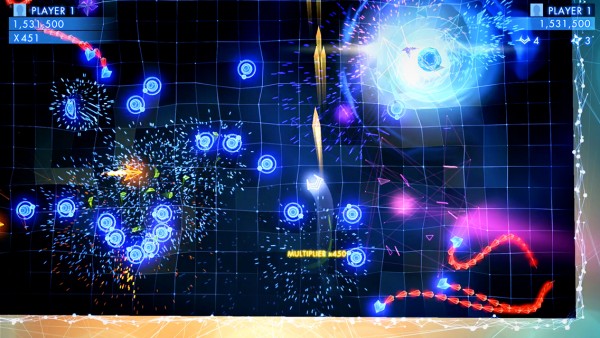 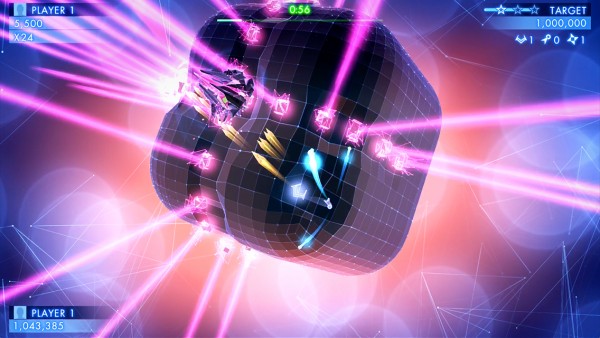 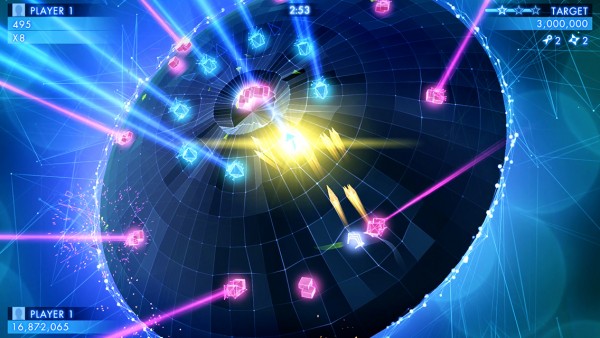 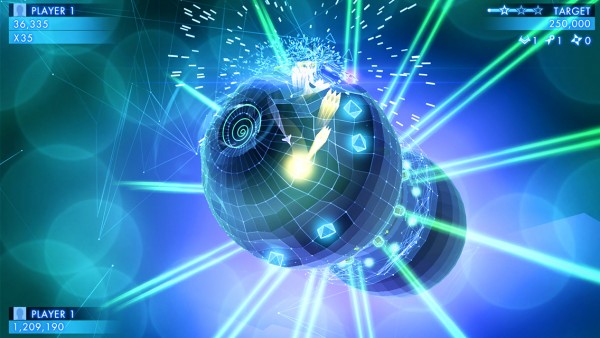 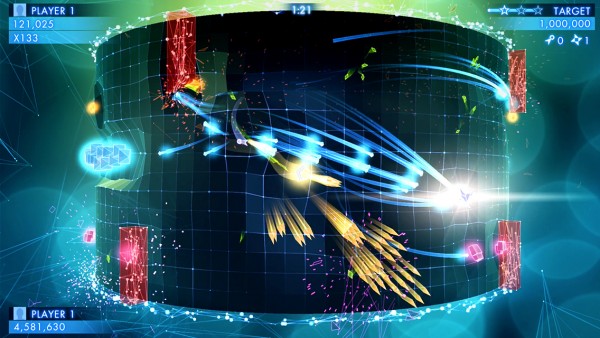 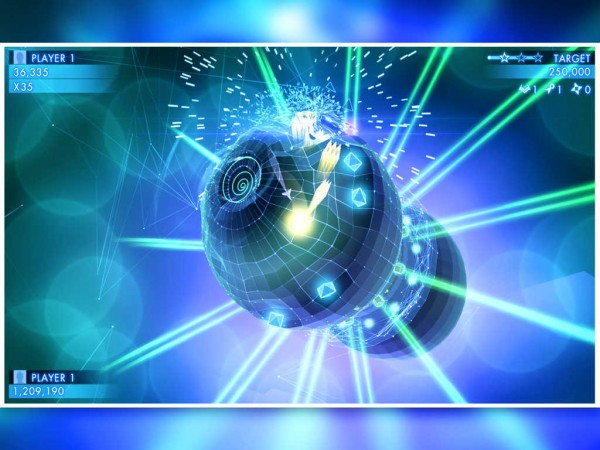 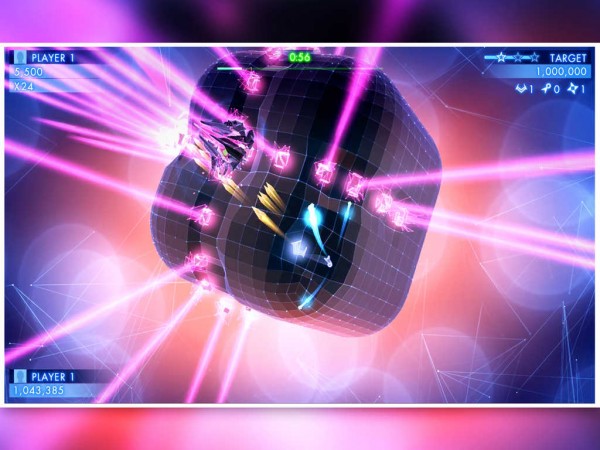 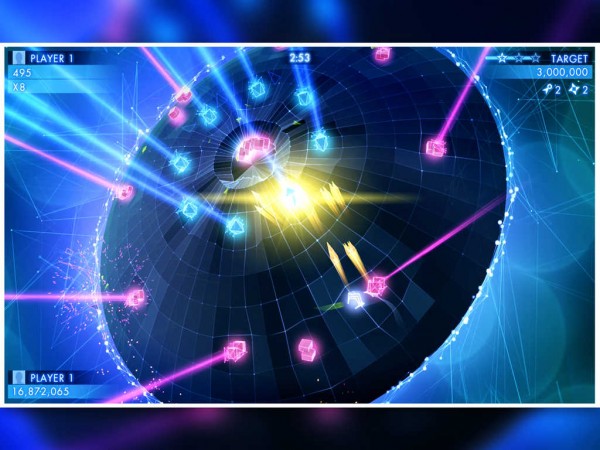 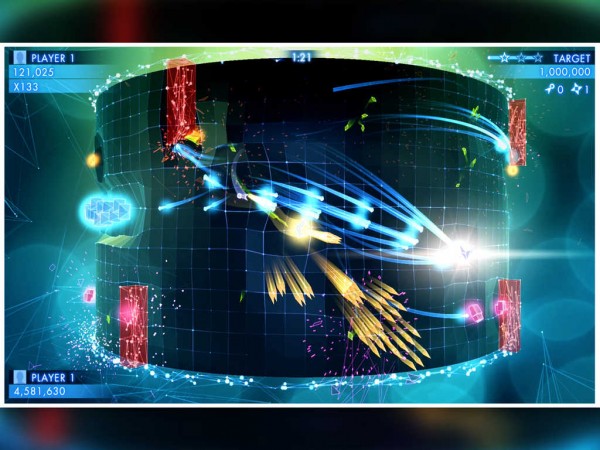 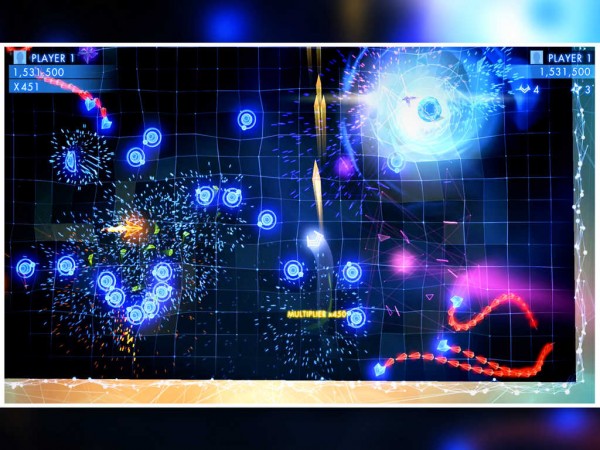 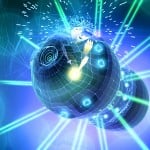