You are using an outdated browser. Please upgrade your browser to improve your experience.
by Christine Chan
April 1, 2016 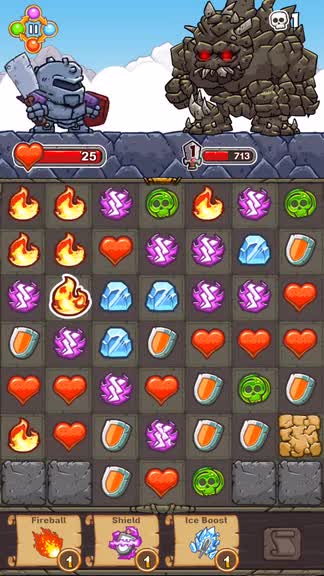 Good Knight Story (Free) by Turbo Chilli Pty Ltd is a humorous match-three RPG game that packs in a challenge among plenty of parodies and references. If you enjoyed games like You Must Build A Boat and Hero Emblems, then you are going to love what Good Knight Story brings to the table.

Even though I do a decent amount of gaming on my consoles at home and on-the-go, I still turn to my iPhone 6s Plus for a large chunk of my total game time. That’s because the thing is always with me, no matter where I am, and there are plenty of games that I can pick up and play for a few minutes at a time. Plus, my favorite genres these days are puzzles and RPGs, and there are a handful of them to choose from on iOS. Even though I’ve gone through what I think is a good chunk of them already, I can’t help but notice when a new one hits the App Store, and that’s just what happened this week with Good Knight Story. 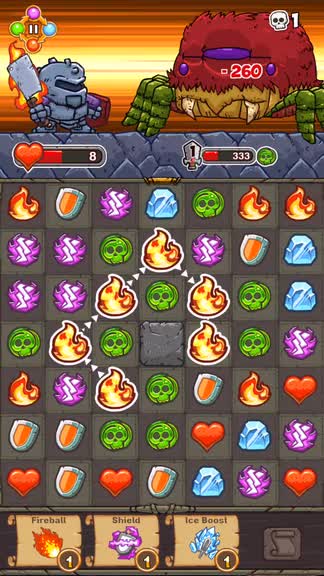 In terms of visuals, Good Knight Story carries a somewhat goofy but cartoonish aesthetic that will definitely appeal to most people. Despite that, I found that the game packs in a lot of detail when it comes to the various environments, characters and enemy monsters, and even items like treasure chests and gear. The colors also range from the bright and lush outdoors to dark and dingy dungeons, and there are cool effects in the background as you get a long chain of matches. Animations in Good Knight Story are incredibly smooth and fluid, so I had no issues with lag on my iPhone 6s Plus. The game also has a quirky, folk-like soundtrack and realistic sound effects that make you truly feel like you’re in battle. I must say, the whole visuals and audio package that this game gives you is pretty immersive, which is always a good thing.

Like other games of this kind, there is a world map and you’ll have to make your way through the game one stage at a time. But to spice things up, there is an actual story behind everything, which gets uncovered as you progress. It starts off with some knights in a pub having a good time, and then things go dark. When your knight wakes up, he finds himself in a dungeon and must battle his way through to get back to the outside world. It’s an interesting little plot, and the one-liners, parodies, and references that are sprinkled throughout keep everything engaging, as you’ll just want to find out what happens next, or what else they’ll refer to in this world. The stages also have three stars that you can earn, which is dependent on your score by the end of the level. A different objective awaits you for each stage, such as just killing the monsters or gathering up all of the keys or meat, so things are kept fresh and interesting. The faster you complete it, the more stars and points you’ll earn. Coins are also awarded at the end of each successful level, and the game is fairly generous with them, so it’s not hard to save up a bit to get much-needed weapon and power-up upgrades.

The best part about Good Knight Story is the matching system. Instead of having to swap adjacent pieces or moving tiles around for matches, all you have to do is draw a line that connects the gems together. The line can go horizontally, vertically, and even diagonally, so the possibilities for matches are far and wide compared to some other games out there. For a match to count, it has to include at least three pieces, but if you get a chain of at least six or more, the background at the top changes to indicate a stronger attack. And if you create even longer connections, then you create a special bomb piece that will destroy all tiles in a “+” shape on the grid.

With Good Knight Story, there are several different types of tiles on the screen: fire, ice, lighting, and poison. There are also shields and hearts, which mean allowing your knight to defend and heal himself, respectively. With the elemental pieces, those will allow your knight to attack foes, but be careful — there is a rock-paper-scissors mechanic here, where an element is strong against one but weak to another. For your reference, a diagram can be found in the upper left corner, so you should always have the advantage in battle, as long as the right pieces are laid out for you.

As mentioned, there are shields and hearts that will come in handy. This is because each monster has a turn counter on them, and when the number reaches zero, that means that they are able to attack you after you make your move. It’s important to note that because if you can match up at least three shields right before the enemy attacks, you can negate most, if not all, of the damage from the hit. The amount of damage that you block depends on your knight’s defense stat. 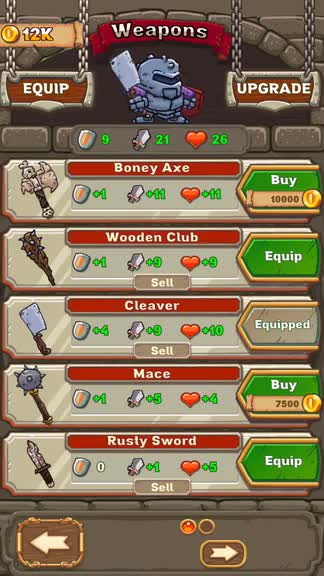 There are light elements of RPG besides the battling part, which is nice. At the end of each level, you’ll find a treasure chest that you can break open with an attack. It will grant you things like weapons, or even stat upgrades. Experience points are also earned after battle, and you have the option of upgrading one stat each time you level up. The stats can also change depending on the weapon you choose to wield, so choose wisely.

Even though the game is fairly generous when it comes to those shiny gold coins, it’s important to not spend your stash so frivolously. That’s because you’ll unlock better weapons as you go, and these can get a bit pricey. Plus, there are upgrades for each of them so you can further maximize their effectiveness. Plus, there are power-up items to unlock as well, and it costs a bit of change to purchase one and equip it in battle. However, the power-ups can be helpful to get you out of a pinch, since they can do things like attack all enemies at once (good for multiple enemies at once) or shield you from all attacks for three turns.

Good Knight Story is a free-to-play game, but I’m rather surprised by it. The game does not have an energy timer, so you can play it as long as you want for each session without having to wait for your lives to recharge. There are also no intrusive ads that interrupt you between stages, which I love. In fact, while there are video ads, they are completely optional if you just want to double your coins after successful levels. There is also a free gift of coins that you can redeem every couple of hours, so honestly, gold coins should not be too much of an issue in the game. But if you are super impatient, you can buy more through in-app purchases.

I’ve been playing Good Knight Story a bit this morning for this review, and I’m finding it pretty hard to put down. I love the style of the game’s graphics, the music is fun, and the plot is hilarious with the corny jokes and one-liners. The controls are simple enough to get used to, and the game mechanic is not too hard to get used to so it is great for everyone. The difficulty level does get ramped up a bit as you go, since there will be beefier monsters who are out for your blood, but the challenge is not too frustrating, and you don’t have to worry about timers if you lose. This is definitely a game that I would have gladly paid a few dollars for, so I’m honestly shocked that it’s free and generous. It’s a nice surprise this week, that’s for sure.

I highly recommend checking out Good Knight Story if you like action-packed match-three RPGs and enjoy a side of humorous storyline to go with it. You can find Good Knight Story on the App Store as a universal download for free. There are optional in-app purchases.

You Must Build A Boat
EightyEight Games LTD
$3.99 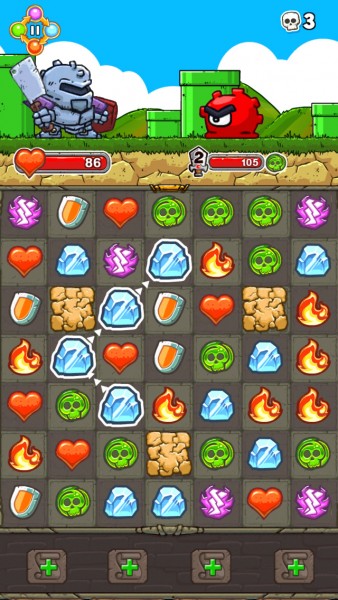 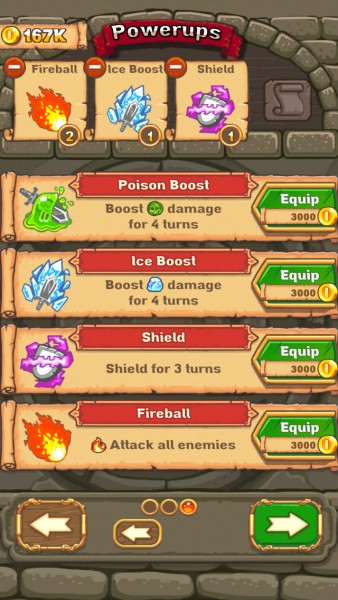 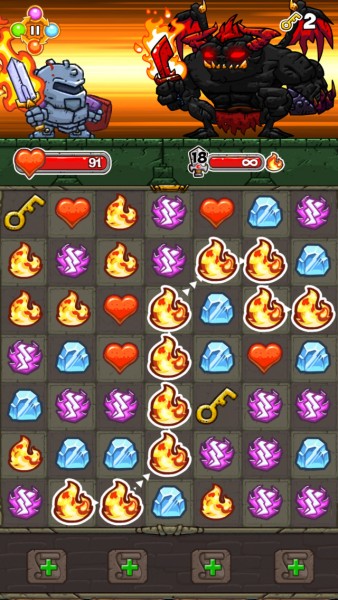 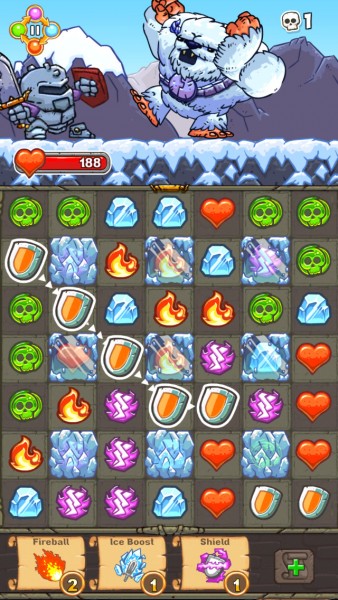 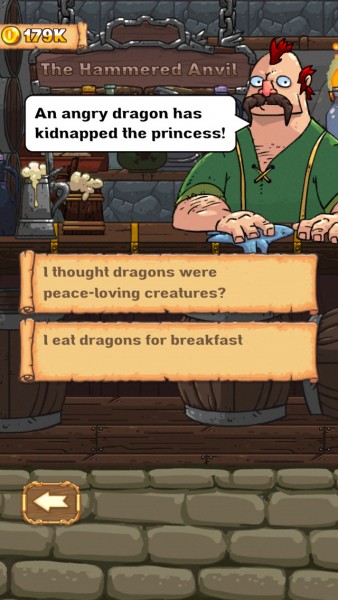