You are using an outdated browser. Please upgrade your browser to improve your experience.
by Christine Chan
August 16, 2016 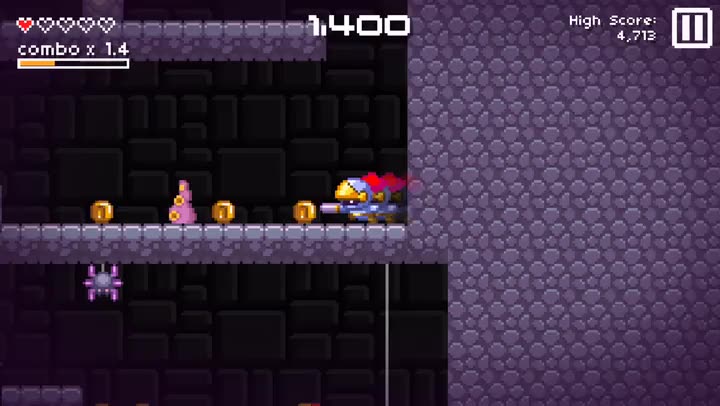 Journey Below ($2.99) by Ravenous Games Inc. is an auto-running platformer with a dash of roguelike RPG elements to it. It also features a knight who is set on saving the kingdom from an evil monster. Yes, it’s an overdone gaming trope but the real meat of the game is the challenge of an auto-running platformer. Plus, it’s from the same guys who brought you Tiny Rogue, the League of Evil franchise, Random Heroes, and Devious Dungeons, so they know a thing or two about platformers in general.

Since I was born in the late ‘80s and grew up in the ‘90s, I played a lot of platformer games back in the day. From classics like Super Mario Bros. to Sonic the Hedgehog to things like Altered Beast and X-Men, I loved them all. I didn’t have too many games back then since it was what my parents happened to buy, but ever since then, I grew an appreciation for the platformer genre in general. Even though it’s a tried-and-true formula nowadays, I can’t help but check out new platformers that hit the App Store, especially when they have a unique twist that sets them apart. Naturally, when I saw Journey Below on the App Store, I knew I had to get my hands on it. I mean, it’s from Ravenous Games and it’s a platformer with a twist — what’s not to love? 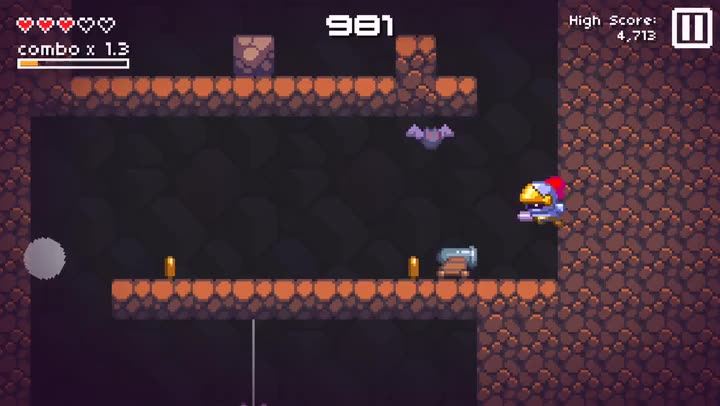 The graphics in Journey Below follow the awesome retro pixel art style that Ravenous Games is known for. If you grew up in the age of 16-bit games, then you will feel right at home with Journey Below. While all of the maps are procedurally generated, the four environments are full of fine details and textures. The character sprites, including the enemies and your own knight character, are rather cute and everything has their own unique movement patterns. Colors in the game range from bright vivids to darker, gloomier tones, but everything is rich in color. Animations are smooth and fluid in Journey Below, and the levels flow seamlessly into each other. The techno chiptune soundtrack is rather catchy and immerses you in the game. Sound effects are fun too. The only thing I noticed in terms of graphics is the fact that a white line pops up consistently in the middle of the screen as I play. Not sure what is causing this, but it does get annoying.

There are three game modes in Journey Below: Normal, Hard, and Endless. However, you’ll have to beat Normal first in order to unlock both Hard and Endless mode. In Normal, you’ll have to go through 12 randomly generated levels and then fight the boss at the end in order to beat the game. Hard Mode has faster gameplay, doesn’t have health potions in the stages so you can’t heal up, and you only start with three health points. Endless is a test to see how deep in the dungeon you can get before the monsters finally get to you. Killing enemies in Journey Below nets you points, and if you can get a combo streak going, the more points you’ll get due to the multiplier bonus. Once you reach the end of a level, you’ll have the option of choosing one of three randomly generated character upgrades before you move on to the next area. You can collect the gold coins for more points, and make sure to watch for health potions to restore hearts, which are shown in the upper left corner. Getting hit or running into an enemy deduct a heart from your gauge, and it’s game over if you’re out (unless you got lucky with the resurrection upgrade). When the run ends, you’ll have to start over from the beginning, though the maps and upgrades will be randomized so it’s never the same thing twice. 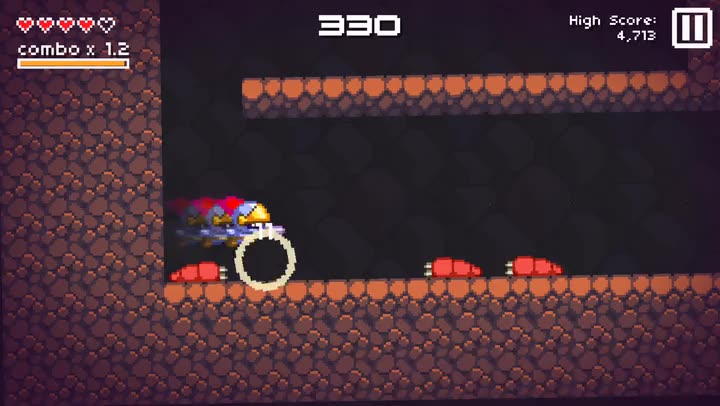 Since Journey Below is an auto-runner, that means your knight is constantly moving, turning only once he hits the wall. You jump by tapping on the left side of the screen, and you can perform a dash attack by tapping on the right half of the screen. Some character upgrades let you do a double jump, attack in midair, or even giving your dash attack a longer range, so it’s important to use those to your advantage if you have them. While the controls sound easy enough, sometimes your knight’s movement is a bit trickier due to the layout of obstacles and incoming enemies. Timing is important, so make sure to jump and dash attack at the right moments for maximum efficiency.

I’ve been playing Journey Below all morning and have been finding it to be a delight to play. The game is designed for short to medium gaming sessions, so it’s great when you have a few minutes to spare. As a fan of roguelikes, I like the challenge that each new run brings, and the controls are simple to learn but difficult to master, as they should be. I love Ravenous Games’ pixel art style, so this is another charming game in terms of visuals and music, though I still have the white line constantly appearing in the middle (hope that’s fixed). The game is high in replay value due to the randomly generated maps and levels, tons of achievements, and the fact that it’s a roguelike high score chaser means you’ll always be coming back.

I recommend giving Journey Below a try if you like auto-runner platformers with a splash of roguelike RPG elements thrown into the mix. You can get Journey Below on the App Store as a universal download for your iPhone and iPad for just $2.99. There are no in-app purchases. 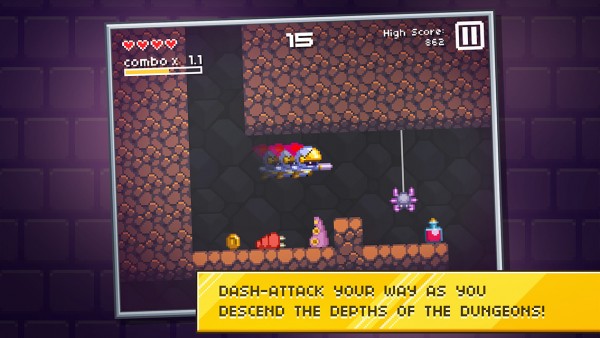 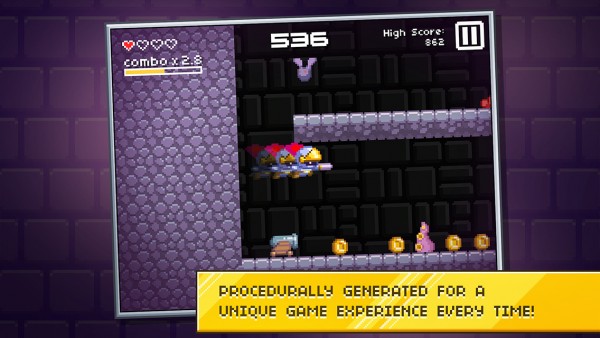 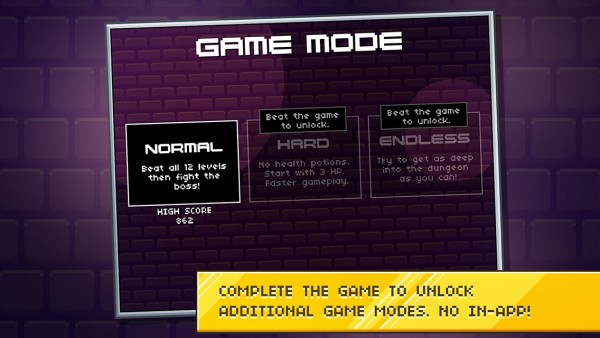 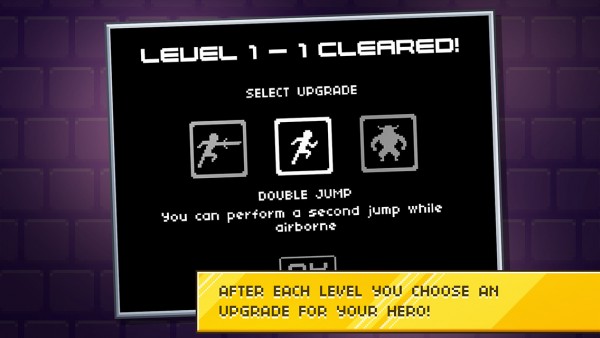 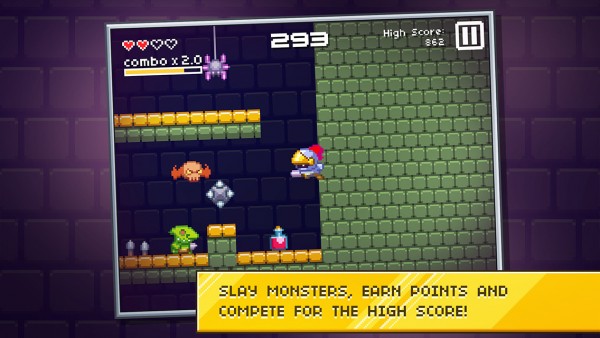 Elephants Can’t Jump, or can they?
Nothing found :(
Try something else