You are using an outdated browser. Please upgrade your browser to improve your experience.
by Christine Chan
March 3, 2016 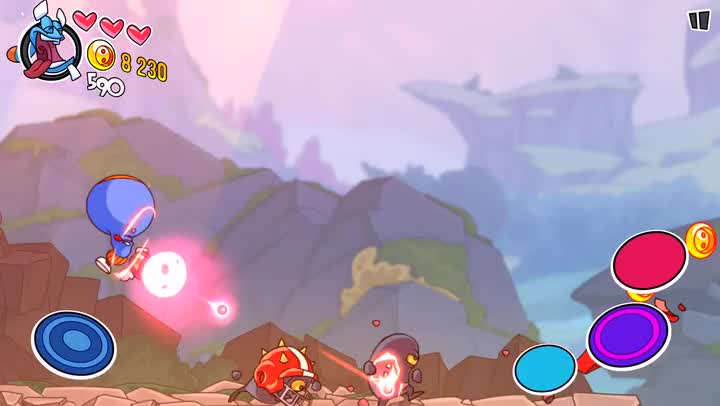 We’ve all encountered that problem before while doing laundry: one of our socks is missing, thus making a pair (possibly your favorite one) incomplete and somewhat useless if you like to match. For the average Joe, we just wonder where the missing sock has wandered off to, but may not think too much of it. But if you’re the guys behind Power Place Publishing, then you come up with a crazy, action-packed run-and-gun game that is based on a sock who is in search of his missing brother. I’m a big fan of development studios that can come up with completely original ideas for games and apps, so when I first heard of Lost Socks: Naughty Brothers, I was intrigued right from the start. Now that it is finally available, I must say that it certainly does not disappoint. 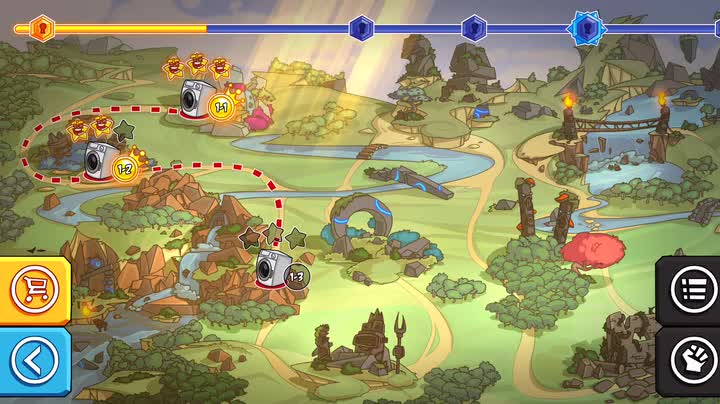 Lost Socks: Naughty Brothers has a stunningly gorgeous and polished art style that reminds me of comic books and graphic novels. There is a nice mix of cutscenes and gameplay, so it’s rather balanced in what you see on the screen. The game makes use of bright and vibrant colors and nice light rendering that make things seem flashy and a bit over-the-top, which fits with the overall theme. The levels are also incredibly detailed with small details and textures, and the world of Lost Socks is rather vast — I mean, how else are socks going to get lost? It has to be a big world out there for our cozy feet covers, right? The character models are rendered nicely with fluid movements, and the animations are smooth with no lag overall. There is also an upbeat and quirky soundtrack that is a delight to listen to, and the humorous and fun sound effects add a great finishing touch.

In Lost Socks, players will have to make their way through a large world map in order to find the missing sock brother and defeat the boss in order to get back home again. Like a lot of games, the levels are in a linear order, and you have to clear the previous stage in order to move on to the next. Up to three stars can also be earned on these stages, which depend entirely on how well you do. There are also missions that you can complete to earn more button coins, which are needed for better weapons, power-ups, and even character perks. However, all of this must be earned — the game is fairly difficult, and will take a lot of time and practice in order to be pretty good at it. Despite the difficulty level, the game can still be played by more casual gamers, but just be warned — it does get frustrating at times if you don’t time things properly.

Controls in the game are simple and straightforward. At the beginning of each level, your sock will run forward automatically, so you don’t have to worry about direction. Though this also makes the game more challenging, since you can’t go back, you’re going to have to make sure that you get the necessary actions right. In the bottom left corner is a button to jump: do quick taps on this to do hops, hold it down for a longer jump, or tap it again while in the air to puff up like a parachute and glide down. You have to understand which type of jump is best for the situations that come up on you, and it does take time to master. In the bottom right sector of the screen, you have a purple button for dashing (quickly sprint forward through hazards, and you are granted invincibility during the dash period), a blue button for firing your light weapon, and a red button for using your heavy weapon. Before you start a stage, you’re able to select which light and heavy weapon you want to equip, so you can always change gear to better suit what you’re up against after a few attempts. 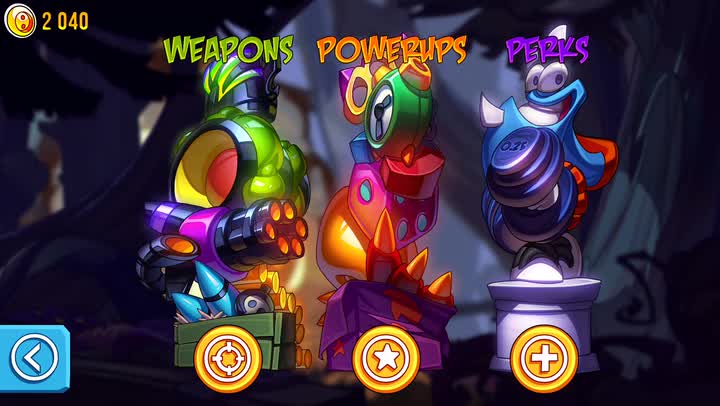 In order to be good at Lost Socks: Naughty Brothers, you will have to master the timing and proper use of the controls, and believe me, it will take some time, even if you are a seasoned gamer. There is a brief tutorial in the beginning that will explain all of the controls to you, so I would recommend paying close attention to that. It’s a bit annoying that you can’t customize the controls to adjust the positioning, spacing, and even size of the buttons though, because I often found myself pressing the wrong button at dangerous times because they were a bit large and I have small hands.

To make things even more interesting in the game, there are some awesome combos that you can perform for bonus points on a level. You can view the combo list by tapping on the fist button on the world map screen, and it will tell you all of the available combos in the game and what you need to do to perform them. These can be pretty tricky to do, since many of them need exact timing, but they’re fun to learn and attempt, that’s for sure. With so many combos, as well as achievements, stars, and missions, it’s needless to say that Lost Socks: Naughty Brothers has some immensely high replay value.

Due to the difficult nature of the game, I’m still in the early stages of Lost Socks: Naughty Brothers. However, I am enjoying every moment of it, even though I just want to slam my phone down at times. The graphic style of the game is beautiful and reminiscent of Rayman and Earthworm Jim, so fans of those games will feel right at home here. The music and sounds are fun, and the controls are easy enough to understand, though I wish there was some customization options to make it more responsive. There are plenty of challenging levels and boss fights, missions to complete, weapons and upgrades to earn, and combos to perform. The high replay value of Lost Socks: Naughty Brothers is sure to keep you busy for quite some time. 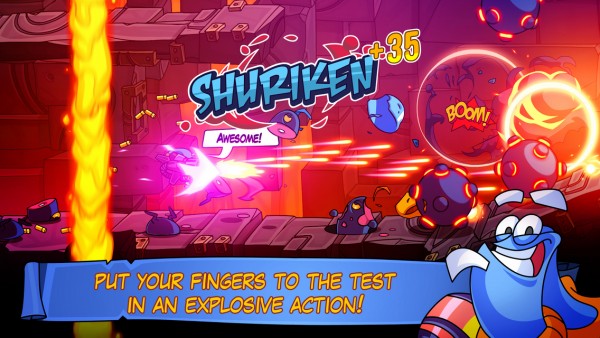 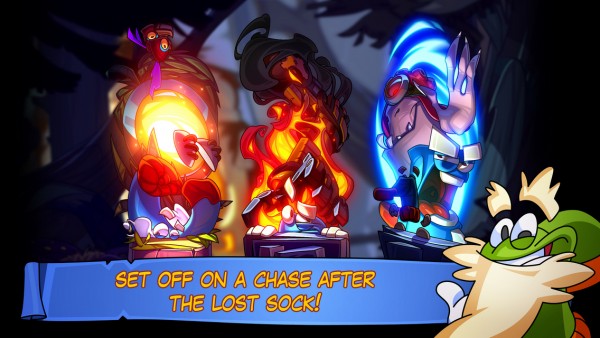 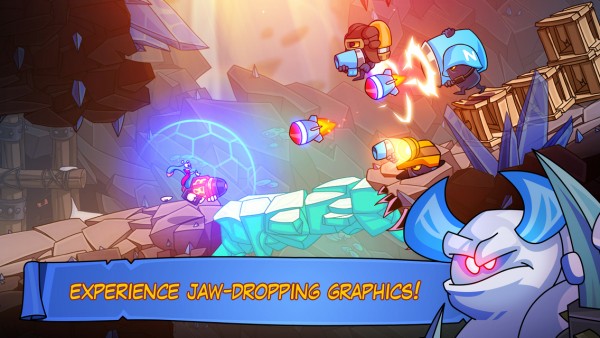 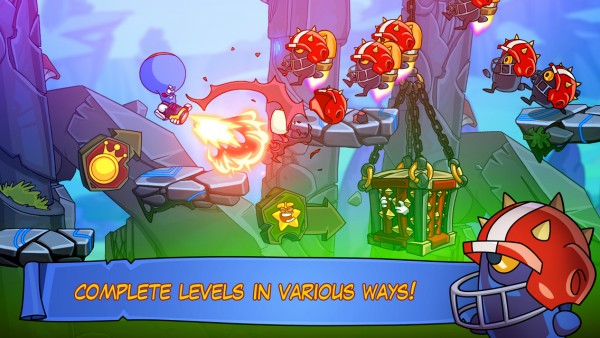 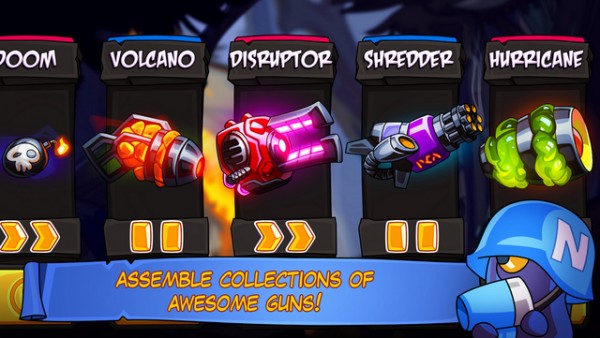