You are using an outdated browser. Please upgrade your browser to improve your experience.
by Christine Chan
June 9, 2016 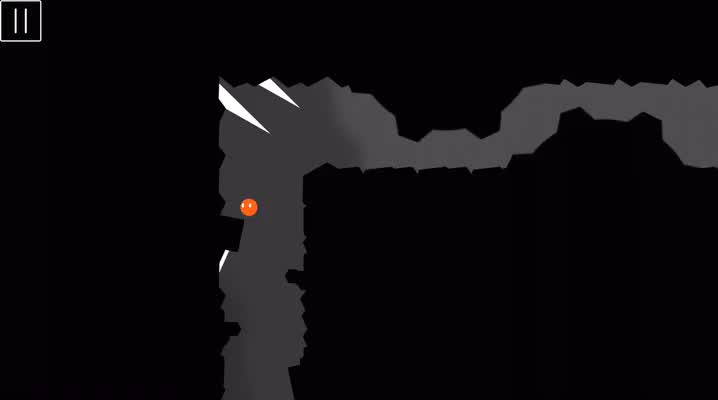 MAJUSCULA ($0.99) by Vince Hegedus is a super challenging platformer that’s based on the wonderful world of typefaces. If you are the kind of person who loves a skill-based platformer and also enjoys learning about typography, then this is a match made in heaven.

As a kid, I grew up with the classic games like Super Mario Bros. and Sonic. These games were big parts of my childhood, and they also ignited the spark of love that I have for platformer games. They’re like the ultimate challenge at the time, so as I got older, I always love seeing new titles emerge that remind me of my glorious childhood. In recent years, I’ve done a lot of writing on my laptop and iPhone, but one thing that struck out to me about digitally writing was typography. In fact, it’s been a topic that has interested me greatly for the past few years, as I’ve grown fond of specific typefaces and deplore others. I am no expert in the field, but it’s something I find fascinating. 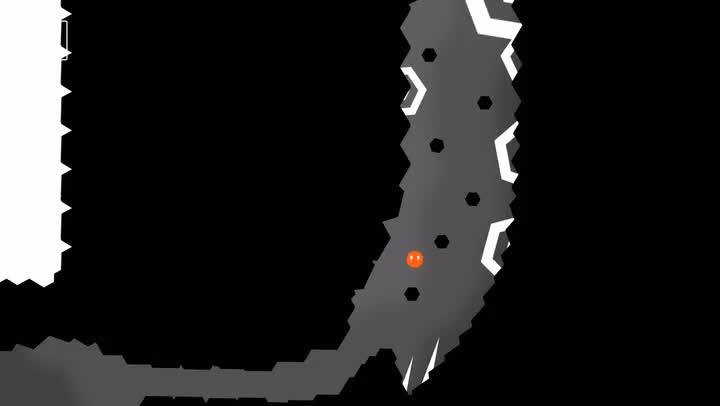 Naturally, when I heard about an upcoming game that combined both platformer with typography, I was enthralled. And now that it is on the App Store, I’m excited to have my hands on it. From my initial first impression though, let me warn you — this game is not for the faint of heart.

In terms of visuals, MAJUSCULA is beautiful with a minimalistic aesthetic. The game focuses on various hues of black, gray, and white, giving it that popular LIMBO feel. The only splash of color that you’ll see is the orange of the ball that you control, who is just trying to make it through the world of typography. The physics involved in the game are fairly realistic, so there’s no fake game mechanics here. Animations are buttery smooth and there is no lag in the frame rate, which is great since death is always around the corner in MAJUSCULA. The soundtrack by Essa is ambient and soothing, adding another layer of depth to the game.

Since MAJUSCULA is a game about typography, it has an interesting level concept. Each stage is in the form of a letter, and when you clear it, you’ll learn about a typeface that starts with that letter, such as who designed it, when it was created, and even how it looks (all data from Wikipedia). Now, since each level is a letter, and there are only 26 letters in the alphabet, there are only 26 levels in the game. While this may not seem like a lot (and it really isn’t), I’ll tell you now: the game can be incredibly difficult. So while there won’t be more than 26 stages, you’ll be spending a lot of time trying to survive flawlessly during those few levels because it’s easier said than done. You also can’t go back and replay levels either, as it is one streamlined journey. However, there is a reset button if you want to start over from “A.” 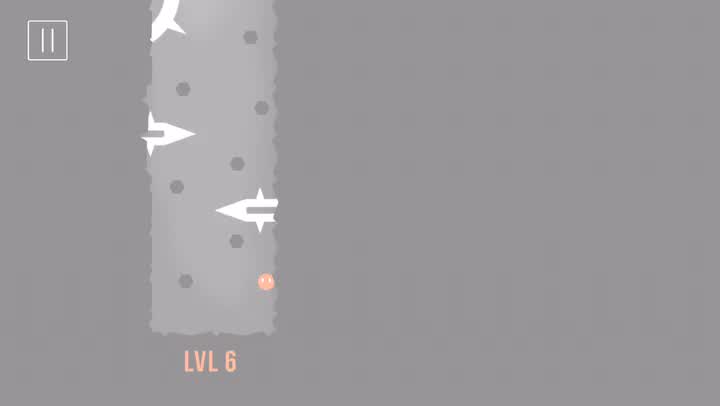 Controls in the game are simple enough — just tap the left half of the screen to go left, and the right to go right. You control a bouncing orange ball, which I’m assuming is the dot that is found in lowercase “i,” “j,” or maybe it’s just a period. The dot is automatically bouncing and you have no control of the bounce, which makes the game a bit more challenging than you’d originally think. Because of this, you’ll have to time your horizontal movements carefully, as there are dangerous hazards and obstacles like spikes, pools, rotating cogs, and more. As they always say, it’s easy to play, but hard to master — you need to muster up all of your skills in order to beat this platformer.

While the objective of each stage is to reach the end of the level (marked by a flag), the game also has a point system. I’m honestly not sure how the scoring is done, but it seems that you points based on how far you manage to get or how fast you complete the stage. The game is not clear on how the scoring is done, so I can’t be too certain. The point of the scoring system is for the Game Center leaderboards though, if you’re into that.

I have been waiting for MAJUSCULA for a few weeks now, and I’m not disappointed with the final result. The game is gorgeous with minimalistic graphics and the atmospheric soundtrack. The controls are intuitive and don’t take a lot of time to learn, but the timing is everything so it is still hard to master. The gameplay itself is rather difficult and challenging, though this may not appeal to casual gamers. But if you have any interest in typography, then this game is worth checking out. I just wish that there was some clarification on how the scoring system worked, because it’s pretty vague.

I recommend giving MAJUSCULA a try if you’re a fan of nail-biting platformers and like to learn about typography. You can find MAJUSCULA on the App Store as a universal download for the iPhone and iPad for just $0.99. There are no in-app purchases. 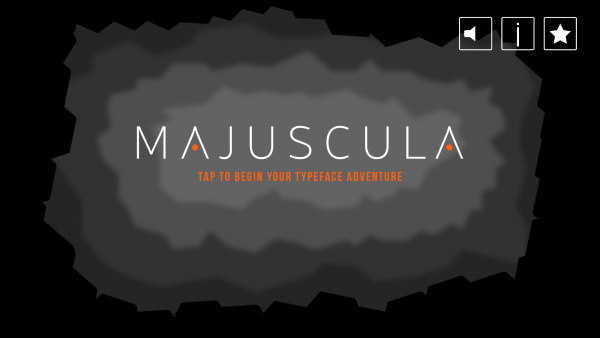 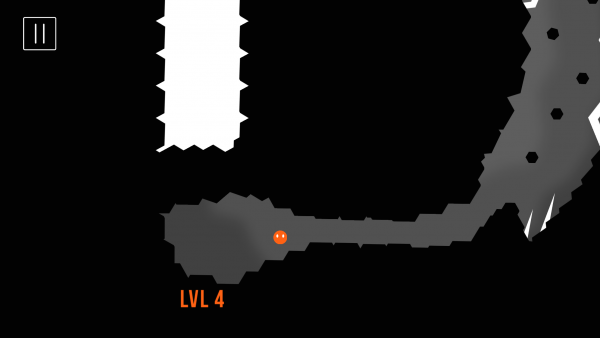 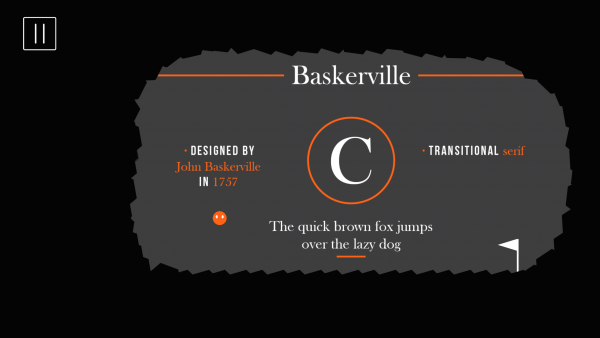 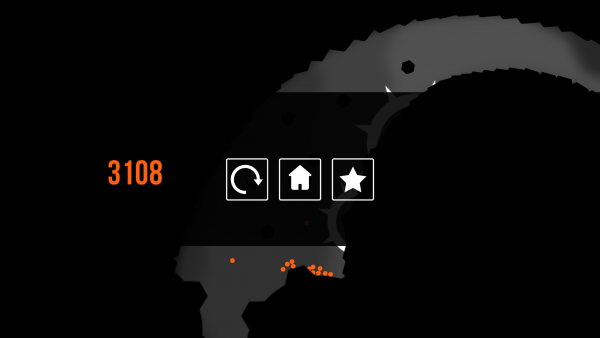 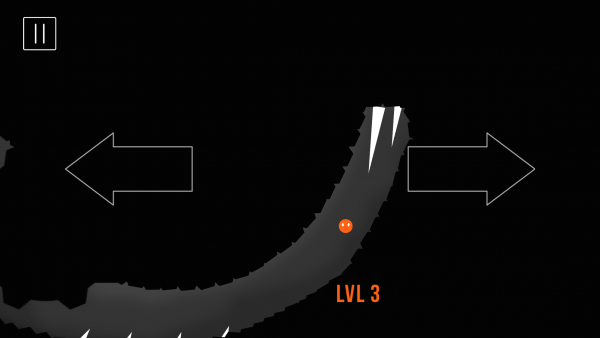